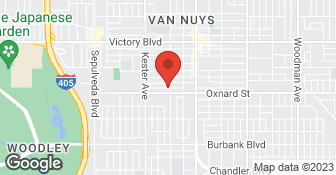 We manufacture removable mesh pool fencing in our 14,000 square foot factory in Van Nuys. We ship our systems all over the world to authorized trained distributors. We have between 25 and 35 employees. We also have FOUR UNITED STATES PATENTS involving child safety around swimming pools. All of our dealers as well as our office in Van Nuys are required to have California contractors license for pool fencing installations. We offer FREE estimates. Additional email: info@guardianpoolfence.com. Additional phone is TOLL FREE at 800-366-SAFE(7233)...

Jim, who came out and gave us a quote was excellent; very professional and knowledgeable. Same for Jesus, who did the installation. It looks better than we thought it would - we're very pleased.

Very good service, on time, and very professional. Would definitely use them again.

very pleased with our gate and the service

I don't remember when they did the job perhaps 8mo ago and same for price, I would need to go to my receipts. Except minor glitches I still have to give 5stars to these guys ; and that speaks volume because I would easily take a point down for issues but these guys are so good that I cannot. Thats a 5 stars family company. I am a Real Estate Agent and I will refer them if any of my clients need this type of service. Dad & son thanks for the job! Stéphane -

The salesman was knowledgeable and punctual, and installation was made in a timely manner. I definitely recommend this company.

Description of Work
My first grandchild is now walking, so I wanted a pool fence that was sturdy but could be removed easily, and would not be an "eyesore". I was concerned about the drilling of holes in my deck as well, but the size of the holes are the size of a dime and I was provided with "caps" for when the fence is removed. The fence that was installed is perfect and I feel that I don't have to follow my granddaughter around now when she's in my backyard.

Went very smoothly. Rep was there on time both for consultation/estimate and for installation.

Description of Work
Pool fence needed to be put up.

They were efficient and did a great job.

Description of Work
They put a fence around my pool

I have a small dog, age 15, now blind and deaf, who fell into the deep end of the pool at dusk a few months ago-- luckily, I was close by and scooped her out, but realized that she was at risk as much as any child. I subsequently went outside with her EVERY SINGLE time she had to go out, be it the middle of the night, early morning hours, wind, rain, etc. After a couple months of this routine, I knew I had to fix this situation.I had installed a mesh fence 25 years ago when the grandkids came back home to live, but we subsequently removed it after they grew up and moved away....being in retirement years, it didn't seem necessary to have it fenced off until this recent fateful night that my little poodle fell in. Blind animals are horribly at risk, and since our dogs ARE our children nowadays, we decided to protect them as such. I called Guardian's office, and a quick appointment was scheduled. Jim came out and measured, brought me several samples, and explained the pros and cons of the different color of mesh, canvas color choices, size of poles, whether to make it free-standing or drill holes, etc. He measured, then gave me a written estimate. I told him I would mull it over and then call them to let them know if I was going to go ahead with it. He went to leave, and I had this sudden "come-to-Jesus" moment and realized that he was a straight-shooter and that this company, and the way he represented it and himself, was as good as it gets. I ran out after him, caught him getting ready to pull out of my driveway, and told him to schedule it -- I didn't bother to get other estimates...I remember we had paid a few hundred dollars less back in early 1990 or thereabouts, and Guardian's price wasn't at all out of line, considering the # of years since I first contracted for a fence. He scheduled me for installation one week later -- the installer was so neat, precise -- everything was done with care, and absolutely nothing was left behind or out of place. We talked about where to install the gate that I ordered with the fence, and other than that, it was installed perfectly and without any issues. Bottom line? Absolutely A++ in my book!!! I hope that I can personally refer some business towards them -- they really made this an easy homeowner upgrade.

Description of Work
Installed 48" high mesh fencing around my swimming pool, attaching it on each end-- one where it dead-ended into a fence post, and the other end attached to a block wall.

It didn't.... You need to pay attention to your question that says..... Were services performed by the provider? You are making me fill out this form complete when I did not use the provider. I called about 6 months ago and asked you remove this provider from popping up all the time and you said you would. Now will you please remove it.

Description of Work
Nothing...... I did not use the provider and I believe it was because they did not work in this area.

Ear [removed member name]: I don't know why you were contacted by from our office. No one that I can find in our office has made contact with you. If you are contacted by our office again, please find out who it was and I will stop it once and for all. I apologise for these interuptions in your day. I wish I knew who was mnaking this contact with you so I could stop it permanently. Sincerely, Steve Sadinsky, President
5.0

Everything went smooth. They had good suggestions about how to run the fence. along the pool. Extremely friendly and were able to give good insight to the new area I just moved to. I would use them again. :)

Thank you very much for your positive review on Angie's List. Our company works very hard to make your total experience with our company a positive one. All of our employees that install our pool fence systems are trained in our installation procedures to help insure a safe fence for your children. We are a family owned business and it's nice to hear from our customers that we have done our job right. Thanks again for your kind review. We appreciate your taking the time to write this review. Best Regards, Steve Sadinsky, CEO

**WE OFFER THE LOWEST PRICE GUARANTEED** Mulholland Brand is a high-end direct manufacturer of low maintenance aluminum gates, fences, railings, and pergolas. For direct to consumer installations, we only offer the best quality to customers. With over 25 years of experience and a 4.9/5 star average user rating on Google and Yelp, you can count on us to do an amazing job. If you are looking for the highest quality manufacturing and installations, call us today at 818-639-3820 or check us out at http://www.mulhollandbrand.com for great service, great passion, and the best security gates in Los Angeles!  …

At Isaacs’s Ironworks we specialize in custom work serving the greater Los Angeles area and surrounding for over 19 years. A one time customer is something we try to avoid, that is why we devote so much time and energy to understanding your needs and getting them done quickly and cost effectively. We work with architects and designers and can create a beautiful structural & misc. steel product from blue print or your own design weather you are building from scratch or remodeling. At Isaac’s Ironworks we take much pride at our staff of experienced representative. When you call us you can expect to talk with someone who has knowledge and experience and truly understand your need, and the ability to provide to you when you need it. You can always count on us with innovation and customer service. We have in house design capabilities, and can handle all type of custom work. As Seen on Ellen - http://www.youtube.com/watch?v=N2geYFcqd2Y&feature=player_embedded. Additional fax - (818) 982-1984 wining.  …

Guardian Pool Fence Systems Inc offers the following services: Manufacture and installation of removable mesh pool fencing.Our pool fences are approved by the State of California and most municipalities in California. We are approved to meet the City of Los Angeles building code and the County of Los Angeles building code. No other pool fence company has been approved to meet this requirement.