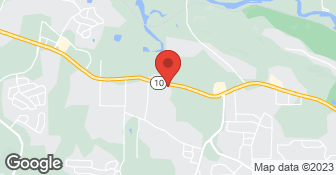 The Good Earth Garden Center has been serving Central Arkansas for over 40 years and has grown from primarily a growing facility into a full service garden center, including the most award-winning landscape team in Arkansas. For more information about our landscape services, please email us at landscaping@thegoodearthgarden.com

They did all of that work in three days. There were three guys. They knocked it out in three days and it was beautiful. We purchased plants at Good Earth before, so we knew of them. Then Chad Oppenheimer, I think his name was, is the landscape architect and he was really good to work with.

Description of Work
They removed all of the stones the size of an egg. The previous home owners put the stones into the beds as mulch, so most of the plants that were in there, under all this stone, were either dying or not pretty and not doing well. They had to come in and remove all those stones. This is a long house, a one story house, almost like a Ranch. So, there's a bed on the side with stone and two beds in the front with stone, so they had to move all of those stones over to one side where I told them they could dump them because I had a mission for those stones. Then they had to dig out the fill that was put in by the contract and put in good garden soil, amended garden soil, so that the new plants could then thrive. Once they removed the stones, they had to excavate the hydrangea bushes, that we eliminated because they were dying, a large Japanese maple that was dead, and there were some other things that were discarded, but we saved 6 azalea bushes at my request and 3 or 4 boxwoods. Good Earth has a landscape architect so he had done a design for our work with our approval. So, we worked with him and they did manage to save those. There were actually 6 Encore azaleas and 3 boxwoods. He worked those into the plan and just put in another Japanese maple, this time a green one, and changed that location a little bit, he added some camellia bushes and lot more azalea bushes and ferns. He just basically gave it an entirely new look, so what we have now are evergreens all year around and these Encore azaleas that bloom sometimes 3 times a year. They're in their second bloom now. So, that brings a lot of color into the yard. So, that project turned out really well.

They are great at the store.

Description of Work
They did no service. I was at the store. They always know exactly what you need.

Description of Work
Put in flower gardens and the mulch they used had termites in it which did damage to my house. It is possible they didn't know the mulch was infested. This happened a year later. Also had a fence installed that was done quite well.

Description of Work
Added and revamped landscaping. Slow to get project moving and were overpriced, but the end result was very pleasing.

In front of our house we had 25 year old bushes that had grown tall and were unsightly. We also had crepe myrtle trees. The old bushes were difficult to remove but they had a tractor, The new plants were planted without problems and the ground covered with mulch. They did break a sprinkler pipe but fixed it. The only problem was they were a day late starting. They were very professional. We are extremely pleased with the design and final appearance of the landscaping project. I give the landscape architect an A+ and the workers an A.

Description of Work
The Good Earth designed a new land scheme. On arrival they removed the old bushes and planted dog wood trees and a variety of bushes and shrubs. They also planted flowers.

Description of Work
I needed advice regarding plant disease and insect treatment. They found someone with knowledge and helped me select items for purchase.

The Good Earth Garden Center were the ones who responded to my phone call. They were reasonable and I liked their ideas. I did have other people in mind, but they never showed up. They were recommended to me and didn't return the phone calls or whatever because they were too busy with other jobs I guess. The guy from The Good Earth Garden Center showed up and talked to me and I liked his price and then I went with him. I think they're expensive, but that might just be the way landscapers cost.

Description of Work
I have been going to this place for years and about three weeks ago I went to talk with someone about doing landscaping in my backyard and the one person that I did talk to rushed through the conversation and didn't really listen to me at all. I even gave all my contact information and what I was wanting to get done to the front desk person but needless to say I guess they didn't want or need my business because I never got a call back from them.

My experience was good. They were very clean and did the work and their price was reasonable. They were willing to do the job that not many people would even come out to do. I would grade them C for responsiveness because I tried to get a hold of them a couple of times since that point of time as I had a question about the bill and they just have not responded back. I would use them again in the future if necessary.

Description of Work
I used The Good Earth Garden Center to do a dry creek bed in the backyard.

We were told that someone would phone us. One week later we still had not received a call, so we called and left a voice message. A little over a week later we received a call and were told someone would come out in a week. He did, looked over the yard, and told us in a week he would submit an estimate. After about two weeks, having not heard from him, we called and left a voice message. We have never heard from Tfhe Good Earth again.We hired Grand Designs, and they finished the project in two weeks.I can understand that this was the busy season. What baffles me is that The Good earth simply would not return our calls. They lost out on a $10,000 job.I will never buy anything from them again.

Description of Work
The first part of June, 2011, we visited The Good Earth to talk to their landscape department about re-soding our lawn, laying a stone pathway, and extending our sump pump drain to the curb.

We specialize in all phases of lawn maintenance, routine mowing services, mulch spreading, yard clean ups, and more! We guarantee your satisfaction, and we won’t leave until the job is done right. We pride ourselves on the quality work we provide, while delivering great customer service! Check out all the services we offer below and call -or- click to schedule a free estimate today! Contact 501-503-2630  …

Radiance is here to get your home back in shape. We provide a complete spectrum of Exterior Home services with professional and personal care for each client's needs. We are here to guide you and give you our advice based on your goal and dream. We believe in value. Call us today so we can turn your dreams into reality  …

How is The Good Earth Garden Center overall rated?

The Good Earth Garden Center is currently rated 3.8 overall out of 5.

What payment options does The Good Earth Garden Center provide

Does The Good Earth Garden Center offer a senior discount?

No, The Good Earth Garden Center does not offer a senior discount.

Are warranties offered by The Good Earth Garden Center?

No, The Good Earth Garden Center does not offer warranties.

What services does The Good Earth Garden Center offer?