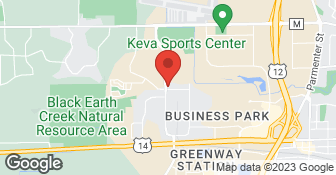 Welcome to Alonso Landscape Service, a full-service landscape company with one goal - making our customers happy. Our professionalism, dedication to quality and outstanding commitment to customer satisfaction has catapulted us to the forefront of landscape service providers in Dane County. At Alonso Landscape Service, landscaping is more than a job. It's an opportunity to create beauty and satisfaction for our customers. We ensure that our customers receive the time, attention and expertise each job needs for ultimate, timely, cost-effective results. From hardscaping to seasonal plantings, lawn maintenance to snow plowing, we view every job as our only job... until it is completed. We Are Fully Insured! For appointments, please call (608) 239-4577. ...

Alonso Landscaping was the only company to respond promptly to my inquiry. Their quote was reasonable and I chose them to replace a deteriorating retaining wall. They showed up when promised and the job took two days. I was very impressed with the employee they sent over, Armando. He was considerate, a very hard worker and explained everything about what he was doing. He was thorough and the wall looks amazing. I would not hesitate to recommend them to you. If the owner reads this, Armando worked his butt off to make it look good. I will definitely use this company again!

Description of Work
I needed a retaining wall that had collapsed in two areas replaced. The wood had rotted out and dirt was starting to appear on my driveway.

Alonso Landscape Service did a fantastic job of removing the 5 stumps from our yard. They handled contacting Diggers Hotline. They used a low-impact stump grinder that left no visible signs of its presence on the lawn after the job was done. They removed all of the debris and filled in the holes with fresh, smoothly graded top soil. They charged what we considered a very reasonable fee for the project. I would definitely hire them again in the future.

Description of Work
Remove 5 stumps from our yard.

Business must be booming because I've contacted them multiple times for this quote. Came to the house, no quote after a week. It's been 3 going on 4 weeks?! Why? I was paying in cash, no hassle with loans etc. Simple work, nothing extravagant. They just don't seem to care.

Description of Work
Going on 4 weeks without a quote?

[Member Name Removed], Edit: I did look up our conversation and remember you telling me personally that you did not want the quote anymore because you were going with another company. This is why we did not reach out anymore. Please reach out again if you change your mind. Jen
5.0

I HIGHLY recommend Alsonso Landscape Service. I received 4 quotes from area landscapers prior to selecting Alonso. Of the 4 they were the only ones to get my quote back to me within 24 hours and it was by far the most detailed. Even offering suggestions that I hadn't thought of to maximize my space. I couldn't be happier with the way the project turned out. Prices were fair and the team was very friendly.

Great job by the team! They showed up when they said they would and were easy to work with.

Fantastic! Alonso Landscape exceeded my expectations. I needed a huge tree removed from the front yard, tree roots removed, stump removed and the old, patchy lawn removed and replaced with sod. The team worked diligently and, more importantly, safely. The new lawn looks amazing - neighbors have commented about how good it looks. I will be a repeat customer when the time comes for the backyard to be spruced up! For the amount of work they did and for how impeccably well they did it, the cost of the project was low. I highly recommend this team.

Excellent timeliness and cost. Reached out to 3-5 landscapers on Angie's List for a minor hardscaping job in my back yard. Ramon from Alonso landscaping was able to come out and provide an estimate on site with a very quick start date (2-3 months sooner than other landscapers). The estimate was also very competitive (on average, 50% lower than other quotes). Work was completed extremely quickly (~1 day) and I am very pleased with the end-result.

The job went exceedingly well and was completed in five days. Previous installer was still not finished after nine months! Very glad I switched.

Description of Work
Needed improperly installed pavers (by a different company) to be removed, new gravel installed, pavers reinstalled, cleaned and sealed, and the entire yard regraded to keep water and ice off the driveway in the winter.

Good news: Ramon was very pleasant and accommodating. We set a contract in the fall for spring work. The workers were exceptional - spent about 9-10 hours at my house to complete the job (it was a lot of heavy work involving small vehicles and a lot of muscle!) in one day. Not-so-good news: I never received an updated contract - only an adjusted estimate. After reminders in fall and spring, it was never produced. I got a text out of the blue in late March stating they were planting on April 4. I wondered if it should wait until May, after potential of frost. (There was one in late April.) I asked if he had written down our notes from September so the workers would know what areas needed extra attention, and which to avoid. His only reply was to give another date. Unfortunately, two dates were rained out in May, so I finally received the work in early June - not a problem. Afterward, I asked how often to water, what happened if the seeds didn't grow (no contract!) and when to mow. He told me when to water and mow, and assured me the seeding would be fine. Then he told me I'd need to have weed control in the fall and gave me the name of a company. I was confused, I thought his company did that, and we would continue to work together. I contacted him twice in July to see if he could just stop by and take a look at the grass. No response. I get the feeling that I, or the job, made the project stressful for him. But I don't know! My yard is 3/4 nice grass, but there are huge clumps of quack grass and a strange plant throughout that I've never seen before. I don't know if this is normal. In my last phone message, I let him know that I did not want to give a mediocre grade on AL, but it's been 2 weeks and no response. I want to support local businesses and I try to be a good customer and I'm disappointed. I may edit this later if he does follow up.

Description of Work
Total replacement of 5,000 sqft lawn, clean up old garden (remove bricks and pavers). The lawn was overgrown with daisies, oregano, and ivy from a previous tree removal.

Ramon and his team are masters of their craft. We used them to grade and seed our entire yard after construction. They pay attention to the details that matter, they’re efficient, and they do a great job cleaning up after they are done. We could not be happier with Alonso Landscape Service LLC! Thank you!!

Description of Work
Best in town!

Alonso Landscape Service was created in 2004 with the goal of bringing a new level of professionalism and value to the landscape design/build market. Our Mission is to provide quality professional service in lawn maintenance and landscaping and snow removal to the private and commercial sectors of the Dane County. Our Key Principles Are: • We live up to our promises • We listen to our customers • We provide a quality product at a reasonable price