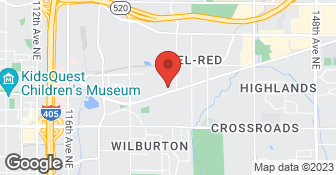 Zach from Eastside awnings was very helpful, we exchanged emails first regarding the windows we needed covering for and got a ballpark quote. He then came to our house and we got to see the product and discuss more details with him. In the end we decided to go with another product that we think might work better for our windows but really appreciate the prompt, clear communications & professionalism with Eastside Awnings.

Description of Work
We had exterior wind screens made for our outdoor area. Roll down shades were made to block 90% of the wind. Tony helped us choose the correct option for our patio. We'd originally considered sunbrella curtains but after viewing the options chose a much sleeker, less expensive option. We'll use them exclusively! Impeccable work.

Eastside Tent & Awning custom made a cover for our new bbq, as part of the outdoor kitchen project. Dave was prompt, courteous, and helped us select just the right choice of material and color. The work was done promptly and was exactly what we wanted. We decided that it would be nice to have some weights made to hold down the cover so it wouldn't blow away. Dave said he could do that with the remaining material. We went away for the weekend, and when we came home we discovered that Dave had brought and installed them. He went the extra mile for us. We would definitely use Eastside Tent & Awning again, and would most definitely recommend them. Prompt, professional service at a very reasonable price. An excellent choice!

Description of Work
Made a custom cover for our new bbq, as part of an outdoor kitchen project.

Once I made the decision to go with the cheaper option it was impossible to get them on the book. would not return my calls after the bid. Sent them an email after I saw they were installing shades at my neighbor and replied they were 2 weeks out for repair and would call when someone was in my vicinity (Bellevue!). Never heard from them again of course. What a poor experience and a waste of time.

Description of Work
The bid was either installing new solar shades (up to 15K) and/or fix what was existing (~2K). I went with only fixing the existing shades and postpone the addition of new ones to the following year.

[removed member name], We don't have a record of a boat cover in 2013 for you . If it is for another time or name please let us know. You don't mention why you were dissatisfied, but we would like to find out why and how we can make it better. Please get in touch so we can fix what ever the problem is. Thanks, Dave Monsaas Eastside Tent & Awning 425-454-7766
2.0

Description of Work
A contract was signed. After several delivery dates were missed the contractor told me they could not proceed with the installation. He noted that supplies for the awning were coming from Germany but never made it. All of my deposit was refunded.

Very professional and the installation was quick. He kept us informed and stayed true to the expectations he gave us.

Excellent workmanship and installation. I couldn't ask for better service or nicer people. The new awnings are beautiful

Excellent service. Wish they were located closer since the drive time to our house was the biggest contributor to the cost but we would use them again.

Great customer service. He was prompt and courteous. Suggested products that thought would work well. Never pushed or tried to up-sell. In fact, an additional repair was needed and he is currently working to find low cost replacement parts for a approximately 18 year old system, rather than trying to sell us a new unit.

The non-retractable Sunbrella awning at the entrance to my house was more than 11 years old, mildewed and falling apart. As the awning had originally been purchased from Eastside Tent & Awning in Bellevue, I called the company and asked whether someone could come to my house and give me an estimate of the cost of replacing it with another Sunbrella awning. I was able to arrange an appointment within a day or two. An owner of Eastside, Tony Monsaas, inspected the awning and measured it. He brought a large book of sample patterns with him and gave me some excellent advice about what to look for in an awning. I asked for and received a cost estimate (including sales tax). He itemized the cost of materials, stitching, and installation. He also promised to obtain swatches of the patterns I was interested in so that I could take them home and spend some time looking at them before I made a final decision. It was all very low key . The day after his visit, I called Tony and asked how much it might cost to have my old awning cleaned and restored. He gave me the name of a company that cleans awnings and told me what he thought it might cost , but he also advised me that given the condition and age of the awning, it might not survive the treatment. I contacted Sunwest, the company he recommended, and they sent someone out to look at the awning and give an estimate of the cost of cleaning and repairing it. I decided that it was more cost-effective in the long run to purchase a new awning. Within a short period of time, the old awning was gone and I had a brand new awning in its place. It looks great. Things couldn't have gone more smoothly.

Description of Work
Examined the condition of the awning overhanging the entrance to my house. Provided book of sample patterns to choose from and provided estimate of cost of replacing the awning. Ordered the material , prepared new awning, removed old awning and installed new awning. Advised on proper care and cleaning of awning.

With over 24 years of experience providing retractable awnings, exterior shades and roll shutters Seattle Shade and Awning is your clear choice for outdoor living products. We will provide you with the right product for your specific needs. All our installations are done with our own professional installers, never any subcontractors.  …

Seattle Awnings features both Retractable and Stationary Awnings across the Western Washington area. We focus on motorized Awnings and Outdoor Solar Shading Systems. Seattle Awnings does offer non motorized options as well. If you are a home owner or business owner who is looking to create more outdoor space Seattle Awnings would appreciate the opportunity to earn your business. Restaurants, Golf Courses, Wedding Venues and Home Owners who like to entertain your own family as well as friends and neighbors, Seattle Awnings is ready to help!  …

Washington Energy Services has been helping homeowners throughout Western Washington save money and live more comfortably since 1957. As one of the largest home improvement companies in the Seattle-Tacoma area, we are able to provide you with top quality products and services, installed by our professional craftsmen. Our free in-home estimates ensure you get the right product for your home. We'll be with you through all aspects of your project-from the purchase decision, expert installation, quality maintenance and service and even warranty work should you need it. We assist with permits and rebates, too. Give Washington Energy Services a call today to learn more or to schedule your service.  …

Bonded
Insured
All statements concerning insurance, licenses, and bonds are informational only, and are self-reported. Since insurance, licenses and bonds can expire and can be cancelled, homeowners should always check such information for themselves.To find more licensing information for your state, visit our Find Licensing Requirements page.
General Information
Free Estimates
Ask for Details
Eco-Friendly Accreditations
No
Payment Options
MasterCard, American Express, Check, Visa, PayPal
Senior Discount
No
Warranties
Yes

Eastside Tent & Awning is currently rated 4.5 overall out of 5.

No, Eastside Tent & Awning does not offer eco-friendly accreditations.

No, Eastside Tent & Awning does not offer a senior discount.

Are there any services Eastside Tent & Awning does not offer?