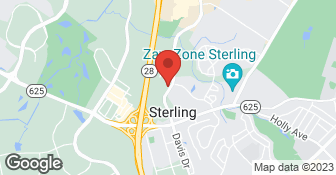 Mclean home improvement, LLC started with one man and a truck in mid 90's. Over the past 15 years we have grown to a mid-size, well respected class b general contracting company. We believe in customer satisfaction and that is our top priority. "we are not satisfied unless or until you are satisfied". Mhi does it all for you so you can rely on us for any construction or renovation needs of your home. No job is too small for us. We make sure that we turn your dreams into reality. The personal integrity and open communication philosophy established by owner and founder Lester Garcia ensures that same spirit is carried throughout each project by meeting deadlines, honoring all commitments and consistently meeting and exceeding the expectations of the client. This ensures a strong and confident relationship between contractor and client. We do provide competitive rate and our professional guarantee "to do it right". Additional email - mhi3042@gmail.com. Award winning....

The laundry room was the last unfinished room in my house. Lester Garcia was the only contractor who came for an estimate that seemed to really care about my project and put in the time to give me an accurate estimate. The other 4 companies seemed to just gloss over what we wanted and give a ballpark estimate. We felt that Lester really listened and gave us an accurate fair quote. The last thing anyone would want would be to be surprised as to the final bill! His workers were hard working and very professional and went out of their way to ensure that we were satisfied. My biggest complaint was that we were never sure if they were going to show up on what day. They would say the "electrician" or another worker would stop by on Tuesday and then wouldn't show up until Wednesday. This happened on several occasions. I would recommend that the company could communicate better with their customers. A phone call in the morning or the night before would go along way to set expectations. However they did quality work and we are very pleased with the room!

First let me say that MHI is a very large company in the area, and they have different crews, so your mileage will vary. The crew that I had was very professional and super-quiet, which was good. However, I happened to have another contractor working in the house at the same time, for painting and some other handyman work. We split the work between the two contractors, for cost and timing reasons. What I noticed was that the other contractor was much more consultative (helping us make decisions and choices along the way), whereas MHI basically just did whatever we told them. The other contractor had the foreman for the crew come by twice a day to inspect the work, and make sure we were happy, where as MHI's foreman came by on sporadically. If I hadn't had another contractor at my home to compare MHI to, I would have been OK with the work that they did, but not "Happy." MHI just did the basics and in some areas they did just enough to get by from a quality perspective. I ended up having (paying for) the other contractor come back and redo some of the work that MHI did, because the other contractor CORRECTLY pointed out how we could have had a better quality job in certain respects. When they showed me the difference (on their own dime), I was happy to then pay them for the work that they did. I've since given the other contractor another $20k+ in project work at my primary home and a different home that we are about to put on the market. MHI is OK, and they will do an "OK" job. So, although I would not use them again haven found another/better option, they will do what you tell them/pay them to do without failure.

Description of Work
I had a second floor bedroom converted to a laundry room, and some odds and ends work done (e.g., steps replaced, doors replaced, etc.)

The project took approximately three weeks and looks better than it did new. MHI is a hard working, well organized team and is great to work with.

Description of Work
Removal and replacement of perimeter border and interior brick driveway pavers. Slate flagstone repairs were performed on the rear patio.

Mr Garcia called me today to ask where I wanted the stairs as he was standing at the back of my house. I answered his question and then said thank you. He then asked if I had a plat of my home. To which I said yes I did, but did he need it to give me a quote. He said no, and I answered that once I decided on a contractor, I would then provide the plat as I had one from my home settlement the year before. Mr Garcia then asks me how many contractors I was having come by. I thought that was weird and asked him what did that matter? He then went on to explain that if it was a large number that he didnt want to give me a quote as it was a waste of time as I was just seeing the cheapest bid and not quality. I was taken aback by this response. I told him that I was offended that he made an assumption about me without even knowing me. I then explained that I would be going to Angies List and give him a rating to let others know how he does business. I explained I went to angies list, found 10 contractors with A ratings and called them. At the time of this call, I had 5 companies say they would come out for a quote. I then said it was up to him if he still wanted to give me a quote, but however I didnt think it would work out as the phone call left me with such negativity already. I can give him that at least he was honest. But I just could not believe that someone that wants MY business would have that opinion. I didnt find it very professional. I am not a person that writes many negative reviews. But this one left me quite annoyed.

Description of Work
I called McLean Home Improvement LLC to come out to my single family home to give me a quote to build a 12x12 composite deck with 3-4 stairs extending down to the grass. When I called McLean Home Improvement LLC I explained what I wanted and they asked to set up a time to meet me. I explained that it was difficult for me to get off work in time to meet them. I asked that they come by at their convenience and to call me if they had any questions. The deck I was asking for was very simple and did not need much for explanation.

Great. Lester was great to work with and provided several good ideas about how to best reconfigure the basement, and accommodated changes along the way.

They were prompt and thorough at a very fair price.

Description of Work
I needed a leak fixed inside a wall as well as some drywall and painting repairs caused by the leak.

It went very well. We needed a wide range of things to be done. Gave a lot of thought to using a painting contractor for the paint work, electrical contractor for the electrical work, etc., etc. or just going with a single all-purpose company to do everything. We decided to go with McLean Home Improvement to do everything and are glad we did. Work was done in Fall 2014. We had no complaints or problems when the work was done and we still feel the same way. MCI owner Lester Garcia was on site frequently and kept everything moving. His foreman, Antonio, was tireless (as was the entire crew) and it became quickly evident that he could do whatever needed to be done. On their final day, Lester did a walk-thru and discovered a minor water leak downstairs. Even though they had largely packed everything up and the leak was not part of the project, they replaced the section of copper pipe and fixed the problem. It would have been easy and convenient for them to say they would be back at a later date but they took care of it right then and there. Don't know if many other companies would have done that.

Description of Work
Primarily interior painting throughout the entire upstairs including vaulted ceilings with a good deal of wall prep. Some plumbing. Electrical repairs and new installations. Assembled and installed 10'/8' shed purchased at Sam's Club. Granite countertops and new backsplash.

Lester did a great job of providing us with a reasonable quote and a complete list of all of the items that he would accomplish. They were on time, did a great job and selected quality products. I would definitely recommend them.

MHI's work was exceptional as always. The deck turned out better than we imagined. It transformed our backyard. This is the fourth home improvement project MHI has done for me. Owner Lester Garcia and his team do great quality work at a fair price. Lester always invests the time to ensure every project is done to standard. I am at the point where I don't even call anyone else for estimates.

We are a veteran owned business with over 25 years of experience. We specialize in lawn irrigation maintenance, as well as, outdoor low voltage lighting and holiday lighting. We provide service to all irrigation & lighting systems and offer a variety of service options.  …

Closet America is a privately owned and locally operated manufacturer and installer of custom home organization systems for closets, home offices, pantries, media centers, and garages. By raising the standards for quality and customer service, Closet America has steadily grown into one of the premier names in the professional organizing systems industry. We have been consistently awarded the prestigious GuildMaster Award for exceptional customer service and satisfaction.  …

At Spray Foam Insulation, we work for both commercial and residential clients. We are the true champions in closed and open-cell spray foam insulation. Our products can be used in various applications including walls, floors, attics, sound-room, wine rooms, storage containers, metal buildings, etc – so, yeah, virtually everywhere! Spray Foam Insulation has been working for years and making people who are looking for the best insulation services smile. From a humble beginning, we have now established ourselves as an industry leader in the spray insulation community. We have served both small home and mega builders. So, no matter the size of your project, we will handle it like pros!  …

McLean Home Improvement LLC is currently rated 4.9 overall out of 5.