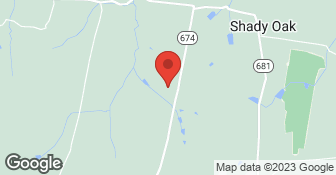 Green Hill Landscaping is a family owned and operated business serving the Northern Virginia area, Potomac and Bethesda, MD since 1998. We provide our customers with the convenience and reliability of working with one company for all their landscaping needs. Our goal is to ensure that your property and valuable investment is looking its best all year long. We strive to deliver superior quality work and service for the most efficient price. We have chosen to stay family owned to provide our customers with specialized quality care managed carefully by its owners....

They have reasonable price. They show on time and have a great service.

No response to request for service estimate. Poor communication.

We used Green Hill Landscaping for our leaf clean-up in 2017 (our first time contracting this work out) and were quite satisfied with their service. About twice each month, from October on, the service kept the property looking good at a reasonable price. When we got this year’s quote for the service, we were surprised by the 50% price increase and initially hesitated to engage them again. But, eventually, opting for the convenience, we provide the authorization on Oct. 9th. Then, nothing. We had other separately priced and contracted work for flower beds’ cleanup, weeding and mulching done on Oct 29th. Obviously, some leaves were moved in that work, but it was also priced separately from the leaf removal work. I called on Nov. 19th (6 weeks after authorization) to asked when the work would be done and was told it would be “in a few days.” A week later, on Nov 27th (7 weeks after authorization), I called again to complain and was told that I would be put on that day’s schedule. I said that would be fine as long as the price were corrected due to the failure to provide the service as advertised (i.e., in October removal from only the lawn area about every 2 weeks, in Nov/Dec removal from lawn, mulch beds and hard surfaces about every 2 weeks, weather pending). That request was rejected on the basis that it was still the same amount of leaves to be removed and that it would take the same effort. Also, the “weather” was claimed as a contributing factor. Having done this leaf removal myself with a work crew for years, I know that doing it once verses doing it multiple times does not involved the same amount of effort. And, while I realize we have had quite a bit of rain, it has mostly been in large deposits. According to the National Weather Service, between Oct 9th and Nov 26th (48 days), There were 5 days with accumulations over 1” and another 3 days with accumulations over ½”. The other 40 days had either no rain or trace amounts. Green Hill’s insistence that they be fully paid despite their failure to deliver the services advertised seem totally unreasonable and I cancelled the authorization to work. I can’t know the actual reasons for non-performance (staff shortages?) but I do know the explanations given don’t hold up under analysis.

The first few mowings were okay. Then they got sloppy and zigzagged around yard on mower. They were here only 11 minutes last visit. They charged $550 in advance for pulling weeds weekly. They did once an okay job. There was one area they never touched. After two weeks of no weed pulling I called. Always the same. Theyll come do it. They didnt. After 2 months of waiting and calling to try to get them to do right by us we fired them and asked that we get refund of at least half of the weeding money back. They said its too late. We were waiting on their empty promises. WORST CUSTOMER SERVICE. THEY DONT CARE ABOUT THEIR CLIENTS. THE WORKERS ARE LAZY!

Description of Work
Mowing and Weeding

Unsatisfied and would not use again! We had Green Hill come out of spring bed prep and mulching. Weeding is listed as part of the bed prep and our weeds were not pulled -they were week whacked - only to grow back in the next week. Also we were charged an add'l $600 (which we agreed to) for add'l "spring clean" to remove existing mulch and prep to be mulched with double shredded brown mulch. Well, we came to find a lot of the old mulch was just blown into the grass in our yard. When my husband reached out - they came out and agreed and said it would be taken care of, but no one came out and we had to rake it up ourselves, so we could mow the lawn. Would not use again nor recommend!

I would stay away from this company if you don't care about your landscape, and let them do whatever they want with it and when it's convenient for them.

Great. I've been a customer of their the past 4-5 years, and have always been happy. Their customer service is quick to respond and happy to accommodate our requests. Their prices were very competitive when I compared them to others in the area.

Great! My experience with Green Hill so far has been excellent.

Great. They continue to do a great job.

They do what they say they are going to do. They will bill me after they do the work, my experience with other folks I have to mail a check first. With this company you can go online to their site and pay electronically. They are cheaper and know the market price so they caught my attention. They are very professional when you call them they have someone who speaks English fluently.

Xterior Lighting is committed to excellence to every aspect of our business. We uphold a standard of integrity bound by fairness, honesty and personal responsibility. Our distinction is the quality of service we bring to our customer. Accurate knowledge of our trade, combined with ability, is what make us true professionals. Above all, we are watchful to our customers interests and make their concerns the basis of our business. With quality work, personable workforce and over 12 years of experience, we know we are the right one for you.  …

Green Hill Landscaping is currently rated 4 overall out of 5.

No, Green Hill Landscaping does not offer a senior discount.

No, Green Hill Landscaping does not offer warranties.