With Angi since November 2009 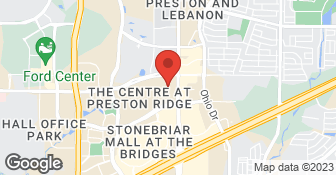 Inside & Out Roofing, Painting & Remodeling LLC

Inside and Out specializes in all your Roofing, Painting and Remodeling needs. We are fully Licensed and Insured for your protections and offer affordable monthly payment options for your convenience. ***FREE ROOFING INSPECTIONS*** **Insurance Claim Specials- Get credit toward upgrades and other services on all insurance claim projects.** Take advantage of our quick and friendly customers service and schedule an appointment for a free consultation today!  …

Hernandez Painting is a full service painting company located in Sanger, Texas. We are owner operated and we take pride in all of our work. We know your home is one of your most valuable investments and we're dedicated to bringing our customers’ homes back to their former glory. We want to make your neighbors jealous with the new look of your beautiful home! When you hire us, you're hiring a team of professionals who are trained and skilled to deliver lasting value to your home. Please call us or click for an estimate today  …

Everything went well. The gentleman was very professional and organized, and he provided an estimate on the spot.

Description of Work
He gave a quote for painting my dining room and staining my concrete patio.

THEY SUCK. HORRIBLE CUSTOMER SERVICE. WON'T ADMIT TO AN HONEST MISTAKE. I do have my worries about posting this because they still haven't painted out unit yet and could do a bad job by not preparing the metal, etc. correctly or putting on the proper coats. Does anyone know a good inspector? Hmmm, I bet Angie's List does. :-) I really am disappointed in Jesus Walls's attitude. It was a simple, honest mistake but he didn't own up. Telling me the excessive splatter came from something else was the final straw. According to his insinuation, on this sunny day, I would have to have bought the proper length hose and powerful sprayer, attached it to the spigot downstairs, thrown it up one story, stood on my own 2nd floor balcony, and, since I don't have a power washer, opened my door and wantonly splatter-sprayed into my own house. I have photos (that I don't know how to upload).

Description of Work
NOTE, the 5000.00 is a guestimate of the portion of the contract paid for by the HOA. It is a 3 story town house. 60 units. Fresh Coat was contracted to power wash and paint the trim and metal. Note- we have a plain door that is mostly window. To cut down on sun, we attached a removable blinds unit that we bought at a big box store. ----They were power washing the units to prepare for painting. This was on a sunny day. I watched them. They stood on the 4 1/2 foot deep balcony and sprayed the underside of the metal balcony one story up and directly around the patio window and door trim. Well, the spray came in from around the door and into the house!. I am sure it was an honest mistake. It splattered the velvet and leather sofa, my wooden antique table and the floor. The worker came inside and removed the now wet blinds attached to the door. The pressure washer sprayed the caulk off the door seal and wet the inside of the door window. Pancho was very helpful and he spoke good English. The owner, Jesus Walls, was a different story. Even before he came he said to me and my husband that he doubted his company was responsible but he didn't know how the water got in there on a sunny day. He refused to provide insurance information. He said he wanted to see the place and was about a 1.5 hours late. He showed up with two people. They only spoke Spanish to Pancho. They brought the power washer back but it is our understanding based on further research (two home contractors in different states), that they used a different nozzle during the 'test' because the water during the 'test' was more or less clear and sheeting onto the window, plus the guy spraying started by standing off to other side of the balcony !! The worker I saw spraying earlier that day had sprayed up one story to clean a metal structure. The water pattern was very precise, hissed loudly, and kind of whitish. Then, using the same nozzle, he stood a few feet from the door and windows and sprayed. So......we are all inside, and Jesus stood directly in front of the door in a very nice shirt. That struck me as odd. I even gave him a towel to protect his shirt andhe said he didn't need it. Without asking me, he was signaling the guy to spray. I yelled, "wait!", as he hadn't even bother to move the wooden table and sofa that were in front of the door where the mishap occurred initially. When I insisted on moving my furniture, I felt he acted annoyed. Jesus Walls finally agreed to pay for the cleaning "out of his own pocket". He refused to acknowledge the possibility that the velvet was ruined and would have to be re-upholstered. He had a poor customer service attitude at all times. He would not take ownership. Then he emailed my husband that he wanted three estimates for the cleaning. We said "No Way" because the velvet is extremely tricky to clean and the cleaner said time was of the essence. Parker Brothers Carpet Cleaning is THE BEST. see my review under Upholstery Cleaners. Parker Brothers came at 7:30 the next morning. Jesus said they were insured and bonded, but refused to provide the paperwork.

Painters showed up a little later than expected but the started right away. Replaced damaged wood and started caulking joints and windows. Second day they picked up the paint and started painting. I was assured that all exposed wood would be primed with an oil based primer and for the most part it was (see punch list). Finished most of the painting on the third day (Friday). They had trouble locating wood for a column that needed to be rebuilt so the final portion was put off until Monday. Saturday - I did a walk through. Unfortunately for Fresh Coat I am extremely picky when work is done. I proceeded to inspect the paint and wood work with an inspection mirror to see under areas I could not easily see. I even climbed on to the second story roof to inspect the chimney.The punch list was minor, only a few items including : 5 areas needed to be touched up as wood was not sealed on cut ends (needed the mirror to find these) mainly the vertical trim boards of the chimney. Exhaust risers for furnace and water heater were not painted. They said it was not in the quote, i argued that they were painted originally they should be considered as part of the job, the crew complied with little resistance. Underside of new window box was not painted exposing it to sprinkler system water. Garage door opening trim - they replaced the left side but did not match the right side. I had them match it. Monday, the crew returned with the column wood and rebuilt and painted the column. They addressed the punch list and completed the job. The lead (Armondo) did a great job. he asked if he could leave the old wood on the side of the house until Saturday as his truck was full. He did such a great job I agreed. Overall they did a great job. I must commend Fresh Coat for honoring an original quote from a branch in Plano that closed a wee prior. These guys did a great job and I will be happy to recommend them to anyone who is looking for a painter.

Description of Work
Painted exterior of house, trim and accents. Replaced damaged wood a including rebuilding a window box.