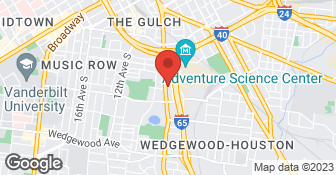 Great. Everyone that we commucated with was extremely nice. They were prompt, very efficient and knowledgeable. We feel like the quality of workmanship was excellent.

I sent a message through Angie’s List, as well as a phone call, and never received a reply. Maybe my job was too small?

[Member Name Removed] This is Bill the owner-I apologize that we have not responded. No job is too small- Please call my direct line at 615-254-8875 and I will set up the appointment
5.0

Randy was great. He measured, ordered and installed the mirrors . He was very professional, knowledgeable, and helpful. They cleaned the mirrors when done and they look great!

Description of Work
Mirrors made and installed.

Great! The tech was right on time, and the panes were replaced quickly. Very professional, and I'd definitely recommend Glass Doctor.

Description of Work
Cracked glass panes on a few windows at a rental property needed to be replaced.

Great! The guys were actually early and called to ask us if that was okay. They did a great job with installation and clean up.

Toby and John did a great job. Quick with no mess.

Dalton and Toby were great! They were very friendly and made sure I knew I could ask them any questions at any time. The job was done much more quickly than I expected. And the price was better than some of the other companies I checked. Making the appointment was easy and they came to my house! I will definitely use them again and recommend to anyone!

Overall, the entire process went very well. The Glass Doctor team came out to look at the broken window, developed an estimate, then ordered the replacement parts. The installation process went well, although we did experience a delay of several weeks due to a problem with the replacement glass. Once installed, the overall quality was excellent and we are very happy with the service provided. John did a great job!

Great experience. Vicki and Toby communicated with me timely. Arrived on time and called in advance.

Technician, Rusty, was on time, courteous, efficient and cleaned up after replacing shattered glass door. I would use them again when the need arises.

Description of Work
Replaced shattered glass on back door.

They needed scaffolding and brought I think 4 men for the job. Arrived on time planned and did the work. Cleaned up. They were professional and personable.

Description of Work
One large trapazoid window replaced, plus one small one over front door and glass inset in door replaced.

It went very well. They came to our home, measured the items to be covered with the glass, and within in a reasonable time, delivered the glass, making sure it fit properly and that we were satisfied.

.Their service was excellent. They completed their work on time. However, I'll never use their services in the future.

Description of Work
.The Glass Doctor of Nashville replaced the front wind shield.

Just awesome all the way around.

As ratings show all went well.

Excellent communication and customer service from company. Very pleased and would use them again if the need arises.

Description of Work
Replaced a broken window pane in bedroom

They were prompt and courteous. I use them all the time

He arrived five minutes early, made a very good repair using his truck as a shop, cutting and grinding the glass to an exact fit after removing the broken portion. The repair took less than one hour and looks wonderful. The repairman was most helpful, and very polite, considerate and mindful of the plants in front of the windows. He also cleaned the area until no trace of any repair remained.

Description of Work
One of the only glass repair professionals that still repair house windows! Had a cracked pane in my 3 window spread of our front living room from a child's soccer ball. Tried many glass repair firms, finding no one wanted to do a repair on a lone window. Glass Doctor had no problem doing the small job, and scheduled a repair for two days away, with a name and time of arrival of the repairman. The estimated cost was reasonable - much less hassle and expense than replacing the entire window spread.

Terrific. Was on time, professional, and cost effective. Would highly recommend and we will use again if need be.

I contacted Glass Doctor and an answering service set up an appointment for someone to come out and look at my door. The next day, someone from the store called and asked a few questions. Said they couldn't get the kind of glass i wanted, so I asked about a different kind. She said she would get back to me with an approximate price and never did. I called two days later and left a message on her machine which was never returned. I tried calling again the day before the appointment to make sure someone was still coming out to look at the glass. I was unable to get hold of anyone and did not leave a message. To my knowledge, no one came out and looked at the door. I have not received a phone call about a price or anything. Very unprofessional. If they didn't want to come and do an estimate I would have appreciated a phone call to let me know that.

Description of Work
Did not do work

We bought our house this Spring, and as part of the sale, we had the previous homeowners replace a bunch of windows that were fogged due to broken seals (by another company...not Glass Doctors). One of these windows was a large picture window above our front door, and there was a black handprint on the wall (about 16' up), several large black scrapes on the wall, and one handprint on one of the top panes in the window. I assume that these were all left from the installation, but I don't have a ladder that big to clean up after them. During a big storm (the day we moved in) that window leaked...a lot. We called that company (a couple of times), and they finally said they'd come out at THEIR convenience to try and reseal it. About a month later, it leaked again...even more so than the first time. We called, and after not having our voicemail returned, we decided to just go with another company and pay to have the job done right. Glass Doctors came highly recommended on this site, and the scheduler was courteous and patient. The man who came out to take a look at the problem was prompt, friendly and informative. We got a sensible quote, and when the crew came out to do the repair the next week, they were prompt, professional and friendly. They even cleaned the other handprint of the window pane! They guarantee their work, so I would have not reservations about calling them again.

They were very good and very professional.

Description of Work
He gave me a quote to replace a kitchen window.

They confirmed the appointment, arrived on time and provided the estimate. Called back when replacement glass was ready for installation, again installation professionally handled. Pleasantly surprised when they indicated that there was a 20 year warranty on the window.

Came promptly when called (unlike most others I contacted), measured, and returned an estimate within 24 hours (unlike any others I called); when the window arrived, the installers were courteous, considerate, and professional--the job was not an easy one by any stretch of the imagination--required workers on ladders both inside and outside the house; the window was extremely heavy and the room was small to work in. They were great. The owner came out to personally inspect the installation. The price was reasonable and there were no problems at all.

Looking for replacement windows, roofing, siding, doors, or attic insulation? As the nation’s largest full-service exterior home remodeler, we offer high-performance products and professional installations and a lifetime warranty. With 900+ lifetime Angi Super Service awards in our over 30 years business, we are committed to understanding your goals so we can transform the vision you have for your home into reality. For a free, no-obligation estimate, contact us today!  …

We are a local family owned window and door replacement company, servicing all of middle Tenessee. We do exceptional work, please go to our Google My Business Page and read our reviews https://bit.ly/2UoqrSB No Pushy Salesman in your home. No down payment. Lifetime warranty including glass breakage and labor, NOT a Limited warranty for Life. No pressure. No fake price drops or gimmicks. We offer ease of process while providing superior value all on your terms. Double Hungs, Casements, Sliders, Awning, Bays, Bows, Garden, Patio Doors and Entry doors Please call us today with your questions at (615) 424-8102  …

Durante locally serves customers throughout BIRMINGHAM, HUNTSVILLE, and NASHVILLE metro areas. We are not a chain or a franchise-we're local and we are one of the most trusted names in the home improvement industry! Durante offers outrageously GREAT Customer Service, and when you call our offices you will always speak to a LIVE person who is friendly and ready to serve you! At Durante Home Exteriors, we want to help you, we want to spoil you and we want to make your home look its best! That‘s what you should expect from Durante Home Exteriors. We have hundreds upon hundreds of satisfied customers that turned to Durante for their Home Improvement needs and we have the pictures and testimonials to prove it! If you want a company that’s 100% focused on YOU call US!!  …

How is Glass Doctor of Nashville overall rated?

Glass Doctor of Nashville is currently rated 4.9 overall out of 5.

What days are Glass Doctor of Nashville open?

Glass Doctor of Nashville is open:

What payment options does Glass Doctor of Nashville provide

Does Glass Doctor of Nashville offer a senior discount?

Are warranties offered by Glass Doctor of Nashville?

What services does Glass Doctor of Nashville offer?

Are there any services Glass Doctor of Nashville does not offer?