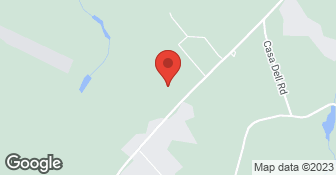 Description of Work
Outstanding job painting the interior of our home. Very professional. showed up each day on time and worked hard throughout the day. Were also very quiet while working.

When we had our entire remodel done, they did our painting, and plastering. The service was excellent. I would recommend them.

Description of Work
We hired Divine Touch Painting to do our painting.

The timeframe was going to be tight and one of the reasons for hiring this company was that Gerardo said he could bring in an entire crew to do the work and therefore get it done in our timeframe. Others I talked to were single practitioners and would take longer to complete the task. We wanted the work done before we had to move into the house. Although the house was empty, we discussed that all floors needed to be protected, light fixtures taken down or otherwise protected, etc. The work was begun on time and the first day there was a full crew working. However on subsequent days, only 1-2 people were working, so work was not progressing as it needed to. Then, perhaps to catch up, two guys showed up on Saturday and brought a power sprayer to spray the ceilings. Paint went everywhere and where floors were not protected adequately, paint got on the hardwoods and marble tile, as well as overspray everywhere. We called the owner and said no more spraying, it needs to be rolled as we had expected. Work continued to progress very slowly as people were divided between other jobs and ours leaving only 1-2 people working in our house until two days before they were supposed to be finished. Only then did the full crew show up, but it was too late to catch up fully. As a result, work got sloppy - they painted over speaker covers erratically - one painted and one partially painted in the same room. Around the ceiling edges, it was never smoothed and caulked so there is a jagged edge. One can light was lost and never replaced. The tape pulled paint off the moldings leaving bare wood exposed in many places and not touched up. Any time we expressed our concern to Gerardo he simply assured us it would be done perfectly and done on time. On the and quot;last dayand quot; he asked for full payment of the remainder and we paid him. He said he would be back with two new speaker covers to replace the botched up partially painted over ones and a new can light. Since then he has never returned our calls or emails and we have never heard or seen him again. Overall they did a decent job on a tough project, but they did not adequately protect our home or manage their time appropriately and they did not follow through on commitments.

Description of Work
We hired Divine Touch to smooth and paint the ceilings in our new home (remove popcorn) and repaint virtually all interior rooms walls.