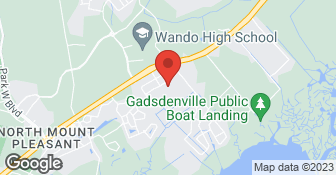 For over 22 years, from the Upstate to the Lowcountry of South Carolina, customers have relied and trusted Edgewater Construction Inc. to turn their dreams into reality. Whether your project is a custom home or to remodel an existing home we will accomplish your unique construction needs

Excellent. Above ans beyond expectations.

This contractor was extremely professional, polite, helpful, and clearly knew the best way to repair our home. He definitely knows construction and is a perfectionist in his work. The pricing was a little higher than others we've had work on our home, but I would never hesitate to ask him to do work on our home again as I know it would be done right and in a professional manner.

Description of Work
We had rotting trim and some boards under our vinyl siding around the chimney replaced.

Pat came out to give me an estimate for a great deal of work that needed to be done on a house I had just bought. He has been on time every time he said he would be here, began a day early and took two fewer days to complete the job than he had originally estimated. His estimate was thorough, and every call I made to him was answered immediately. He came the evening the lumber and other supplies were delivered to check on everything and even dragged my garbage can over the stacks of lumber to take it to the curb for me. As he was neatly covering the lumber with waterproof sheathing, I left to go to the grocery store. When I came back, I found he had moved this huge pile of lumber and made a path around it so I could get my groceries into the house without stepping on the pile (I had asked the lumber delivery person to place the stack as far up on the driveway as he could to be sure we could still fit the dumpster, port-o-let and my car in the driveway, and he took me at my word). Pat included a dumpster and port-o-let in his estimate (which I appreciated) and made sure those were delivered on time right before the job. I have nothing but excellent things to say about his expertise in coordinating the job and his determination to make sure it was done right. He quoted and used whole boards of siding (most of the other 8 contractors that bid the job were going to cut and paste). Carlos (the head crew person) and Pat's other workers were incredibly professional, courteous, worked non-stop and did a wonderful job. They worked until after dark one night to be sure the house was protected by sheathing over the plywood before they left. They arrived promptly at 8 a.m. each day and left well after 5 every night. When the weekend came, they made sure the entire site was swept clean and all of the pots of flowers were put back where they had been originally. On the last day, Pat came with his son to replace the shed door and was unbelievably courteous as I ticked off my list of questions and even asked for a few additional small items to be done (he took a very heavy roll of tar paper out of the eaves of my shed to throw it away. It had come with the house and I had always wanted it gone but had never been able to lift it). I went into this project apprehensively after hearing horror stories about contractors and getting estimates from several that just did not seem honest. I had one drop out and never take my calls again after I asked to see his license and proof of insurance (even though he had said he WAS licensed and insured). I did do a lot of research and met a lot of contractors before making a decision, but even so I was nervous. I know now that when I have other projects to do on this house in years to come, Edge Water will be my first call.

Description of Work
Edge Water replaced rotted siding, as well as the board and sheathing under the siding and the insulation beyond that for two-thirds of a side of my house. They also replaced siding on the shed, repaired three rotted window sills and constructed a perfect fascia on the shed where there had not been one (now it looks like a very sturdy real building). In addition, a shed door was replaced, new flashing was installed on the chimney and over the entry roof, new outside light fixtures and a doorbell cover were installed and some missing roof shingles were replaced.

At Duramax Construction, we pride ourselves on providing a wide range of services for our customers. We have the experience, skills and equipment necessary to tackle smaller projects as well as larger, more involved ones. We can coordinate with other contractors or perform every aspect of your project with members of our crew. It's this comprehensive service that sets us apart and satisfies our many clients. From small remodeling projects to major renovations, we do the job with quality and customer satisfaction in mind. We work all over the South Carolina Lowcountry.  …

Family owned and operated business with over 14 years of experience in masonry and working with stone. We will make sure your dream project is completed with efficiency and professionalism, Call for you Free Estimate Today !!  …

Edgewater Construction Inc. is currently rated 5 overall out of 5.

No, Edgewater Construction Inc. does not offer eco-friendly accreditations.