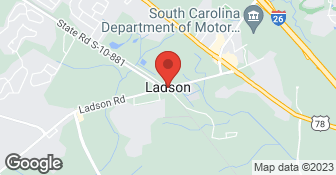 LowCountry Termite & Pest Control is a locally owned and operated, Christian based company, servicing the Greater Charleston area on ALL pest control and termite services. We our Licensed, Insured, and Completely capable of resolving all your Lowcountry bug problems. We treat every home as if it was ours and every customer as if they were family. Every Customer, Every time!...

Drew and his team were extremely responsive and professional. Were very knowledgeable and handled the project very well from start to finish. Would definitely hire again!

The service was quick. Along with spraying inside and outside my house, the technician treated all wasp nests and knocked them down. He also knocked down spider webs and put down sticky traps to catch skinks in my garage.

Description of Work
I needed my house and surrounding areas exterminated for wasps, spiders, and skinks.

My experience with them was friendly customer service.

Description of Work
They treated termite and pest control.

Brandon arrived at my home promptly at 2 as that was the time we agreed upon the day before. He was very efficient, informative, and oh so personable. So much so that we will be using him for a quarterly maintenance program.

Description of Work
Needed to check for insect infestation and to spray for bugs that had been seen around the house.

I'm not going to write a book but greatest service I have come across, professional, timely, trustworthy, all you can ask for in a contractor. Hired him for quarterly service with no worries whatsoever.

Description of Work
Check for infestation and complete spray, inside and out.

Gave Mr. Ahrens the green light to do the rodent proofing of crawl space. He said ok I will be there Tuesday 8/5/2014. Calls back same day to tell me he wont have the materials til Thursday but he cant start til the following Tuesday b/c he's going out of town or something. Ask for money upfront to pay for materials. Said he's been screwed a few times here lately. Well, I'll played that game before and almost always come out a loser when i give these guys money upfront. But I agreed. He calls me Monday 8/11/2014 to confirm work. I said yes we are on---do your thing!. He calls me next day saying the ground is too mushy under the house----what?????(it's sandy soil---we live in Charleston, SC) He said he would rather do job on Saturday when I'm home so i could inspect and he could get paid the same day.---which is really what he wanted! (I had told him earlier I needed to see work under house before I would pay him----told him it would probably be Saturday before I was able to inspect his work since i do work mon-fri. He said no problem) Basically, he wasn't going to do work unless he was able to get paid immediately. I explained to Mr. Ahrens since he was young and new in business most people hire you so they don't have to be tied up with construction at their home over the weekend. I don't think he understood that part. Well, then he continues to tell me that he prayed about it and doesn't have a good feeling about doing the job until Saturday when i'm there so he can get paid. At that point, i was done. I didn't have a problem with him praying about it; just the fact he insulted me basically by insinuating i was going to screw him over. If he's worried that much over 385.00(after the 200.00 i was giving him up front) how could this guy "EVER EVER EVER" pay for a repair on a termite claim???

Description of Work
Quested a quote for rodent proofing my crawl space and quote on termite bond.

Any and all termite repair claims are filed through my business' insurance, so there should be no worry there. I apologize that you felt insulted, that was never my intentions. As a small local business, our policy is payment upon completion of work and if there happens to be any issues we come back out a fix things. As we were unable to come to an agreement with scheduling our services and payment, we wish you the best with getting your home rodent proofed with your specific requests and schedule.
5.0

Service is great. I would highly recommend this company.

Walker Pest Management is a local, family, owned pest control company that offers a full range of services. These include residential & commercial pest prevention plans as well as one-time pest solutions. While our competitors have large initials and startup fees, we try to keep the cost of getting started affordable for everyone. Whether you have a problem with ants, spiders, earwigs, silverfish, centipedes, mice, rats, bed bugs, termites, or even stinging insects like yellow jackets, wasps, hornets, and fire ants we have a solution. Our customer service representatives are ready to help asses your pest issue and provide you with a timely appointment that works with your schedule. You will be given an actual time of arrival not a 4 hour window to wait for someone to arrive. We look forward to working with you and keeping your home or business pest-free.  …

LowCountry Termite & Pest Control handles all pest control issues. Whether you are dealing with ANTS to TERMITES or ROACHES to FLEAS and ALL IN BETWEEN, we can rid your home of any pest. Our services are 2nd to none with prices that are hardly ever beaten. Quarterly services start at $50 and Termite estimates are always free.

LowCountry Termite & Pest Control is currently rated 4.9 overall out of 5.

No, LowCountry Termite & Pest Control does not offer a senior discount.

LowCountry Termite & Pest Control offers the following services: LowCountry Termite & Pest Control handles all pest control issues. Whether you are dealing with ANTS to TERMITES or ROACHES to FLEAS and ALL IN BETWEEN, we can rid your home of any pest. Our services are 2nd to none with prices that are hardly ever beaten. Quarterly services start at $50 and Termite estimates are always free.