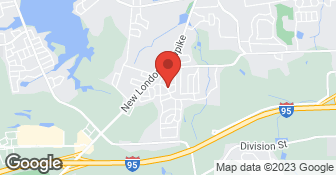 I received 3 different quotes and Pro X was the best.Mike said 8-10 days ,but the crew finished in6 1/2 days.The crew worked very well together. the windows and doors where done first ,then the siding crew and finally the gutters,downspouts with leaf guards. If you have a question,Mike gets back to you within minutes,and sent e mails with any updates.My house looks awesome!

Unprofessional service- dragged out a start date and lied about pulling permits.

Description of Work
Siding for home

We never had the opportunity to do this job so this review is very unfair. I communicated with this customer frequently and let her know that my supplier was shut down for two months during the Covid pandemic she didn’t believe me. She also called me a liar and said I did not pull the permit when I did I even sent her a copy of it in her email . She called the building inspectors office to see if I pull the permit and talked to a counter clerk who didn’t know what they were talking about. The fact is I had the permit and I was ready to do the work in seven days. Giving me an F is very unfair and calling me a liar when I’m not is illegal and there will be a defamation suit coming soon
5.0

Amazing work. Great attention to detail and The owner is a great, professional guy. No one could beat his price and the quality didn’t suffer. He even made recommendations that cost a little more but didn’t charge me more.

This company did an amazing job with our vinyl siding project. The team was always well prepared and they communicated with us every step of the way. The crew was very respectful and neat which meant a lot to us. Our home looks beautiful and the grade of A is not enough, I would go higher if I could. I highly recommend this company and have! Thank you so much, Pro Exteriors! Kristin and Al

Description of Work
vinyl siding and some carpentry repairs

Very well. Professional, clean and respectful workers. I have already recommended them to a coworker.

Excellent job by this company. The quoted job was performed in a timely manner. The installers showed up on time and dismantled old frames and installed new with little clean up. I would highly recommend this company if you are looking for quality product and installation.

Pro Exteriors came over 1/2 hour of my call. I met Mike who was very knowledgeable and informative in every aspect of his work. At the end of that day, he sent Bob to repair my damage who did a great job. I would strongly recommend Pro Exteriors to anyone who wants a job very well done. Kudos to Pro Exteriors.

Great work and great crew! Pro Exteriors is an excellent company, with great prices and great work product! I will be hiring them again for any future work!

It went very week. Work was done efficiently and worker cleaned up when he was done

Good company. The owner was fair, honest and easy to work with.

Mike gave me a quote for windows. He was nice and professional enough. I was replacing 15 windows and a bow. I asked him to price the bow separately as I was not sure if I would do that one. I have crank-outs and he initally didn't feel "comfortable" giving a quote to install double hungs without having his carpenter measure the windows (I assumed Mike is more of the siding guy, so this honesty did not bother me). His carpenter came out and measured. Mike gave me a good price for Harvey Classic double hungs, but on par with other companies using similar products. I had some concern when he did not know what glazing options were included (Harvey offers 3 for the classic), but I had him price out Harvey Tributes and he gave me a good price. Harvey could not fabricate a 5 pane bow window to replace what I have, so I asked Mike if he could try another company for that; he refused. So I decided to hire him for just the double hungs. That would have still been a 10k job, but he then tells me in an email he can't do the job because he had given me a competitive price that he now decided didn't give him a big enough profit margin to make it worth while. Felt like a bait and switch tactic, and I could only be concerned what "unforeseeable" issues might have come up in the field.

This customer is giving me a "F" rating ,becasue I was honest and respectfully declined to do this job. We never did work on his house. After many,many email coorespondence with this customer and giving him numerous options and pricing he finally decided on a window option (Harveys best window) I gave him at a very good price.After finally verbally agreeing to a price I realized I made a mistake and because he was allready over his budget and me forseeing that we were going to have unforseeable issues when we get there I decided to pass on the job. A contract was never filled out ,only an estimate We never did the job and I was honest with him.
5.0

Mike and crew did a wonderful Job. The job was done on time, fast efficient and most of all, the quality was top notch. He made suggestions that would look better than i originally asked for and I am glad I followed his advise as the job ended up looking very nice.

everything was performed according to the contract. the work was quick and efficiently and correctly.

He's very professional, he's quick to respond to my calls, the delivery was very prompt. Over all it was a great experience.

Description of Work
He helped me with my siding.

Excellent!! The quickest in the quote, the installment and they clean up behind themselves.

It went excellent. They did a great job. Finished on time. Clean job. I didn't have any leaks after that and I have lifetime warranty.

Description of Work
I used them in 2011. Old roof tore off and put plywood down so it would be stronger and then they put the roof.

It was excellent, the crew was professional, on time and paid attention to details.

Description of Work
They resided my house. They did vinyl siding, replaced the window and doors and a bay window in my house.

It was excellent. They are professional and they came when they said. One of the windows had a crack and it was replaced immediately. It was good.

It was amazing job neat and was done ahead of schedule. Mike is the most dependable and fair person you will ever work with!

Excellent. Very easy to talk to. Deliveries were prompt and experience overall was very professional. Would use Pro Exteriors again without hesitation,

Description of Work
Help with Siding

RI Design Build Inc. is a self sufficient company providing a high level of expertise and commitment to complete your project with fine detail and meet the project finish date! We will beat any reasonable estimate. Servicing the state of Rhode Island. Additional email -ridesignbuildinc@gmail.com  …

When you choose Klaus Larsen LLC, you select a company of professionals who take great pride in our craftsmanship, and treat you, your time, and your property with the utmost respect. We make sure that before we leave your home, you are completely satisfied with our work and our cleanup, and we consider you a customer for as long as our warranty lasts. And that’s a lifetime! Klaus Larsen LLC serves Connecticut and Rhode Island with roofing services such as roof replacement, roof repair, gutters, attic insulation, and more. Put a Klaus on Your House! Call us for a free, no-obligation estimate today! About Klaus Larsen: Klaus Larsen bought his first apartment building in Denmark at the age of 21, renovating every single one of the 13 apartments in it in less than three years. At the age of 32, he immigrated to the US with his tools and $300 in his pocket to live the American Dream. Little did he know those metric tools would do him little good in a country that only used inches and feet. By 1998 he was able to start his own home improvement business, becoming a roofing-only company in 2010. Klaus is well known for his historic work, using his ingenious creativity to update antique homes so their roofs perform properly while maintaining their architectural integrity. His attention to detail and Old World craftsmanship have earned him a reputation for helping to maintain New England’s rich history while integrating state-of-the-art roofing technology into it’s homes.  …

We are a full service commercial and residential roofing company. We pride ourselves in the perfection of roofing applications. We guarantee your satisfaction, and we won't leave until the job is done right. We pride ourselves on the quality work we provide, while delivering great customer service! Call or click for your FREE estimate today! Additional DBA - Liberty Roofing Co.  …

Installation of all kinds of lifetime vinyl sidings ,windows and roofing

How is Pro Exteriors overall rated?

Pro Exteriors is currently rated 4.9 overall out of 5.

What days are Pro Exteriors open?

No, Pro Exteriors does not offer free project estimates.

No, Pro Exteriors does not offer eco-friendly accreditations.

Are warranties offered by Pro Exteriors?

No, Pro Exteriors does not offer warranties.

What services does Pro Exteriors offer?