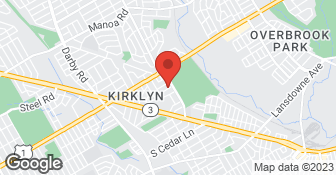 Feel more comfortable and confident in your home! Freedom Painters specializes in high-quality interior and exterior residential painting in the Main Line, Philadelphia, and other Philadelphia suburbs....

Fabulous. Justice is very personable and easy to deal with. He uses quality paint. He's hands on with his small company. His 3 workers are also a pleasure. We had last minute concerns about the shade we picked but before they started the job, he showed us how it would look. It turned out fine. He uses a primer then 2 coats. We will hire him for the interior also. Highly recommend!

Justice and his team were very professional. Everything looks great especially the dining room. Job took 3 days Would recommend

Justice was so professional, quick response, great quote, and they were able to schedule me quickly. I was also please with how the work turned out and how clean they kept my house while working! Highly recommend the company!

Description of Work
Painting a few rooms in my house.

They were great. Justice was prompt for appointments for evaluation and providing an estimate. The work was done on time and was well done. Painters were polite and left the yard spotless. They have done interior painting for us in the past and we will use them again.

They were on time and professional. They were neat and clean. They finished the job in three days.

We called the company and they said they would try to squeeze us in even though they were busy. They inspected the project and told my realtor they would call us immediately and get a quote to us. One week passed with no contact. I called and left a message. I called a few more times with no answer. Finally I got a hold of someone and asked if he had seen the property. He said yes. I asked, well, were you going to get a quote to us? He responded very smugly, oh yes. I asked when. He said, soon (also smugly). I asked if he would be able to squeeze us in as he had stated. He said, well, let's see what you think about the quote. I asked when would you be able to do the work. He said, oh, in 2 months. I asked, is that squeezing us in? Very discouraged I ended the call. Now I understood why they told my realtor they were extremely busy and very expensive (his words, not mine) - it seems like he had no intention on accepting the job. Now, the business may respond with the standard, "we're sorry if YOU felt that we were not professional - that was not our intent and we treat everyone with respect" line but this individual (Justin) was far from that. I am a physician, a professor, and have served in various leadership roles in the community and academic hospitals. I consider myself to have a thick skin but also recognize a condescending or belittling manner. Still have not received the quote. Saddened that they were given multiple opportunities to respond. It seems that he thought our property (which we rent out) was beneath his time or effort. Consider those thoughts as you decide whether or not you want their services. Professional / economic success does not entitle you to demean those you perceive to be beneath your socioeconomic clientele. Feedback: if a job is too small for you to be worth your time, just make a policy and tell your customers the reason for not accepting the job.

Justice and his crew were great, good price and was flexible on any additional items

Justice and team were wonderful to work with! We had 3 rooms painted, one of which was a large living room with darkly stained wooden beams. Justice’s quote was the best we got and he and his team worked hard to get everything looking pefectly. They spent extra time on our beams to ensure they came out how we wanted. In the middle of our job, our basement flooded and his team was flexible throughout despite the mess and additional people coming in and out of the house. Extremely clean, friendly, fair, and down to earth team -will definitely hire again!

Very strange. He had come by to give me a quote for a small drywall repair job, seemed very nice and said he would send me a quote. When I never heard from him I assumed he was flaky and figured it was for the best based off of that. I then tasked my roommate with finding a contractor to do the work. He ended up contacting the same guy, unbeknown to me, who quoted and scheduled for the work to be done. The morning of the scheduled day, my roommate had taken off of work, and he received a text that Justice couldn't come because he was worried about the snow. Not ideal, but understandable, but advance notice would have been better. When can we reschedule? Now he says that he had come to give a quote before and that he felt uncomfortable so he couldn't take the job. I learn of all this and contacted him to apologize, because while I cannot possibly imagine what I did to make this guy feel uncomfortable, I figured I'd try apologizing anyway. No response. After some discussion, my guess now is that he didn't want the job because it was too small, probably booked it as a place-holder, then took another larger job instead. Perhaps he was embarrassed about not responding to me before, or who knows what, but whatever his deal is, he could have handled it better. Either way, the damage to us is not just our wasted time, but we're supposed to list our house in a couple of days, and now we have to scramble to find another contractor to do the work ASAP. Likely we'll have to push our timeline back.

Justice and his team did an incredible job on our home. We had the entire interior repainted including all walls, trim, windows and ceiling. Justice was extremely transparent and communicative throughout the project. His pricing was competitive and the quality of his work was excellent. He was very very easy to work with and I would absolutely recommend him for any future paint projects.

Restoration 360, IICRC Certified, non-franchised, locally owned and operated water damage, flood damage, sewage cleanup, storm cleanup, basement and wall drying company headquartered at 501 Cambria Ave. Bensalem, PA with multiple locations throughout all of our service areas including New Jersey. Standing behind years of experience in the construction industry, we stand behind our work and go above and beyond to take care of our customers. Our 5 star reviews and work ethics make us stand out from the crowd.  …

We are a fully insured company serving Montgomery, Chester, Delaware, Bucks and Philadelphia Counties. We do residential and commercial, interior painting and exterior painting along with power washing. We do offer many other services, just ask! We guarantee our work and references are available upon request. Please call us at any time for Dan to come meet with you for a free estimate. We are also a registered company with the state of PA - PA158839.  …

A Local Family and Veteran owned business offering 24/7 Emergency Water Damage cleanup, Fire board-up and fire, smoke & soot restoration. We are also a full service company with in house carpenters, builders and project managers. We service Montgomery, Bucks, Lehigh, and Northampton Counties 24/7. As a local Veteran owned company we pride ourselves in our reputation for integrity, customer service and quality work. Our technicians are IICRC certified and our company is an IICRC Certified Firm meeting the highest restoration industry standards. We stand 100% behind our work and are committed to earning your complete satisfaction!  …

How is Freedom Painters overall rated?

Freedom Painters is currently rated 4.9 overall out of 5.

What days are Freedom Painters open?

Are warranties offered by Freedom Painters?

What services does Freedom Painters offer?