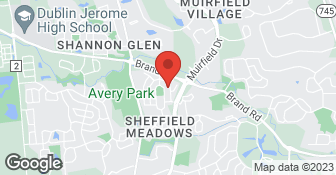 Professional moving & delivery business. We cater to your individual needs! We are experienced long distance movers also having delivered from coast to coast!...

The owner, Peter Panagiotou was very friendly and easy to work with. His pricing was very reasonable. The three men he had handle the move were punctual, professional and took great care of my belongings.

Description of Work
moved me from oxford ohio to Dublin, Ohio

Not well. Everything started off fine. I was initially impressed with Peter and his team. Although my architect and I had measured and thought that the piece could be brought in through my door, it tuned out it was just too large to get in. They spent a good hour trying various options, and finally said they couldn't do it. Fair enough. So I paid them for their time (delivery plus an hour, and also for the return trip to the consignment store where I had purchased it (an extra $85). One of their team had suggested bringing it in through a big window that I have, and I started to price out whether it would be just as cost-effective to pay for the window and frame to be taken out and reinstalled as to reconsign it (and thereby lose several hundred dollars). It turns out, I was able to find someone who was able to do it for a reasonable enough cost that it made sense to do that. So then I found out that the piece hadn't been returned to the consignment store yet, and was still on their truck, and I asked them to deliver it back here instead of to the consignment store. They said they would, but, even though the handyman I found rearranged his schedule to be able to accommodate them, they would only deliver the largest portion to my garage -- they would not bring it in the house. And then they wanted to charge me a second delivery fee to do that. I thought -- fair enough -- it's been on their truck for a few days, and they do have to return here. Well here it goes from not so great to bad. They not only charged me for the delivery, but for an additional 1/2 hour of time -- most of which I spent listening to the owner lecture me because I balked at paying his full cost both in terms of time and because he didn't have the key that is necessary for being able to keep the armoire closed.. When I balked at paying in full, he lectured me for a full 15 minutes -- telling me that so-and-so had hired him, and I could call so-and-so for their review of him, etc., etc.,, and basically getting irate because I didn't "trust" him. Well my lack of trust was partially founded. It turns out he did have the key - but I had to call the consignment store to make sure they had given it to him, and he didn't respond to my request for it until they called him themselves. At that point he texted me that he was looking for it. Four days later, I had to call again to see if they had found it. He said they had and that they would get it to me. From that point, it took another 8 days for him to get the key to me - and this time, it was only after I threatened to go to the BBB and Angies List, and also called the consignment store -- and they called him to ask him to get the key to me -- that I actually received it. Additionally, they brought the doors to the armoire into my house, and leant them up against a freshly painted wall -- with no protection, and when I finally got the armoire in (I hired another company who did a fantastic job!), there was paint along the top of one of the doors that needed to be removed (carefully!) and a divot in my wall that needed repairing. So I am in the process of disputing a portion of their charge with my credit company. Long story short, especially if you're a woman, don't hire this company. They did not treat me well at all, and the contrast couldn't be greater with the company I did end up hiring!

Description of Work
Delivery of a very large armoire

They moved a large L-shaped desk w/ hutch, office chair, cedar chest, etc. In addition, I needed a couple things moved out to my garage (a loveseat from my basement and a heavy 2-drawer file cabinet), when they arrived with my desk, etc. They were happy to move those items for me also while they were here. Their pricing is VERY fair and they were very careful with my items. I would recommend them to anyone who needs an excellent mover.

Description of Work
Peter & Jake moved some items from one house to another for me. They did an EXCELLENT JOB!

The provider and his helper were very professional, VERY careful with the cabinet. They brought it in the house and set it where I desired. They made sure that it was placed exactly where I wanted it after putting it together. The provider is EXCELLENT and would definitely use him again.

Description of Work
The provider moved a two-piece china cabinet from Reynoldsburg to Powell.

The provider was very professional. They called early in the morning to let me know their schedule so that I could plan my day. They arrived close to their day's estimate. The team leader was very friendly. When they arrived he introduced each person from the team to me. Then we went thru the details of the job. The job required going to 2 different storage units to get the furniture. The lead person was very efficient in how he organized the team. When we went to the 2nd unit that was going to be emptied later in the month, he grabbed a few boxes and took them back to the first unit. He said, we are going there anyway. That impressed me a lot, outside of the scope of the assignment, yet he wanted to serve the customer. The team loaded the truck and then took the furniture to my apartment. The unload was done quickly. There was a couch leg that had fallen off from a previous move. This team fixed the leg. No scratches, no complaints, no loitering. A job done right.

The guys called when they were on their way, arrived on time and had everything done in no time. They did an excellent job. I would definitely recommend them and will use them in the future.

Description of Work
Moved a solid maple bar top and pool table slate from the garage to the basement.

The morning of moving day the temperature was 8 degrees. It was so cold they had a hard time getting the diesel engine on the moving truck started and were a few minutes late. Once they arrived, they worked nonstop and I never heard a single complaint about having to work in that cold, cold weather. The company owner came, along with three crew members. I have plenty of furniture, some of it pretty heavy, but they got it all in the truck without incident. They even moved a desk across the street for me because I was giving it to a neighbor. The move-in on the other end also went smoothly. The furniture ended up where I wanted it. No walls were scraped up or furniture dented. One lamp got broken, but Pete discounted the price of my move to make up for it. Speaking of price, American Delivery Express was 30% less costly than the national moving company I talked to. The crew members were friendly and I would definitely recommend this firm.

I don't see how either move could have gone smoother. American Delivery Express has the tools and know how make the moves go without any problems or breakage. We would definitely use them again.

The two men from American Delivery Express were friendly, efficient, and professional. I found the price reasonable for the pick-up and delivery of three pieces of furniture, four (2 large) pieces of artwork, two large floor lamps, and other home accessories, particularly since I didn't have to gather packing materials and pack the items. The items were quickly delivered to the shop, which confirmed their receipt. I will call AED the next time I have a need for delivery or moving services.

Description of Work
American Delivery Express picked up some furniture, lamps, and artwork at my house and delivered them to a consignment shop in the Short North. The owner of the company, and his helper, carried the furniture and other items out of the house and to the truck, and packed them for safe transport. They then delivered the items to the consignment shop and unloaded them there.

Peter and his crew were the best movers we have had in the ten moves we have made. They were very polite and respected every piece of furniture. They protected my wood floors and all railings before they started moving anything. They helped put things together and made sure my antique pinball machines were handled with care. They seemed very trustworthy and I would recommend them for any job. Peter is a great at explaining the job and leaving no surprises. Him and his associates seem like a very family orentied company. Excellent Job! Thanks

Description of Work
Moved two antique pinball machines and very expensive furniture through a small hallway into a basement.