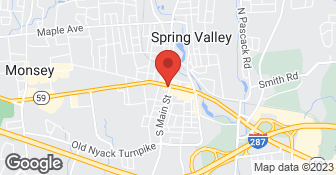 Abel Air Conditioning & Heating Systems of White Plains, NY has provided best-in-class heating, air conditioning and related services to Westchester County for a quarter century. We are a insured, family-owned HVAC contractor with expertise in all cooling and heating system installations and repairs. We have an A+ rating with the BBB and specialize in emergency HVAC equipment replacement. In addition, we also provide 24/7 emergency service.  …

Serving the Rockland, Westchester, Orange, and North Bergen Counties area, Design Air Inc is a professional HVAC service company with a team of qualified contractors that offer residential and commercial installation, maintenance, repair, and replacement services for heating, air conditioning, and indoor air quality products and systems. WWith our years of experience and total confidence in the abilities of our highly skilled and certified HVAC technicians, customers can rest assured that we'll do it right the first time.  …

We purchased a full DCS kitchen suite. The silver City team, from the owner to the Sales staff, will tell you whatever you want to hear to make the sale. The price was the best in the area. That is the reason we decided to purchase from them. We spent a lot of money and after the check was cashed they were mysteriously unavailable to return phone calls. The refrigerator was dented on delivery which resulted in a credit issued from Silver City. The owner proceeded to say he would not issue the credit until he received a credit back from DCS. This is after receiving the payment in full for all of the appliances. He was the most unprofessional nasty individual I have ever met. They removed the door to the oven during delivery and didn't know how to reinstall it. They proceeded to give us the warranty contact number, to have someone come out and fix the oven door. When we called the contact number they provided the company said they don't support warranty repairs for DCS. The bottom line is Silver City sells high end appliances that they are not familiar with. We ended up going to the local competitor to address install problems. I would not recommend this company regardless of how good the prices are. You will definitely pay more in the long run!

Pricing was straightforward and unbeatable. After I made my purchase, they arrived within the designated time frame for delivery. They immediately went about unloading, unpacking and installing everything. They took away the old refrigerator and all packing materials from the new appliances. The washer and dryer were so well installed that they are more quiet, balanced and stable than any others I have seen installed at friends' homes. They took the time to get it right and then cleaned up after themselves. What more can you demand?

Description of Work
I bought a washer & dryer, dishwasher, refrigerator (as my second) and deep freeze. the prices are better than anything else in the area or on-line. Delivery occurred precisely when scheduled. Set-up was done for everything but the dishwasher which my plumber installed who also connected the water line for the ice maker in the fridge. No muss, no fuss and no problems. It doesn't get any better than this.

Worst experience ever!! The unit stopped working within the 30 days that they installed it. When I called the owner he was very nasty to me. I had to go through the manufacturer to replace the unit. It took 3 weeks to get the new unit from the manufacturer to Silver City and when it came in he never called me. I called him and he said that there was 15 people in front of me so I asked for my money back. The owner refused to replace the unit as well as refused to give me my money back. Worst experience ever!! I would not recommend this service provider to anyone.

Description of Work
They came out and installed an air conditioning unit.

Description of Work
We purchased a Bosch dishwasher and Silver City's price was the best out there. They ordered the product and had it installed in less than a week. The transaction was done completely by phone and Bruce was a great salesman. No overselling, just good service at a good price.

They delivered on time. However, when they removed my old refrigerator, I had mistakenly left an antique butter dish in the dairy bin. I called the store immediately to inform them and the salesperson informed me that the delivery truck had not returned yet, and he would call me when they returned. He never called me back. I called again that same day, got the same person and he told me that he told the driver to check the truck, but he did not and he went home already.I asked him if he would check the truck and he said it was locked up and the refrigerator was in the junkyard already. I was furious, as I has told him about the butter dish even before the truck returned. His callous disregard for my property was astounding. I explained to him that the butter dish was a family heirloom and was irreplaceable and I asked for the name of the junkyard so I could call them. He said it was their own junkyard right next door. Again, I was astounded that he would not have volunteered this information. I said I would come there myself and look for it. He said it was locked and no one could get in there, and he promised to have the driver look first thing in the morning and he would call me. He did not, and after waiting for half the day, I finally called him again. Again I spoke to the same man, who informed me that the driver said he checked the truck and the refrigerator, and that the butter dish was not there. I told him that I knew, ABSOLUTELY, that it was left in the dairy bin, along with a stick of butter (in the dish) and a package of american cheese. I absolutely knew this because I had just gone shopping and just put them there, and it was fresh in my mind.There is no doubt whatsoever that it was in the refrigerator when they took it. I asked why he didnt call me back and he avoided the question. I asked to come there myself and look and he told me that the refrigerator was sent to the dump.Needless to say I was very upset. His attitude was Oh well.....and when I insisted that he question the driver again he refused and said he had done all he could. He actually did nothing. I fired off an e-mail to the owner who called me the next day, and promised that he would look into the situation himself and call me. That was the last I heard from that store. I sent another e-mail but I was ignored. It is my opinion that this store has no concern for the customer after the item is delivered, and that they are dishonest at best. My property was never even looked for, never mind returned, and noboby seemed to care at all. Meanwhile I was devistated by the loss of a family heirloom that just cannot be replaced. It would have been nice if someone at least acted like they cared. I will never, ever, buy from there again, and I tell everyone I know not to buy from there either. Word of mouth is powerful and I hope my story has an impact on their sales.

Description of Work
We bought a refrigerator/freezer from them.We shopped around, and they definitely gave us a very good price, with delivery.

The service was excellent. The appliances were great. I will consider using them in the future.

Description of Work
I purchased a cooking range, a refrigerator, an oven, a microwave, and two dishwashers from Silver City, four months ago.

I think they beat everybody in town in terms of their reasonable prices. I had no problems at all with the sales person; he was a delight to deal with. The installers were also fantastic. They installed it well and cleaned up after wards, it was wonderful.

Description of Work
I bought a refrigerator from them. They installed it for me and took away my old one.

I must say that I was pretty impressed with this appliance sales center. They charge very fair prices I thought. I was also rather pleased with their delivery and their installation services. I would recommend them to others.

Description of Work
We recently purchased our washing machine over at Silver City as we were in the process of trying to update our appliances.