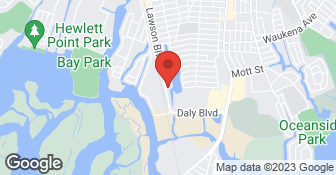 To call the owner Brian, the owner, a weasel would be an insult to the weasel population across the world. Do not be fooled by his initial boisterous personality he may display at your first meeting. If your objective is to simply empty a house, liquidate the contents with a wildly erratic pricing system (more on that), and have a man reign over the sale like a crass, belligerent carnival barker of the 1930's, then Brian is your man. He is cheap and sleazy and gets the job done in the same way. For those of you who want to execute this type of sale with integrity and decorum read the following examples of how you will not achieve this with this company. Many of the items in the house with high values were priced ridiculously low or ridiculously high. Why low? Well what Brian doesn't disclose is that he runs a warehouse in Long Island. He has friends or associates purchase those low priced items and guess where they end up at a much higher markup? The warehouse in Long Island! The same goes for items priced extremely high. If you have hired him for the subsequent clean out, these higher priced items that didn't sell and were supposedly going to charity go to guess where??? The Long Island warehouse! The REST of the items in the house WERE NOT priced, giving Brian carte blanche to price at will. And again--as I stood in my own house AND listened I would overhear him selling hundreds of dollars worth of grouped goods (i.e. china) for $25.00. Again, these items were most likely brought back to his warehouse. One might ask: Why would he undersell when he makes 35% of the total gross? Because friends..,he will be making a second commission when they end up in Long Island. He will swear up and down he is a "certified" appraiser of Art, antiques, oriental rugs, etc. You name it, he is equipped to price. He will bark this at the sale buyers, the homeowner, even the mailman as he walks by. The point is--these are all fabrications--that he uses his bogus credentials with increasing frequency, volume, and mendacity to bully and intimidate whomever he feels he needs to. Do yourselves a favor. Go to his website and look at his purported awards of distinction--including his recognition by the BBB. This is all fabrication. The BBB has NO record of him. Most of the other awards either didn't exist or if they did, there were no record of him ever receiving one when I called the reward establishment. There's still more. He will push your clean out date, if you have asked for this service as well, to a date that is pressed right up against your deadline to be out of the house, citing "other sales" that make it impossible to do it sooner. And guess what? He can't quote you a price until your estate sale is done........Let me tell you how this went.....Our sale made about $12,000. He kept almost $4300 as a commission. That left us with roughly $7500. His estimate for the cleanup right on top of the closing date of the house? Almost $5,000. Fortunately, I had sensed this coming and had given a retainer to a well known clean out company and retained the services of our usual cleaning ladies. The total cost for the same job--$1,000.00 I don't like to disparage people and almost didn't write this review because there was nothing positive to say and we have enough negativity in this country right now. If Brian read or reads this he would have an answer and biting comeback for everything. If I could turn back time, I truly would donate the entire contents of the house rather than to allow him to make one cent of profit off of me and my family. Please, if you or your loved ones, or your friends or your neighbors EVER contemplate using this man (this business goes by 2 or 3 different names by the way) you MUST RUN THE OTHER WAY and LOCK YOUR DOORS.

Description of Work
Estate sale and subsequent clean out of remaining items in house.

We had another problem occur when he noted that a brass wood holder was sold for $5 in which it was sold for $15.00. Everything that was mine he tried to put the price so high that people would not buy it. I tried to talk to Brian later about the sales at the end of the day and he proceeded to again yell profanity at me. I left him and walked outside and his staff apologized for his behavior. He had a total lack of respect for the people, customer, and property. He tossed his cigerettes on the front lawn and left his personal garbage all over the house. I would caution anyone ever considering to use him to find someone else.

Description of Work
My father passed away and we were liquidating his estate and decided to have a tax sale. We spoke with a representative from 2 much stuff 4 me and a man named Brian came over. He gave me a contract to say that we can do the sale on the 12th of April. I explained that I couldn’t sign right away because I had to talk to my sister. He said ok and left the contract. I look through the contract and did not want to sign because there was a minimum cost and I also asked if I could bring things from my house that I could receive the benefits from and then the rest would go to myself and my sister. He said that was perfectly fine, he was afraid to agree to contract with no minimum for fear there would be nothing left. I said he could come back to the house and look at what was left and then we could agree if a minimum still applied. We agreed to meet and Brian met me at the home. He saw all the things and he decided no minimum would be fine. The day of the sale a man comes up to pay and had something from what I had provided and something from my father’s estate. I checked with Brian to make sure that he was separating the funds between my things and my father’s estate. He then yelled out loud “what is the big problem, it’s just $5.00”. He then yelled profanities at me. I said to him “you said you would do it and I expect that you do it”. He said he knew whose was whose and I brought a bunch of “s***”. The woman that works for Brian actually apologized to me for her behavior. Through the course of the day when I talk to different dealers that come in through passing, they said they know Brian was not a good guy. Earlier that day I had a painting that was worth at least $125 and the man wanted to pay $100, yet Brian said it was worth $125 and would not negotiate with the man or consider the $100 offer. The painting then was never sold. At one point there were dealers that came specifically looking for dolls Brian made them sorry that they didn’t get to the sale earlier by lying there was a whole collection of dolls that happen to be there earlier that were sold.

Bonded
Insured
All statements concerning insurance, licenses, and bonds are informational only, and are self-reported. Since insurance, licenses and bonds can expire and can be cancelled, homeowners should always check such information for themselves.To find more licensing information for your state, visit our Find Licensing Requirements page.
General Information
Free Estimates
Ask for Details
Eco-Friendly Accreditations
No
Payment Options
Visa, MasterCard, American Express, Discover, PayPal
Senior Discount
No
Emergency Service
Yes
Warranties
No

How is 2muchstuff4me overall rated?

2muchstuff4me is currently rated 2.2 overall out of 5.

What payment options does 2muchstuff4me provide

No, 2muchstuff4me does not offer eco-friendly accreditations.

Does 2muchstuff4me offer a senior discount?

No, 2muchstuff4me does not offer a senior discount.

Are warranties offered by 2muchstuff4me?

No, 2muchstuff4me does not offer warranties.

What services does 2muchstuff4me offer?