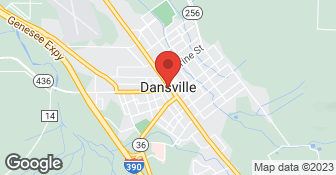 Description of Work
Cleared and poured a concrete patio and removed front porch concrete base and then stamped it...He also suggested doing, in front of my two car garage, a six foot stamped concrete apron that tied into the side walk and new porch floor...My wife and I were extremely pleased with his work, neatness, and overall professionalism of Mr. Caldwell and his crew....

Pat and his crew were kind, friendly, and professional. First, Pat always called us back and kept us informed of the project status. He was there to answer any questions no matter how insignificant they were or how busy Pat may have been. Pat is a good salesman but his recommendations are justifiable. For example, when I wanted to build a slightly smaller shed, Pat convinced me that adding the extra square footage would be well worth it and he was right! Pat was also correct when he persuaded us to add the retaining wall to hold back soil and divert water. We were’t going to add the sidewalk but after speaking with Pat, we learned that some of our water problems were due to shoddy work from the previous contractor. See, the company who installed our old sidewalk poured the concrete on dirt without using any stone base. Subsequently, the sidewalk heaved downward toward the house, allowing water to penetrate our garage. The new sidewalk is not only whiter and crisper looking, but we don’t find any water in our garage after a heavy rain storm. The patio looks good! We chose stamped concrete and had a few challenges during the stamping and pouring process. Pat worked with us to resolve these imperfections and, as a result, the imprints are defined and the colors vibrant. Pat’s crew took great care to ensure our patio would be welcoming and of the highest integrity. Pat’s craftsmanship and dedication to customer service is exemplified in his final product. We are very happy with our patio and look forward to many summers of use. Many thanks to Pat and his crew for making our outdoor project a reality.

Description of Work
Pat and his crew completed (1) a 400 square foot stamped concrete patio (2) a bright and inviting sidewalk which extends from the patio, around the garage, terminating at our front porch (3) a spacious 16 ft x 24 ft shed which complements our home nicely and (4) a 100 ft retaining wall that is not only functional but adds additional seating to our patio area.

It was fine. It was a little lengthy but they did explain and they did follow up saying that they were very busy but would still get back to us. They were very professional about it. The people were very good.

Description of Work
Caldwells Custom Concrete gave me an estimate to asphalt my driveway.

Per our original meeting, the intention of installing a driveway at this location was to be able to utilize the overhead door to the garage to park your car inside. During this meeting I was very reluctant to install a driveway at this location because of the angle this driveway was going to have to be, due to the elevation difference between the garage floor and the road. There were alternative options suggested at this time to accommodate additional parking with a retaining wall and concrete parking area with no access to the garage. Also, it was suggested to put an addition on the garage on the existing driveway side which would allow a 2 car garage which would be accessed by the existing asphalt driveway. At this time neither option was anything you were interested in and I left with no agreement as to what, if any, work we were going to complete for you. A couple of weeks later your wife contacted me and asked if I would come up and install the driveway that you wanted. Knowing that driveway was going to be steep and the objective was to be able to utilize the garage to park your car, you decided to proceed with the project. On July 3rd, 2013, we completed the excavation and form work for the new concrete driveway. Throughout the day of July 3rd several pictures were sent via cell phone from both your wife and me during the excavation and forming phase. During this time, you agreed to add an additional 3 feet in width to accommodate 2 cars to park side by side. Due to rain we were not able to pour the concrete for the driveway. About one week after the driveway was complete I received a phone call from you expressing your concerns about the steepness of the driveway and safety issues. At this time the garage door had not been replaced so we could not verify that the car could be parked in the garage. On August 5th, 2013, myself and an employee met with you to go over your concerns with the driveway. At this time the overhead door had not been replaced so we were still unable to see if the car could get into the garage. When we left that morning we agreed we would come back over with the laser level to show you the actual elevation differences we created to accommodate your original objective for the driveway. On August 7th, 2013, myself and an employee returned with the laser level to show you the actual elevations we had created to accommodate your original intentions for the driveway. We walked through all the elevations we created to make the driveway as flat as we could, while also making sure your car could get into the garage. I drove your car in and out of the driveway 2 times without any problems with scraping which was also a concern. Upon arrival I noticed that the new overhead door and automatic opener had been installed, which you confirmed had been completed that day (August 7th, 2013). I drove your car up into the garage to verify our elevations were correct to allow the garage to be usable to get in and out of. Throughout the 1 ½ hour we went through several alternative options to flatten the driveway out so it would not feel like such a safety issue. During this time both myself and my employee expressed our concerns about creating one straight angle from the road to the garage. We feel your car is going to hit on the frame before you can get all the way up into the garage. We confirmed on the existing driveway from the underside of the car’s frame rails to the concrete you currently only have 3 ½” of clearance. This is with a completely empty car with no passengers or any miscellaneous items that would add weight to the car compressing the shocks and springs. During our conversation you said several times that your major concern was safety and the steepness of the driveway. You were uncomfortable parking a car on the driveway. When the concern of not getting into the garage was brought up by me you said the steepness of the driveway is more of a concern than if you can get in and out of the garage. The original objective of this project was to create a driveway so you could utilize the garage. You commented to me it was not a big deal if you could park in the garage or not with our original meeting that was the main objective and the investment of a new overhead door and automatic opener confirms to me that was your original intention. With the amount of time I have spent going over the driveway with you and physically being able to see your car utilize this driveway, I feel very confident that we installed this driveway the only way it could be done to accommodate the original objective. I know we are in disagreement with what we have done and what you would like to see done. I am not willing to take a 100% loss on redoing this driveway based on what you think might work. I and my crew have 20+ years of experience in the construction trades and I feel we achieved the original objective.
5.0

Pat Caldwell and his crew were terrific. The driveway is perfect. They worked well and were careful with the surrounding garden in a tight space. As an extra bonus the finish is beautiful—brushed concrete with a flat edging. Pat was on site working and supervising the excavation and construction. I would certainly use Caldwell again.

The project was started one week from the contract signing date. The service was professional and the workers skilled. The owner of the company kept me informed of the progress on a daily basis as I was out of town. He provided excellent guidance in the process of choosing the stamped design and coloring for the walkway/patio. When I arrived home one week later it was a gorgeous site! I would recommend this company in a heartbeat. Thanks to Caldwell's Custom Design the outward appearance of my property, is a welcoming site! ,

Pat and his crew were very professional. I would definately hire Caldwell's again!

Description of Work
We had Pat pour a pad 10 feet in front of our garage and then add a stone area off to the side for additional parking. Pat took my initial idea and tweaked it so that now we have added parking as well as the pad!

They told me upfront that it wold take a few months together to my job, and the timing was just as predicted. They came and completed the job quickly and professionally.

Description of Work
They excavated footing trenches, poured concrete footings, laid concrete block for stem walls, and poured the concrete floor for a 24 x 24 foot garage. Their work was excellent. They worked with me so that I could lay in PEX tubing for in-floor heating.

They are busy enough that it was hard to get an appointment, but once we met things happened quickly. It is the best looking work in the subdivision, but more importantly, it is the best quality work. I can look and see neighbor's work with specific problems which did not occur with my work. The driveway is tied to the garage floor and sidewalk with re-bar drilled into the concrete. Steel mesh was used along with the re-bar for reinforcing. Two coats of sealant were applied. Joints were saw-cut rather than formed - a premium process that results in a more attractive and better winter surface.

Caldwells Custom Concrete Inc is currently rated 4.6 overall out of 5.

No, Caldwells Custom Concrete Inc does not offer eco-friendly accreditations.

No, Caldwells Custom Concrete Inc does not offer a senior discount.

No, Caldwells Custom Concrete Inc does not offer warranties.