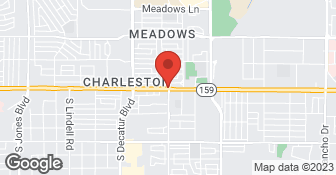 We are Appliance Experts in repairs and have been in Las Vegas for 23 years and offer very good service at your door in 2 hours have 7 servicemen all background checked and many years of experience we can repair any make or model....

Still have a leak and when attempts are made to contact, no one answers the phone and there is never a call back. Please note that there are NO good roofers in the Las Vegas area.

Description of Work
They failed to fix the fridge and caused more damage and then refused to make it right! I got the manufacture to come and repair it and I am now seeking a refund for the $400 deposit I gave them.

Description of Work
I called and made an appointment for my washer as it was leaking from the front of the machine the person that came out was very professional and was able to find the problem in10 minutes and gave me the price to repair the gasket that he showed me was broken he replaced it in 30 minutes checked his work to make sure no more leaks .

I am glad you are satisfied with our service please call on me if I can be of future service.

Install took longer than expected. Owner spent most of time on phone, not even watching over job. Actual installers did not seem knowledgeable. I complained from day 2 that one unit not cooling. They could not come out until following week. Did not show up. I called, Robert, the owner, he said sorry, I don't know why it wasn't on the books. We can come next week. AC now not even working. I called few days later due to another unit leaking. Still going to be a few days to come. Next day, other unit leaking. Now, NO AC in house. I looked in attic, drain line on one, not even connected, other overflowing due to trash in drain pan. Finally they show up. They worked 2 days in attic. I went to see what they were doing. They cut a hole on side of unit. I told him there is a prefab connection, What are you doing? He responded drain line would be better connected here. Also units still leaking. They just moved secondary pan to catch water. I called owner with my concerns, he was too busy to come out. Well, I called another company to come out. In 5 minutes, he found problem. All 3 units installed upside down! I called owner. He actually argued with me and said I was crazy. He again could not come out for several days. Well, units overflowed drain pan again, ceiling collapsed in kitchen and pantry. I spent full day removing blown in insulation. I threatened to sue. Still few days to come. He finally hired another guy to check it out. Yep, all upside down. New installer seemed knowledgeable. Spent full day fixing units. Still had wiring issues that needed fixed. Drywall repair guy showed up for 3 hours and never saw him again. A week later, hole in kitchen covered, but not repaired. Insulation still falling down in pantry. Screws in bedroom holding ceiling up. I voiced concerns that owner never looked at work during entire process. He said too busy to watch everybody. This company came in $2000 less than another bid. I am so sorry for my decision.

At Controlled Comfort, we understand that we are coming to your home or business and we are grateful for the opportunity to earn your business for the long haul. We are dedicated to providing outstanding customer service, honest diagnosis, exceptional craftsmanship and excellent prices on all our repairs and installations. Our team of technicians are trained to provide you with straight forward estimates, so you're provided the information you need to make an informed decision about your HVAC equipment. We service both residential and commercial systems and offer a number of great financing options through our partners at Wells Fargo Bank and Synchrony Bank. We look forward to adding you to our growing list of happy customers. Thank you for choosing Controlled Comfort.  …

We are a multi year super service award winner! Alaskan Plumbing Heating & Air is a leading installer and servicer of high-efficiency air conditioners, furnaces, comfort controls, indoor air quality systems, and plumbing products for the commercial and residential industry. The company is committed to providing customers with unsurpassed customer service and energy efficient HVAC solutions that improve and maximize comfort within the home and workplace. Alaskan Plumbing Heating & Air is a locally owned company, proudly serving the Las Vegas Valley since 1976. We are avid supporters of charitable foundations that serve the Las Vegas community.  …

We repair all brands of air conditioning and heating equipment. We can replace and install you air conditioning and heating equipment with the most reliable units on the market according to Consumer Reports on line. We also provide indoor air quality products that will clean your air to the highest standards, remove odors, and also humidify your home at healthy levels. Our maintenance program is impeccable! We are veteran owned and operated.  …

Vegas Appliance Repairs is currently rated 2.3 overall out of 5.

No, Vegas Appliance Repairs does not offer free project estimates.

No, Vegas Appliance Repairs does not offer a senior discount.

Are there any services Vegas Appliance Repairs does not offer?