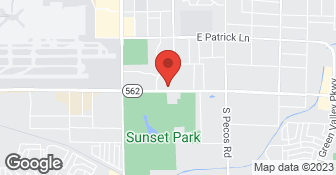 Established in 2013, Pure Plumbing has quickly earned a reputation as one of the most trusted plumbing companies in Las Vegas. The family-run business offers a wide range of high-quality plumbing services at reasonable prices for residential and commercial customers. With expert plumbers on their team, Pure Plumbing can tackle any size or scope of plumbing work, from general plumbing repairs and installations to complex jobs such as water and sewer line replacement. Dedicated to building long-term relationships with customers, the company’s team is always willing to go the extra mile to ensure customer satisfaction. Additionally, Pure Plumbing uses only state-of-the-art equipment and environmentally friendly practices. Contact their office today to schedule an appointment or for any emergency services. ...

It went very well and will use them again in the future.

Description of Work
They change toilet and bathroom faucet.

Thank you for your kind feedback! We truly appreciate it and look forward to assisting you with any plumbing needs.
3.0

This is a difficult one to write because, in the end, I think the actual work done was completed very well and professionally. We had a tankless water heater installed to replace our aging tank. The problem i have is with their business practices and lack of effective/accurate communication. A two-day job stretched to a week+ due to workers leaving early every day for one reason or another. Admittedly, one of the days was understandable due to a family emergency and I absolutely cannot begrudge somebody leaving early to attend to their child. That’s just being a good dad. The job completed on a Friday and I was repeatedly assured that an county inspector & Pure Plumbing employee would be arrive early Tuesday (Monday was Memorial Day) to close the job. Nobody ever showed up and I was told nothing. I came to learn that Pure Plumbing plays some shady games when it comes to permitting a project. They (illegally) do the work without pulling permits. Then, after it is done, they submit drawings of the completed work to get an after-the-fact permit pulled. It’s only then that they request an inspection which happens a couple weeks after the fact. They also expect full payment before the work passes inspection. I tried to contact the owner of the company (Andrew Aranda) via phone and the email his office supplied in order to discuss/resolve the issue, but never heard a reply. Unpermitted work exposes the company and the homeowner to potential fines and long delays in completion. Even though I love the work they did and would love to use them again, I would hesitate because of legally questionable methods that cast a shady layer over the operation. Are there other hidden corners being cut? Their talented roster of tradesmen/women isn’t worth doing business with because legal games are being played with the county. I plan on contacting a Clark County agent to discuss this job and warn them of potential future dishonesty.

Representative for the company was very professional and detailed in his information. I will be using this company in the near future.

The price was more competitive than the other quote I received (by $300). Work was done immediately, quickly, and thoroughly explained. The gentleman was polite, personable, and professional. I'm elderly with a quirky, cynical outlook on life and sensitive to ageism; there was none. I especially appreciated that. Pure will be my plumber of choice for any future work.

Thank you so much for your kind words [Member Name Removed]! We truly appreciate your feedback and our honored to have earned your loyalty. Thank you for the opportunity to provide phenomenal service and please do not hesitate to contact Pure Plumbing for any future plumbing needs at (702) 534-1910. Have an amazing week and weekend from the Pure Plumbing team!
2.0

We called to get a price, as we were doing some comparison shopping. They wouldn't give us a price, even after I supplied the brand and model. In fact, they never called us back after I provided that information. They insisted on sending a tech out to take a look. Shouldn't be necessary for the job we needed, a waste of our time and theirs. Makes me think the tech would have "found" some problem that needed to be fixed. They won't get any business from us.

Hello [Member Name Removed], We completely understand your frustration with your unforeseen plumbing issue. We understand that naturally your first concern would be pricing and unfortunately our CSR’s are not licensed or certified to provide pricing over the phone. We would love to schedule you to have one of our highly qualified technicians come to your home to complete a no-charge evaluation then provide several cost-effective options that will resolve your plumbing issue. We look forward to hearing from you. Thank you, The Pure Plumbing Team
4.0

Pure does everything right until the price is quoted . Sent first person out to assess work and leave a quote. Told us our present water softener wasn't working properly and should be replaced. We opted to receive their quote but have other work done. Felt it was high, but the workman are pleasant and a second person came to do the work. They sent texts with photo of person coming to house. Great!

Horrible used car sales men. We had a back up in our master bathroom called them out and the nicest gentleman came out. They said the would snake the drian and have us going in no time but wanted to check so other stuff while they did that. They then recommended we have our pipes jetted since they were older. We told them we would think about it. oh we will give you 10% off if you do it now. We told them we couldn't do it now anf magically the snake wouldn't work and the only option was to jet the pipes. we paid $2200 to get it done with the promise it would fix everything and we would need a plumber for at least 10 years. About 24 hours later the same clog returned and they had no one that could come out till the next day. We were not happy but figured we would just use the second bathroom. A few hours later my 2 year old daughter went into the second bathroom slipped and hit her head. Whatever they had done had actually clogged the whole house and now simply running water in the kitchen. which is in a different line , pushed water out the bottom of the second toilet and now we had a flooded bathroom. Called with no help. After calling about 5 times and speaking with the "manager " someone came out at 10:30pm. We had 6 people with no bathrooms or water until then. This gentleman comes out uses a larger snake and fixes the problem (jetting was never actually needed)! We were told by this "manager" he would be talking to his "manager" about a partial refund only the next "manager" has to talk to his "manager". No one ever calls back when they promise to and we have now talked to 3 managers with no solution and no call back for a week. Do not use!!!! And do not read their reviews on their website, they do not let customers leave reviews, no wonder they are all 5 star.

We completely understand your frustration and disappointment with the service you experienced. This is not in line with our core values and our mission to deliver a phenomenal service. We appreciate you taking the time to bring this to our attention and assure you that it has been addressed and has been a learning experience for all of us at Pure. We hope that providing a full refund will rectify the situation; however, If there is anything else that we can do please let us know. Thank you for your honesty and we hope that we can regain your trust in the future. Sincerely, The Pure Plumbing Team
1.0

No return calls for our estimate, had to engage our landscaper (who recommended them) to "encourage" them to show up and finalize the estimate. The estimate was fair and the work was performed. However, they installed the wrong sized gas line so I cannot install all the items I had given them on the list due to insufficient gas supply. Of course, to redo would require tearing up hardscape that was placed over the line. Complete fail by Pure Plumbing.

Hello, We truly apologize for the experience you have had with our company. We would love the opportunity to speak with you and see if we can rectify this situation. We value your time and feedback and we appreciate you bringing this to our attention. Please give us a call at your earliest convenience to speak with our manager. We look forward to hearing from you. Thank you