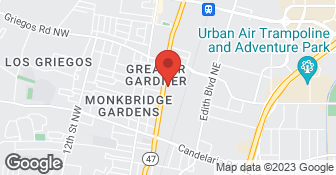 Thank you so much for the amazing 5-star review! We appreciate your feedback and are always happy to hear of your pleasant experience!
5.0

Description of Work
We had an industrial clogged sink

Thank you so much for the feedback on the services you received. We are happy to hear that the issue was resolved even if it took longer than anticipated.
5.0

They people who answer the phone are very pleasant . they have a good communication . they send text messages to track the technician the service is good too. They are very quick

Description of Work
They help me to drain the floor

We greatly appreciate your kind words regarding our company and team members! It's our pleasure to be your chosen plumbing/HVAC company.
1.0

Avoid this company! They are completely untrustworthy! I was disappointed in Travis, the gentleman that serviced our AC. Our AC went out and we were able to quickly schedule an appointment, their booking agent was extremely professional and their response time was very quick. The technician that they sent out to diagnose and repair our AC was Travis. He seemed very professional but the "temporary" repair that he performed only worked for about 2 hours and then the AC was not working again. He told us that he could get the AC working again, but that he would have to replace parts on our blower motor and "clean" the unit at a cost of $1300. When he left his temporary repair was working, but within 2 hours the unit was not working again. I researched repairing this part online and saw that experts recommended that we replace the unit if we could. So I asked for a quote to replace the system since it is 16 years old. They quoted me $15,000. I contacted two other AC repair companies that quoted me $10,000 & $9,000. I scheduled another appointment with Travis to repair our AC, $9,000 is a cost I was hoping to avoid for another year. Unfortunately, Travis failed to properly diagnose our system at the first appointment. He never took the cover off our AC unit, never actually inspected anything except the blower motor assembly. If he had done the job we initially hired him to do - he would've known that the unit was unrepairable. Instead, he conned me out of $1300 by putting in new parts on the blower and then "discovering" that the unit was not repairable when he took the AC cover off and looked at the coil. Since he had already installed new parts on the blower - he charged us the $1300 for the repair but assured me that I would get some of that money back when he replaced the entire system for $15,000 which other ABQ companies, more reputable companies, had assured us was highway robbery. At this point he began pressuring me to apply for financing to replace the system. We, also, discovered that he had built in extra costs into the bid and was working on a commission that incentivized increasing the cost. He said that we could only get back the $1300 we had given him to repair an unrepairable system if we went with his $15,000 bid. At that point I realized that I had been conned out of $1,300. I quickly had him on his way and began working with more reputable companies to fix my AC. This was a terrible experience from start to finish. Please read this company's YELP reviews. This company routinely charges people for repairs that they do not perform or perform incorrectly. Do not use Albuquerque Plumbing, Heating and Cooling and especially beware of Travis.

We're sorry to hear of this unpleasant experience with our company. Your concerns have been forwarded to the appropriate manager, and we've asked them to call you to discuss this further with you.
4.0

Their service was good, that is why I've kept using them, they're just great.

Thank you for this positive review of our company! We're happy to be your trusted plumbing/HVAC company.
5.0

From the moment I called to get an estimate, I was treated with courtesy and professionalism. Joshua Miller came out to inspect the old unit and promptly gave me a written quote. The quote was lower than one I had received from another plumbing company for a 14 seer unit. Darion and Erik who did the installation were prompt, very professional and courteous, explaining everything they did, showing me photos, etc. They went the extra mile to make the unit look nice from the street. When having the unit inspected by the city of Rio Rancho, the inspector told me they had done a superb job, one of the best he had seen. I highly recommend this company and will be using them for some plumbing issues in the future.

Thank you so much for your amazing review of our team members, Josh, Darion and Erik! We are so happy to hear of the excellent care they provided to you and your home, and of their professionalism! We will share your kind words with their manager.
5.0

Did it all in 6 hrs. Ask for Dallas

Thank you for the stellar review of our team member, Dallas! We're happy to hear of the excellent service he provided to you and your home.
5.0

I had two other companies work on this problem. Both failed, but both took my money. ABQ P H C fixed the job right the first time. Should have gone with them in the first place would have saved money and time. Preston T. saved the day!

Thank you for the wonderful review of our company and team member, [Member Name Removed]! We're so happy to hear of the stellar service you received at your home!
1.0

Six years ago I trusted Albuquerque Plumbing to install a high end Weil McLain high efficiency boiler to heat my home. the cost with tax was $19,997.13. When I turned on the boiler this year it would not operate, and water ran out of the unit. I turned it off and called Albuquerque Plumbing to have them come look at it and let me know what needed to be done. They refused to do so unless I paid them an additional $90. We should all think twice before making a significant investment with a company that won't inspect a problem with a unit they recommended and installed without charging a fee.

Description of Work
Inspection of boiler they installed six years ago.

We appreciate the time you took to give us your feedback. We are reviewing our diagnostic pricing. The team with Albuquerque Plumbing encourages our customers to continue with maintenance performed by a professional after a new unit is installed. This can also prevent improper shutdowns, and even costly repairs. We believe this helps protect the investment made with the purchase.
5.0

I used Angie's List to look for a plumber and was quite apprehensive based on reading so many negative reviews about how many dishonest plumbers are in Albuquerque. Albuquerque Plumbing, Heating & Cooling called and left a message for me and I called this morning. My toilet wasn't draining, after repeating plunging. Fore Gen Plumbing called and told me their starting price is $129 and I wouldn't find a lower price. They were wrong. Albuquerque Plumbing, Heating & Cooling quoted me $75 for auger service, from the toilet side. The auger didn't work, so the plumber offered $105 drain cleanout service. When the clog was cleared in 5 minutes, he told me the $105 included a 90-day warranty, free reservice if I have any more clogs, leaks, issues. Corey did an outstanding job, very impressed with his professionalism, courtesy, honesty and integrity. Not only did he call ahead, arrived early, he wore a mask and shoe covers.

Thank you for sharing your positive review with the residents of Albuquerque! We're happy to hear of the stellar service provided to you by Corey!

Albuquerque Plumbing Heating & Cooling is currently rated 4.8 overall out of 5.