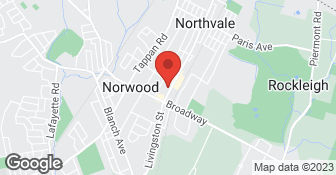 Flue Tech, Inc is your chimney and venting expert. With over 20 years of experience, our technicians provide everything your chimney and vents need. Don't have one company build your fireplace and another clean it. Let Flue Tech Inc take care of you. We can do the intricate brick work your home requires. From tuck pointing to repairs to full builds, we do it all!Through our commitment, experience, and expertise Flue Tech, Inc. has established a business relationship with our clients that will last a lifetime. Flue Tech is family owned and operated and growing every day. We have the resources to work in the tri state area and still provide personal one on one service to our clients. Our techs attend chimney conferences whenever possible; where they obtain even more industry knowledge. Flue Tech is fully insured and licensed. Copies of both are always on board and ready for the clients inspection....

Scheduled fireplace insert three times over 6 months. First time canceled due to emergency. Second time canceled same day because did not have the insert (so scheduled work twice without actually having insert)..Today, scheduled for after 2 PM work. No show. No call. No response. If they happen to come, will update review Currently, Flue Tech appears to be just a big joke. Would not trust them to clean my floor, much less fix something that could burn your home down.

[Member Name Removed], we are sorry there have been so many difficulties with your project. As you are likely aware, there is a world-wide supply chain disruption that is affecting all businesses at this time. We've done our best to work on your project as the materials arrive. The remaining materials were expected to arrive in late September; we added you to our system with a tentative date for last week to give our supplier extra time and hoped we would have your materials in hand on that date. We now (for the first time) have a tracking number and expect the remaining materials to arrive this week. If you would like to call our office and schedule a time for us to complete your project, we would be more than happy to do so.
1.0

It was very nice! They were accommodating, and clean.

Description of Work
They cleaned my chimney.

They could not schedule the initial appointment until January 6, 2021.

Thank you for contacting us to schedule a cleaning appointment. We are sorry that you are upset we cannot schedule your appointment sooner. We are in the middle of our busy season. This year has been extraordinary because we have double the workload now because of work that could not be done during the Covid shutdown. Our clients rate us very highly because we do excellent work. We hope you'll consider keeping the appointment we scheduled knowing that we will do a quality job for you at that time.
5.0

Service Technicians arrived on time and ready to work. Executed the job professionally. Informed me when it was completed as well and cleaned up afterwards.

They answered me right away and were professional with the estimate.

Description of Work
We have a wood stove insert in our fireplace; need a yearly cleaning before using this year.

I hired FlueTech to repair my discontinued gas log fireplace based on the good reviews here. I had a completely different experience with them, feeling they were either grossly incompetent, or possibly dishonest (in order to sell a more expensive service). I'm not sure which, but either way I give them an F rating for total failure. They said the PILOT LIGHT didn't go on (it did but they didn't bother to put a match to it as the affixed label clearly states to do), that it would be $1500 to repair IF they could find original manufacturer parts, but they couldn't (working parts are readily available on the Internet from other manufacturers). Their only resolve for me was to put in a new insert at a cost of $10,000-$15,000 with permits. I declined. I recounted the above to a manager who waived the bill for the service call and said he'd look in to my complaint and call me back. Never heard from him again, after almost 3 weeks. I then hired MR. CHIMNEY. Mike was knowledgeable, honest and quickly diagnosed my unit and got it working. It was a simple fix, I just needed a new receiver and remote at a cost of $369. Even though my model is older and discontinued he came prepared with all the parts on his truck. I highly recommend using Mr. Chimney and steering clear of FlueTech.

Description of Work
Gas fireplace repair, they were INCOMPETENT or possibly dishonest

We feel this review is very unfair. We attempted to service the clients fireplace however as stated in the clients review, the fireplace was discontinued as was the majority of the replacement parts for it. We did our best to troubleshoot nevertheless and track down the parts we felt would be required for the repair but we were unsuccessful. We initially informed client prior to the visit there would be a service fee of $190 to service the unit however we could not guarantee we would be able to complete the repair and the client agreed. As a result even though the client gave us her CC payment details as a good faith gesture we informed the client we would not be putting the charge through. To the contrary we believe we were very honest with this client and its unfortunate the client does not feel the same.
4.0

I contacted Flue Tech to fix the pilot-less feature on my gas logs. I did not use them because I was able to find someone nearer to my location.

I would highly recommend them if you need to get work done. Mike @FlueTech provided exceptional service.

Excellent company. Highly recommend. Very accommodating . Came next day. Honest, friendly . Went above and beyond expectations. Will definitely use again! Thank you!

Description of Work
Gas fireplace log had all black stuff on them. Also the back brick wall as well.