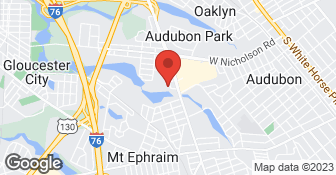 Swim-Mor Pools and Spas is a family owned and operated company started in 1967. We specialize in new concrete (gunite) pool construction as well as existing pool renovations and modernization's. We have 3 retail and sales locations covering all of Southern and Central New Jersey as well as New Castle County Delaware....

We were just a little bit disappointed in the fact that they took awhile to come out. They told us that they were coming and they did not. It kind of messed up a little our work schedules, and it was not due to weather. They were just busy and I guess could not keep up with their schedule. The work turned out beautiful and in the end, we just loved it. That it just one of the consequences, it was hard for them to meet the schedule they did and work around it. Their price was a little bit more than some of the other people, but we went with them because of the reviews that they were able to do, and they are a very reputable company. They did an excellent job. They were pretty professional. They just did not get here when they said they would.

Description of Work
Swim-Mor Pools and Spas had to re-do the entire pool.

After Mike McCool finished yelling at me on the phone (Tuesday 6/19/12) telling me that I'm "just going to have to live with it", I responded with, The contract says the shallow end is 4', it's not, what are you going to do to fix it? He said he'll have to get back to me. This past Wednesday 6/20/12, I got a call from him saying his construction manager would be out to measure again. Late Thursday I get a call saying they weren't coming Thursday, they'd be there friday. Friday, the construction manager showed up. I have 6" square paper cutouts representing the tile, with the lower half blue representing water, and wanted to review with him, my understanding of where we are and what we might be able to do. He responded with "I was sent here to measure the pool, that's what I'm doing", and had no interest in discussing anything further. They have obviously messed things up and seem to be in no hurry to fix them. I would highly recommend NEVER doing business with this company. The have created a mess, the construction manager admitted they "missed", and to this point are not owning up to it. The summer is wasting away, their professionalism is far from acceptable, and their desire to right what they made wrong shows no signs of urgency. UPDATE 6/26/2012: I received a call today from Mike McCool. He has told me the following: On Friday, 6/29/2012, Swim-mor will be out to dig out the shallow end of our pool, remove the rebar, dig it deeper to 4' for the whole shallow end, and re-gunite the removed section, which will make the pool exactly as ordered. Lifetime structural warranty remains in effect. If this indeed happens as it's been explained, my ratings of Swim-mor will be changed dramatically for the better, as it's a clear indication to me that they have admitted their mistake, but owned up to it to make it right. It takes a good company to right a wrong like this, because I know the cost and effort is not a trivial one. I am well pleased at the progress made today. More to come! Hopefully all on a positive note!

Description of Work
We contracted with Swim-mor to build a pool that was 3 1/2' off the bottom step, four feet thorough-out the shallow end and 7 1/2' in the deep end. On the day of the dig, we reviewed these terms (which are on the contract) with the construction manager. The concrete shell they have poured is just over 3' at the step, 3' 4", at one part of the shallow end and not quite 4' before it drops rapidly to the 7 1/2'. Nowhere in the shallow end is there 4' of water. The whole purpose of contracting with this company was to get a custom design that met our requirements. We wanted two things: 1) a pool that was an even 4' in the shallow end, and 2) a deep end where the kids could jump in without us worrying about hitting bottom. No diving due to the obvious risks with that. The salesman designed the pool to meet our requirements. 4' in the shallow end, with volleyball posts that will span the net across the shallow end, 7 1/2 deep in the deep end. What's been created is something completely different. I've contacted Mike McCool from Swim-mor, who after his construction manager came back out and measured, has told me by yelling at me on the phone, "you're just going to have to live with it". When the construction manager was here taking measurements prior to that conversation with Mike McCool, I asked him "What happened here, this isn't what I ordered or what I paid for". His exact words were "We missed". So, obviously the construction manager agreed and understood that what was done wasn't what we agreed to or what I ordered, yet the pool company, so far is not willing to make it right. Given the cost of the pool, a final product that doesn’t meet the 4’ specification is unacceptable.

Specializing in SWIMMING POOL REPAIR AND SERVICE! We always guarantee your satisfaction and won’t leave until the job is done right. We take pride in ourselves and on the quality work we provide, while always delivering great customer service! Check out our services offered, then call --or-- click to schedule a free estimate today!  …

Legacy Pools and Patios specializes in all making your outdoor living space your favorite vacation spot. Years of experience in: OPENINGS / CLOSINGS ABOVE GROUND & INGROUND LINERS SALT SYSTEMS AUTOMATION PUMPS + FILTERS ABOVE GROUND SALES Our service techs are the most knowledgeable and friendliest around. Fully licensed and Insured.  …

FREE 3D Design Consultation for Angie's List Members Call Now! For over 70 years, Anthony & Sylvan has been your trusted swimming pool builder. Our experienced design consultants understand the area’s climate and terrain and can help build the pool of your dreams or turn your backyard into the retreat that it once was. Whether it’s a natural rock waterfall, a hydrotherapy spa or free-form pool, we are so confident in the quality of our work that we offer the Anthony & Sylvan Lifetime Structural Warranty with each pool and spa we build. Arrange for a free, no-obligation consultation and estimate today. Don’t forget! Anthony & Sylvan can also help you maintain your beautiful oasis with regular pool service, or visit our retail store for all of your pool supply needs.  …

How is Swim-Mor Pools and Spas overall rated?

Swim-Mor Pools and Spas is currently rated 3 overall out of 5.

What days are Swim-Mor Pools and Spas open?

Swim-Mor Pools and Spas is open:

No, Swim-Mor Pools and Spas does not offer eco-friendly accreditations.

Does Swim-Mor Pools and Spas offer a senior discount?

No, Swim-Mor Pools and Spas does not offer a senior discount.

Are warranties offered by Swim-Mor Pools and Spas?

What services does Swim-Mor Pools and Spas offer?