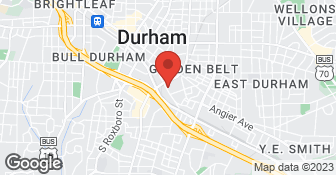 ServiceMaster Restoration Cleaning Inc. of Durham will properly restore any property after a disaster occurs. Whether it's damage caused by fire, water, mold, or another element, our team of technicians will properly clean, dry, and restore your belongings and property. Also being licensed contractors, ServiceMaster can fix and replace damaged walls, flooring, etc. We do it all so you can get back to your normal life with minimal hassle and disruption. ServiceMaster Restoration Cleaning of Durham is always available when you need us

They were quite good and we got them off Angie's List. It took them about 2-1/2 hours to do the job. They did a good job. They showed up on time.

Description of Work
I used ServiceMaster to dry clean the carpets.

Description of Work
Servicemaster did clean up work after a severe plumbing leak. They did deconstruction after it was determined that all the floors needed to come up and and the bottom two or three feet of the drywall of the interior needed to be removed. The deconstruction went OK but not great. They often didn't have the necessary equipment and had to wait or rent equipment to do the job. The worst part of the experience was when they subcontracted another company to replace damaged HVAC vents in the crawl space of the house. That work was worse than sloppy and did not meet a great number of code requirements. My insurance company rightly refused to pay for that HVAC work and I had my own local HVAC company come back, rip out the out of code vent work, and do it right. The city inspector thought my local HVAC company did a great job and was amazed at what Servicemaster's subcontractor tried to get away with.

We called ServiceMaster to remediate the mold in our sun basement. ServiceMaster was recommended to me by my doctor whose entire house was being remediated by this company. They came and investigated our basement and said they would get a bid to us in a week ... then in 2 more weeks ... then definitely by the next Wednesday. Then, apologies, certainly by the next Monday. Eventually, a bid was placed that was twice the "ball park" figure quoted to us originally. After checking with my doctor, it seems they were 5 months behind on her project - she and her entire family had relocated to an apartment - and they had then come back with new prices that were much higher than the original bid. She was in the process of firing them. From April to July all that had been accomplished was for the carpet to be ripped out and an additional charge of $3,000. to move their furniture to a storage unit. This company is unprofessional and does not follow through on projects. I would not recommend them to anyone.

Description of Work
ServiceMaster came to evaluate our basement for mold remediation after testing came back positive for mold.

I could not be happier that I called ServiceMaster Restoration Cleaning. I recently had a leak from a neighbor's unit come into my place - it was relatively small in terms of the area affected, but having never dealt with something like that before, one of the first things I did was call for assistance. The woman I spoke with arranged for someone to be out within a few hours (and I had the definite impression it could have been even faster if I had requested it - but I didn't feel that was necessary because it was a pretty small area - a strange configuration in my unit helped keep it confined - and the leak had been stopped). Ryan came to do an assessment and was extremely nice, efficient, and thorough. He inspected the full area and then did moisture testing in several locations. Thankfully, he said the damage was pretty much the best kind you could "hope" for in that situation - things were in reasonably good shape. He did say it was important to head off any possible problems (such as mold) by drying out the area - somewhat of a challenge in my place because of a lack of ventilation. Even though it didn't look like any immediate services beyond that would be needed, he was kind enough to have a couple colleagues swing by right then with some spare industrial fans. That's spare as in zero charge for using them. Really. After a few days of drying time, Ryan came out again to do follow-up testing and make sure things were progressing correctly. The fans had worked well and most of the moisture levels were well within an acceptable range. I gave back two of the fans and kept two others to finish the drying. Again, no charge and I just dropped them off at the conveniently located office later. By that point it was clear that no major services would be needed from his company, but he answered numerous questions about what I might need to have done to be as safe as possible (including a drywall task I could do myself or ask a handyman to do), gave input on what to ask a specialty contractor to do regarding some insulation material that was damaged, and gave me some helpful general information regarding a couple questions I had to do with insurance issues. I know I asked several of the questions multiple times just to make myself feel better, and he was really patient, clear, and helpful. Ryan spent probably an hour total across 2 visits inspecting things, setting up the fans, and answering my questions. My fingers are crossed that nothing like this will happen again, but if something does happen down the road water damage-wise that requires greater action, I will certainly call this company again. Very responsive, very professional, generous, and just all-around nice to deal with. Highly recommended.

Description of Work
Ryan performed a visual inspection, discussed the possible effects on the various materials involved, and did moisture testing (before and after fans were put in place). Company provided industrial fans and set them up (in some inconvenient locations). Ryan answered LOTS of questions and gave detailed advice on next steps.

The best thing about working with them was Caleb and Greg's tenacious resolve to address every situation. In this project there were unexpected problems and setbacks. There were issues for sure that we both leanred some lessons from and resolving the problems took longer than either of us wanted or expected. That is somewhat due to the nature of this work though. Greg took responibility and made things right in the end which is exactly what we needed.

Description of Work
They performed water damage remediation and mold remediation in my home. This included creating containment barriers with negative air pressure, material removal, dehumidification, and treatment. They worked closely with us to select effective treatment chemicals that were natural and non-toxic. They went beyond the normal responsibilities making sure we were taken care of completely.

We specialize in all phases basement waterproofing and more! We guarantee your satisfaction, and we won’t leave until the job is done right. We pride ourselves on the quality work we provide, while delivering great customer service! Check out all the services we offer below and call -or- click to schedule a free estimate today!  …

We specialize in cleaning and disinfecting services, for residential and commercial properties! We guarantee your satisfaction, and we won’t leave until the job is done right. We pride ourselves on the quality work we provide, while delivering great customer service! Check out all the services we offer below and call -or- click to schedule a free estimate today!  …

How is ServiceMaster overall rated?

ServiceMaster is currently rated 3.6 overall out of 5.

What days are ServiceMaster open?

What payment options does ServiceMaster provide

No, ServiceMaster does not offer eco-friendly accreditations.

Does ServiceMaster offer a senior discount?

No, ServiceMaster does not offer a senior discount.

Are warranties offered by ServiceMaster?

What services does ServiceMaster offer?