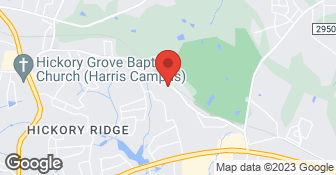 Jim Dickerson Company, Plumbing, Electrical, Heating & Air is a family owned and operated company serving the Charlotte and surrounding areas. Jim, a Charlotte native, learned the plumbing trade from his father-in-law, Chester H. Creed, and worked with him for many years before starting his own company. Jim, along with his wife Judy, formed Jim Dickerson Plumbing in 1977. What began as a one truck operation has grown steadily over the years, and today we have a fleet of over 20 service vans. In 2005, we moved to our current 11,000 square foot location. This facility includes a 7,000 square foot warehouse that allows us to stock many commonly used parts, water heaters, and fixtures which helps us in providing prompt service. Jim's daughters, Debbie and Angie, decided after college to join the company and they currently manage the day-to-day operations of the office, including Customer Service, Sales and Marketing, and Accounting. If you have a plumbing or electrical question or would like to schedule a service call, please call us and experience first-hand our warm, friendly customer service. No subs. Charges hourly rate. Extra charge for after hours services. License # 07746. May contact through e-mail. *2014 Super Service Award Winner*...

Water heater was replaced in a timely and efficient manner, I was given information on the unit.

It was fine. They were prompt, confidently handled the job, and no issues at all. I highly recommend them.

Description of Work
They fixed the toilet.

Trip and Bobby installed 6 Amazon Ring floodlight cameras for us. Trip is especially knowledgeable about these cameras, and Ring security products generally, and was extremely helpful. They did a terrific, cost effective, job for us and we highly recommend them, and Jim Dickerson Co!

It took a little longer than I expected, but nicely done.

Brandon called me prior to heading to my house, this was agreed upon prior. Quickly assessed the problem, proposed the solution and cost. Work was performed as expected, price matched the verbal quote. Hope to not need again, however if I do I would use again.

They came out on a weekend and made the necessary repairs quickly and professionally.

Description of Work
leaking valve on main line into house.

Insane pricing. Over three times the cost of other quotes.

The work was very simple. The plumber arrived as scheduled, and orally quoted different elements that could enter into the final bill. All the folks are very pleasant. He set to work and appeared to complete the tasks well. After the work was performed, a final bill was presented which failed to state each element, but summarized a total bill and did not match up to the oral statements. I noted my concerns to the company, but there was little that could be accomplished except to try to justify the bill after the fact. A second plumber was dispatched to fix a leak left behind by the first plumber.

Had painters at the house for exterior painting. They wanted to use exterior outlet, but no power. Called Jim Dickerson company at about 11AM asking for electrician service. After checking, person on the phone said how about 1PM to 3PM that day! I said yes and heard from the electrician Nathan that he would be there at 1PM, depending upon traffic. He arrived as stated, and replaced the GFCI breaker, but outlets not working. He then replaced outdoor outlets (40years old) as well as new outlet covers, but still not working. Then replaced duplex outlets in three bathrooms, but still not working. He then got another GFCI breaker from the truck, installed it, and everything had power. Turns out the "new" breaker from the manufacturer was faulty! Cost me much more for labor time, but not the electrician's fault. Their company gets a refund for the faulty breaker, but I get no refund for the labor time charge from the manufacturer, who caused the problem. Probably another product made in China!

Very smoothly. They got out to the house quickly and fixed the problem the same day.

Description of Work
Check on A/C unit that stopped cooling

They were very professional, on time and gave the estimate on time, unfortunately we didn't have them perform the work as the customer did the work himself.

Not well, very bad grabby greedy impression over the phone. As if they are doing a favor not doing a service

Description of Work
Operator indicated to replace a shower head, additional costs in addition to a $55 assessment would be charged. If a competent pumper couldn’t not change the shower head for $55.00 they would not be, competent. So not a good simple repair experience. Very bad impression.

There Tec Daniel was on time & courteous ,Priced out Job Per Hour and was spot on, Sink looks good works well ,Will Call Them For any other Work when needed

The technician was professional and on time. He was here only for 5 mins. The garbage disposal was little jam since I was out of country for 4 weeks, didn’t replace the disposal but I was charged $198 which is very expensive. I had the same experience before with this company. I tried couple of other companies before I called Jim Dickerson. The other companies were very busy so I had no option but called Jim Dickerson. I won’t call Jim Dickerson again since they are very expensive.

Description of Work
Garbage disposal was not working

Quick and professional, as they always are. Always a reliable company, for both plumbing and electrical work.

Work was excellent. Just the pricing was high. What seemed to be a simple repair ended up costing several hundred dollars.

Representative arrived Monday (March 13) to determine what the problem was. (I had smelled sewer gas when washing a load of clothes on Sunday). After determining a pipe was broken under my home, a repair was scheduled for Tuesday morning (March 14). The repairman arrived on time, made the repair, tested to make sure there was no leakage after repair, and the job was complete within 1 1/2 hours.

Description of Work
Repair broken pipe under my house.

On the day before Super Bowl, our drains started showing symptoms of a sewer blockage. I submitted a request by web for a diagnostic check the following week, no rush. But on Super Bowl Sunday, the sewer completely shut down. Left a voicemail saying forget the "no rush" part, I needed help ASAP. Later that day Debbie responded that she would have somebody there the next day. By noon Monday, Offir had determined the approximate area of the problem, and called in Jeff to find exact location. My mid-afternoon, Jeff and done that and requested Locator service for pre-digging. By late Monday, all 811 locator folks had finished marking utilities. Clayton & Cooper arrived 9am Tuesday, and were mostly done by early afternoon. There was a minor glitch, and twice additional Dickerson trucks arrived to help fix this problem. By mid-afternoon, all was fixed.

Jim was one of the only plumbers not to charge to provide a quote. He provided a quote the same day that I called. He was professional and polite, and knew exactly how to make the repair. His quote was very reasonable (as I had obtained quotes from other plumbing services), and his team completed the work within 2 days. Overall I'm very satisfied, and I highly recommend Jim Dickerson Plumbing.

Description of Work
Installed new waterline from meter to my house

although they were late and did not communicate in a timely manner, when they arrived they went right to work and did all what was expected and even made good suggestions.

Brian Robeson did a fantastic job! He is extremely knowledgeable, very efficient worker. He explained exactly what was wrong and what needed to be done to fix it. He did his work in a timely fashion. He is very trustworthy. I highly recommend this company.

Great. Plumber arrived on time and worked diligently until work was completed. Cleaned up after they were done. Rate was reasonable.

They are extremely professional, friendly and knowledgeable. Everyone we dealt with made this a very positive experience. Jason was wonderful. We highly recommend them and will use then again. Excellent experience.

No problems scheduling visits for their technicians to walk through. Responsive and professional impression. Plumbing quoted high. HVAC and Electrical teams never came up with an offer despite numerous follow-up.

Fabulous. Brian Robeson was my plumber and he was excellent!!!!! He was very knowledgeable, thoughtful and helpful. When running into roadblocks, Brian came up with solutions and always kept the customer in mind. He is great and I will request him in the future.

We have the experience and dedication to get the job done right! Specializing in Remodeling services; We guarantee your satisfaction, and we won't leave until the job is done right. We pride ourselves on the quality work we provide, while delivering great customer service! Call or click for your FREE estimate today!  …

No, Jim Dickerson Co Plumbing Electrical HVAC does not offer a senior discount.

Are there any services Jim Dickerson Co Plumbing Electrical HVAC does not offer?