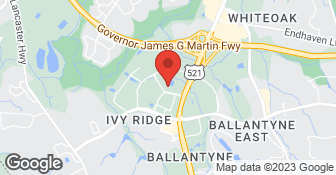 Acadia Shutters specializes in the design and professional installation of Custom Plantation Shutters, Shades, and Window Blinds for homeowners & businesses throughout Metro Charlotte. For over 18 years, Acadia Shutters has been committed to bringing customers exceptional service while keeping prices highly competitive. As a 12-time recipient of the Angie's List Super Service Award, 8-time "Best of Houzz" winner, NextDoor Neighborhood Favorite, and with more 5-star reviews than any local competitor, we're proud to be Metro Charlotte's #1 Trusted and Highest Reviewed Window Treatment Experts. ...

Charles M. came to our home in late June and helped me select the shades and measured for them. He was very helpful, polite, and professional. About 6 weeks later we arranged an installation time, but had to change it due to a medical issue that had to be dealt with quickly so the office did get a half days' notice and the lady who rescheduled the appointment was very nice and accommodating. A week later Clay arrived to install the shades. He installed them quickly and they look great! Clay was polite and professional too. The colors which Charles helped me select are perfect for the areas! If I ever need shades or blinds again, I would hire them again! Even though it was a relatively small project, they treated us as if it were a much bigger one. Good product and good people with whom to work!

Description of Work
We purchased 3 shades for transom windows and 2 roller shades for French door.

Dear [Member Name Removed] - Thank you so much for your feedback and for your kind words! We are truly happy to hear that you had a wonderful experience with both Charles and Clay and that you're enjoying your new roller shades and cellular shades!
5.0

We had a great experience with Amanda from initial quote to install of our plantation shutters. Everything ran smoothly and on time. Jeff was very efficient and professional and did an amazing job with installation. We were told install would take around five hours and it was completed in half the time. Our plantation shutters look great and would definitely recommend Acadia to family and friends.

My experience with Acadia has been great so far. Amanda was very helpful and responsive throughout both the sales process and beyond. When a shutter came in with some off measurements, she quickly took action to resolve. Jeff has also been super nice along the way with each installation. Prices were reasonable but it’s their personable customer service that actually prompted me to refer them others.

Description of Work
Shutters for all windows

We had plantation shutters built and installed in our master bedroom and sun room. The shutters are gorgeous and the installation was quick and professional. We worked with Amanda Zimmerman to choose our shutter style and color, and then they were installed by Jeff Topinka. First class experience all the way! We are so happy with the results and recommend Arcadia without reservation!

Better than we could have asked for! We are so fortunate to have found Acadia Shutters on Yelp and trusted the reviews! Before calling them, however, my husband found Budget Blinds and said they looked pretty good and I should give them a call. I did, and the person that answered explained they were incredibly busy and a designer would return my call the following day, would that be okay? I agreed it would be and thanked her for telling me about the delay. The next day came and went without any follow up. The day after I called again and gave my name, explained the situation, which seemed to embarrass her slightly and she promised a call back that or the following day. Both days came and went without a call. I gave up and immediately went to plan B, which was Acadia Shutters and Blinds. Amanda answered my call and was quickly engaged in the project; she offered ideas I had not even considered. I was eager to make an appointment, and unlike Budget Blinds, she could see me that same day. Because we had worked through a tentative scope over the phone, Amanda arrived fully prepared with samples of what we discussed and some alternatives. This experience is what it feels like to work with a professional that listens to what the customer wants but is confident in her skills and thinks about the "what if." She put effort into pushing the creative side....just in case I wanted to go there and I appreciated that. I made my selection in a relatively short period primarily because of the pre-work that took place over the phone and her arriving prepared with materials in hand. Lest I forget, the plantation shutter order she earned was due to a significant service miss on Home Depot's (South Boulevard) part. We ordered them two months prior, and they never placed the order because of a paperwork issue. Instead of following up with us, they canceled the order without us knowing. We were sitting in a fishbowl (no window treatments on the back of our house) waiting for....uh...nothing to arrive. We are thankful Amanda and Acadia put production in motion quickly! They arrived ON TIME, and we received a call letting us know the installer would contact us to set up a time for service. As promised he did, called before he arrived (ON TIME), and was incredibly friendly and professional. He explained how to work the mechanics of the panels, including cleaning them, do's and don'ts. He also left a small container of touch-up paint....oh how I love this company! The plantation and cafe shutters turned out perfect as well as the custom panels on the slider. We were a little worried about what to do with the sliding glass door because we did not want this large window to look dated, but it turned out WOW! It may be my favorite window in the house. In closing, I cannot say Acadia will never make a mistake, but I will bet that if they ever, ever do, they have the skills and service DNA to correct it quickly and earn your trust to do business with them again and again. If like me, you do business with them and have zero defects, you will refer your friends, and everyone that you hear is looking for window coverings. THAT is how exceptional companies stay in business, sell more product, create more jobs, hire and retain the best people (Amanda) and have the highest profit margin compared to their peer group. I can repeat it...We are so fortunate to have found Acadia Shutters on Yelp and trusted the reviews!

Everything went smoothly except there was some delay in installation of the blinds because one of their installers quit and he had our blinds. When I let them know I was still waiting, they quickly set up another appointment for installation.

Everything went great. Install was quick, easy and professional and the product is very nice. Price was reasonable. I would hire them again.

Jeremy was wonderful to work with! He came out (right on time!) and made it easy --- reviewed options, took measurements, presented a quick/easy quote.... and all with no pressure at all! He's a really pleasant guy... I actually had forgotten about a couple windows we wanted included in our quote and he was gracious enough to come back out a second time to measure those additional windows and quote the whole package. After comparing some quotes, we decided Jeremy and Acadia presented the best deal and had an excellent reputation. Shutters delivered right on time, as promised, and they all fit perfectly. Cedric (the installer) was punctual and made a quick (but quality) job of installing 15 windows of shutters. (Also nice they included a small container of touch-up paint). And to finish it all off, Jeremy has been good to follow-up after install to ensure we were pleased. We would definitely recommend Acadia to anyone looking for high quality plantation shutters!

Excellent customer service. Installer was very professional and respectful. Rodger Shade the salesman for Acadia shutters was very knowledgeable and helpful. I will definitely use Acadia shutters again.

I had Amanda as my Sales Consultant. She did a great job at explaining all options for a few rooms in my home. She was very responsive via email with any questions I had on my order. She kept me informed throughout the process from order to installation. Cedric and Jeff also did a great job at installing my shades and shutters. They were efficient and ahead of schedule. I will continue to use Acadia and Amanda as my consultant for the remainder of my window projects.

Our mission is risk free home improvement. A quality outcome is the result of a rigorous process. TruGuard has designed, staffed, and implemented the most thorough and careful processes in the industry. From our initial call to the completion of your project, we have a process in place that will simplify your experience and make sure you’re happy with the renovation. Also, a TruGuard relationship doesn’t end when our crew leaves. Every TruGuard project comes with a manufacturer and workmanship warranty for peace of mind.  …

We are an Exterior Home Improvement company. We specialize in replacement products that include but are not limited to replacement windows, replacement siding, roofing, gutters and gutter protection. Our main focus is offering only the best products, along with the best possible installation experience at the absolute best price. We are an owner operated business with over 40 years of experience in the home improvement industry. We stand behind not only our products but also our install with am unmatched warranty on parts and labor.  …

In 2001, owner Shawn Kalgren decided to make a career change that would ultimately set a new standard in the home renovation industry. He left the North Carolina school system to pursue a different type of service, Southern Home Services. Using his teaching skills in combination with his 15 years of home renovation experience, Shawn created a company whose values and principles are reflected by it's "A+" craftsmanship and exemplary customer satisfaction. At Southern Home Services, "Exterior Renovation perfected by Superior Dedication" is not only our motto, but our pledge to every project we undertake and to every customer that puts their confidence in us. We can do this by bringing educational experience and trade expertise to the table so no customer is uninformed and no detail is overlooked. This is why Southern Home Services won't be seen on television or heard on the radio, their customers do their advertising for them. We are an Elite Preferred James Hardie Remodeler.  …

Acadia Shutters Inc is currently rated 4.9 overall out of 5.

No, Acadia Shutters Inc does not offer a senior discount.

Are there any services Acadia Shutters Inc does not offer?