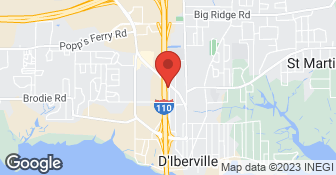 Specializing in A/C and Radiators...

First off, here's a little back story on what happened. I have an '09 Acura TSX that had recently started blowing regular uncooled air regardless of what temperature it was set on. I realized that if I hit the AC button a few times, usually it would begin working, which led me to believe that it wasn't a problem with the compressor or a coolant leak anywhere, but something a little cheaper to fix such as a switch. I brought the car into the Acura dealership in Mobile where I bought the car from and had them take a look at it. The diagnosis they came up with was crazy, and ended up costing me $100 for them to tell me I would have to pay $1000 to get everything fixed. I didn't get the work done, but I had got in touch with TJ at D'Iberville Auto Air and he was filled in on the situation. He asked for me to bring the car in so he could take a quick look at it and see if he could notice anything right off the bat. I did so, and once under the hood, he wiggled the A/C relay and the compressor kicked on. He took the relay out and messed with it a little more, and came to the conclusion that the problem seemed to be with the relay itself, and suggested that I go to either NAPA or Advance and pick up a new relay. I asked him how much I owed him for his services and he said nothing at all. I went and picked up the relay, put it in, and a week later my A/C is still running every time I turn it on. A supposed $1000 problem fixed with an $18 part. If not for TJ, I may have ended up spending the $1000 Acura was asking for. Needless to say, any A/C problems I have from here on out are going straight to TJ and his guys, and I will recommend them to anyone. It's nice to know that there are people out there who aren't out to rip you of your hard earned money, but instead are honest in their field of work, and I saw this at D'Iberville Auto Air. Very little that needed to be done from their end, but enough to make me a long time customer.

Excellent. They were prompt, professional, very accommodating and performed all needed repairs within their initial estimated price. I highly recommend them to anyone needing auto A/C work.

My A/C wasn't blowing out the dash vents, I trouble-shot it as best I could and figured that a vacuum line lost suction somewhere. Instead of me doing more damage, I looked for a repair shop. After calling a few local places, none of them could see me same-day or within a few days. All of them recommended Auto Air of D'iberville. I gave it a shot. Everyone was very nice and accomodating. The owner troubleshot, and repaired my truck very quickly and accurately. Based on my experience, I highly recommend Auto Air!

Comforts on the Coast

Air Conditioning service on the Mississippi Gulf Coast. We offer a variety of services such as Air Conditioning installation and repairs, Whole House Water Filtration Systems, and Water Heater installation. We are a Trane Comfort Specialist and our system installations are backed by Trane's 100% Performance Guarantee as well as our in house 10-year warranty. We service all brands of equipment and would be glad to have you as a customer. We pride ourselves on our ability to treat our customers with respect and dignity because amazing customer service quality is our #1 priority. Throughout the years of being in this industry, we have mastered our craft and we know exactly how to meet even the highest expectations of the people we work with. Give us a call today!  …

My company is small, I have no employees, but I try to take pride in each and every project as if it were my home. I have a couple of people that are skilled in A/C and electric work that I use on large projects. I didn't list specific licenses and where they are from because I have local licenses from just about every city and county along the Mississippi coast.  …

Insured
All statements concerning insurance, licenses, and bonds are informational only, and are self-reported. Since insurance, licenses and bonds can expire and can be cancelled, homeowners should always check such information for themselves.To find more licensing information for your state, visit our Find Licensing Requirements page.
General Information
Free Estimates
Ask for Details
Eco-Friendly Accreditations
No
Payment Options
Check, Visa, MasterCard, American Express, Discover
Senior Discount
No
Warranties
Ask for details

Stringer Auto Center is currently rated 4.8 overall out of 5.

No, Stringer Auto Center does not offer eco-friendly accreditations.

No, Stringer Auto Center does not offer a senior discount.

No, Stringer Auto Center does not offer warranties.