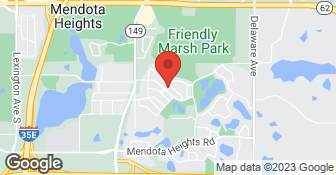 Great. Andrew fixed it promptly, and tested it a few times. The service was less expensive than the quoted estimate.

Description of Work
Fix a valve and repair a toilet

The plumber did not arrive until after the 2 hour window that we were given. When asked if it had been a busy day (thinking this was the delay in timing), he responded "no." He attempted to repair the faucet, but it was determined that a new faucet was necessary. He left to get the faucet and was gone for 45-50 minutes, even though we live about 1 mile from two separate large home improvement stores. When asked if it was difficult to find, again giving him the benefit of the doubt, he responded "no." Once he returned, the work was finished within 5 minutes. The work itself seemed to be fine, but the timeliness (especially when being charged for the time) was our main concern.

I called them via a family member recommendation when our kitchen sink started leaking. They were able to come out 2 days later to complete the install of the sink, which was wonderful. Very nice, prompt service tech and he did an excellent job.

Amazing! I was really impressed in the time frame, the quality, and price that the work was done. I will be using the company again for other services.

Nate was excellent--friendly, professional, efficient, and just a great person. He diagnosed and fixed the problem quickly and answered my many questions about other plumbing projects or issues that I wondered about. I highly recommend Janecky!

We had 2 shut-off valves in the basement that were not functioning. I was told by the city that we probably needed to hire a plumber that also did excavation to dig up the front yard and fix the shut off from the street before replacing the valves in the basement. That would have been a huge process because the city would have to shut off the water for every house in our neighborhood, and a huge expense. When I spoke with Dave Janecky he told me that they can just freeze the water line in the basement and replace the valves. No expensive excavation job, and no shutting off the water for the neighborhood. I had never heard of such a thing, but they were out here in under a week and the valves were both replaced in under 2 hours. I am thrilled with the job that was done!!! The guys were nice, polite, and cleaned up after themselves. Who can ask for anything more. I will not hesitate the hire Dave and his crew again in the future.

Description of Work
Replacing Shut-off Valves in the Basement

Nate did a great job assessing the issue and recommending a solution. Job was completed within an hour. Excellent customer service.

It went well. They moved the stacked washer/drier combo to the left in the small closet to allow better access. This made the soap/softener sliding drawer interfere with the door frame. I cut a small piece out of the door frame and everything works well. The new position is definitely the best.

I called Janecky Plumbing & Heating on Thursday, August 16th and was able to make an appointment for the following Monday for a non-emergency leak. Nate arrived that Monday within the two hour appointment window I was given. He was courteous, knowledgeable, and efficient. He explained a couple of options for fixing the leak. Despite having to make a trip to an outside vendor to buy a new sink/faucet, he still managed to get everything done in about an hour. The cost was in the ballpark of what I had anticipated. I was very pleased with this plumbing experience and will definitely use Janecky Plumbing & Heating in the future. I can highly recommend them to others given my experience.

Description of Work
Had a major leak from the kitchen sink; needed replacement sink and faucet & new piping underneath sink

Since the new countertops and sinks were installed on a Friday, we needed this work done on Saturday. It was done promptly and well. We're very happy with the results.

Description of Work
Installation of four faucets and a garbage disposal and connecting drains for four new sinks.

The services we provide include: Replacement and repair of hot water heaters, boilers, in-floor heat, baseboards, radiators, and furnaces. We also are able to clean household drains and repair water and gas leaks. We work with local contractors and home owners to help them with their plumbing and heating needs during their remodeling process, and can handle all maintenance and repairs.

Janecky Plumbing & Heating is currently rated 4.7 overall out of 5.

No, Janecky Plumbing & Heating does not offer a senior discount.

Janecky Plumbing & Heating offers the following services: The services we provide include: Replacement and repair of hot water heaters, boilers, in-floor heat, baseboards, radiators, and furnaces. We also are able to clean household drains and repair water and gas leaks. We work with local contractors and home owners to help them with their plumbing and heating needs during their remodeling process, and can handle all maintenance and repairs.