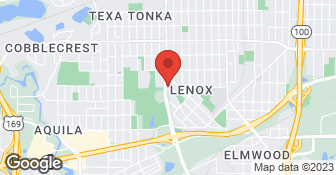 Horrible The experience was awful with this people. I didn't know this company at all, my insurance company send me a list of 5 general contractors to take care of my house, so I pick J Benson because they were close to my house and I want it to keep the contractor local and close. So I went with them. They send an estimator like one day after the damage of the house, I signed the paperwork and two days later they send a different person because the first guy had previews commitments, so that was the first red flag. The second estimator took a lot more pics of the house and did he's first estimate, he submitted to the adjuster and it passed just fine. But then it took them almost one whole month before any one started to work in my house, not a single nail was removed or anything. Then I found out that numerous contractors were going in and out of my house with out me knowing it. Finally the work started and the job "foreman" got involved, this guy was even worst, he only called and picked up the phone when he need it something for me other ways good luck trying to get a hold of him. This guy should be FIRED and never allowed to work on the field again. One day I called him and he's answer was "what do you need, I am kind of busy right now" Awesome. Then I asked for an estimate to build a brand new bathroom in the basement. The estimator give me he's quote and we agreed on the price, so they started the project about one month after the paperwork was signed. About 80% of the work was done when I found out that the estimator "FORGOT" to add the toilet and the tub on the estimate!!!!!! How can any one do that????? So I had to came up with that $$$ And then there was the communication with office personnel. Since day one right after I signed the paperwork I offer to give them money, the estimator said "some one from the office will contact you" NO one ever did, weeks went by with out a single person contacting me about money. Finally some one did and every time we communicated there was a mistake with the numbers, every time there was an "I am sorry I forgot" Unreal this people. A couple of weeks before the project was done and I was super upset with every one involved at this point I requested a supervisor. He reached out to me and we meet at my house. He right away start asking me for money, I pretty much lost my cool there and I went off about all of the issues I was having with he's people. He's answer " I am sorry I wasn't aware of the issues" This shows how unprofessional this company is I can't believe how this people are in business not only in the twin cities but in southern Minnesota.

Very professional. Had the entire job done in a day. Looks great. The crew was very polite. Second time we have used this company. Would use again.

Description of Work
Scrape and repair water damage on a ceiling

Description of Work
They were hired to re-roof our house, and to replace the gutters

Description of Work
J. Benson completed the restoration of my townhouse after flooding from a plumbing leak. Carpet restretched and cleaned, wall repairs and baseboard repositioning, and furniture repositioning.

Description of Work
This is an excellent place to contact if you want no work done. After recent hail storm I asked my insurance adjustor to recommend a preferred contractor for complete roof replacement and other storm damage work. On July 6 their estimator came and said I'd have a contract in the mail by 7/10. Contacted company on 7/14 and receptionist stated she sent out a lot contracts but had seen nothing about me. A/O today (7/22) still haven't heard from them. Will be going with a different contractor.

Description of Work
They fixed our basement ceiling which had water damage. They did a good job. Looks great and we don't feel like they overcharged.

Description of Work
Remove shingles, reshingle, partial remove and reside vinyl siding. From mid July to mid September. They had a backlog on the siding and it was special ordered.

A drunk driver crashed into our house in the middle of the night. JBenson arrived within 2 hours of having called them for emergency board up service the next day. They sent a crew of 4 (plus an electrician that arrived later). After reviewing the damage, they said they could just board it up or fix the structure. They removed all broken pieces to the structure, reframed the corner, placed sheeting and tyvek and cleaned up the glass around the site. Their electrician (a sub) ran a dummy line through the broken outlet so that we could turn the electricity back on to that part of the house. The cost listed above is an estimate based on the 5 hours of work. I have not yet seen the claim so I did not rate on cost. All of the team was very professional and courteous. We are waiting for a final bid to see if they come back to finalize the work.

Description of Work
Emergency services to repair house after a car hit it.

We had them twice. They are responsive and honest. Everybody was pretty good except for the painters. They are professionals.

Description of Work
I used the water damaged service and remodeling service of J. Benson Construction.

Quality of actual installation was acceptable. They could have done a better job of coordinating work. Delays with flooring delivery left us without access to one floor for over two weeks. Workers damaged appliances. It also took several weeks for them to bill us, which delayed our final payment from the insurance company.

Description of Work
Oversaw repairs caused by water damage. We were referred to them by insurance company. Cost was not an issue for us because it was covered by insurance.

After they picked up the dehumidifiers I didn't hear from them for nearly a month. They left a voicemail I returned their call within 30 minutes and got voicemail. After not hearing from them for 3 weeks I contacted my insurance agent and they contacted the service. I finally received a call back a few days later (a Tuesday) They promised to let me know when they would be out to do the work by that Friday. Friday came and went and still no call. This has been going on long enough I thought and my agent suggested I move on and find someone else. I was told by the service I would not be billed for anything. Then I found someone else to complete the repairs. Keep in mind by then it was early September and I have had my house in upheaval since the storm of June 21st. You can imagine my surprise when I eventually received a bill for the 1-2 hours their employee did work and it was for $1281. That comes out to over $640 per hour. They didn't supply and materials so that was a labor only charge. I have since filed a complaint with the Better Business Bureau of Minnesota.

Description of Work
Spent 1-2 hours removing the bottom 2 feet of sheetrock from basement drywall damaged by flooding. They also plugged in a couple dehumidifiers to run for a couple days. They didn't replace anything and provided no materials.

J. Benson was actually recommended by my insurance company. The conflict of interest concerned me, so I talked to two rental owners (one of whom I knew) and two homeowners for references. They were good, I signed the contract, and the J. Benson supervisor told me I would be satisfied with their work. Everything went well. Their subcontractors were cooperative. J. Benson knew about fire restorations, they worked cooperatively with me and my insurance adjuster. I came to trust J. Benson and the adjuster did also. As issues came up such as the quality of the replaced equipment or fixtures, or the detailing of a feature, the issues were resolved to my satisfaction (I was more involved in project oversight than the typical rental owner). At the end of the job, I was satisfied, just as promised. It is now 2 1/2 years later, the the restoration has held up. This review is tardy because I just didn't take the time; it should have been earlier.

Description of Work
Restored a fire-damaged apartment. Tenant had fallen asleep while smoking. Work included gutting the apartment to the studs (absolutely everything was removed, even the tub), removing asbestos tile, abating mold caused by fire department water, bringing apartment up to current codes, and rebuilding everything.

Description of Work
Our pond backed up into our septic. It fried the pump and the septic backed in to the house filling. The basement + 2 bedrooms with 6" on sewage + pond.

They were very personable. They came out to give us an estimate and they got it done rapidly. They sent out about 3-4 people to get the work done. They were prompt and complete with their work.

Description of Work
They did some repairs on the inside of the house. Repairs to the wall and ceiling since we had some damage due to water. They did drywall, painting and plastering.

I WISHED TO RECEIVE ESTIMATES TO REPAIR OR REPLACE A SECTION OF 12-YEAR-OLD TONGUE-IN-GROOVE CEDAR FENCE THAT HAD BEEN DAMAGED DURING REMOVAL TO GRANT ACCESS TO MY YARD. THE ESTIMATE TO REPLACE THE FENCE WAS $1500, WHICH MAY OR MAY NOT BE A GOOD PRICE; HOWEVER, I EXPRESSED MY PREFERENCE TO REPAIR THE FENCE, IF POSSIBLE. THE COMPANY RECOMMENDED AGAINST IT AND WOULD NOT PROVIDE ME WITH AN ESTIMATE. I FOUND A DIFFERENT COMPANY TO REPAIR THE FENCE FOR $300. IF THE REPAIR LASTS 5 YEARS, I THINK I MADE THE RIGHT CHOICE.

Franek Incorporated specializes in Decks & Porches and improving your outdoor living space. We also offer all types of concrete work including decorative and stamped. Whether you are considering a new home or remodeling your existing home, Franek Incorporated will exceed your expectations with lifestyle- friendly designs, quality craftsmanship and uncompromising customer service. We are experts in what we do and our employees are always eager to take on that next big project. Check out Franek Incorporated on Facebook for our latest photos: https://www.facebook.com/FranekIncorporated/  …

J. Benson Construction is currently rated 3.9 overall out of 5.

Are there any services J. Benson Construction does not offer?