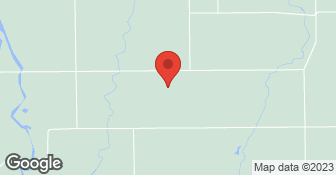 Brian went "above and beyond" when he came to the job site to access my husband's progress. Alan had corrected a lean by pulling the garage straight, and wanted Brian's advice on how high the stabilizing horizontal beams should be placed. Brian told him to give him 8" 1" clearance and to place the beams every 24" for strength. Brian gave us additional good advice for the good of our garage, which we're putting into practice. Because the car door opening was still imperfect, Brian compensated the best he could to make it appear straight. His installation of both car and entry doors were quality workmanship. We're grateful for his service!

Thank you for your review. I see that I received a B on punctuality, sometimes other jobs take longer than expected. But, it is something I'm trying to work on.
1.0

Beware - DO NOT USE GARAGE DOORS & MORE! In early July 2018 I contacted the owner and sole employee Brian of Garage Doors and More. We needed the side of our garage repaired to get it ready to replace the main garage door. Brian didnt make it out on the day he promised, said he was swamped but came the following day. He quoted $350-$500 for the repair which seemed fair. I liked Brian so much I told him we would like him to replace the door too. A $1500+ custom painted door. Everything seemed good, but went downhill from there. Brian scheduled and promised on three (3) occasions to come out and repair the garage. Three (3) times he failed to show up and three (3) times he failed to advise us that he wasn't going to show up. His excuse was always the same, he was so busy he couldn't make it out to our house in Kalamazoo. But he didnt even have the respect or decency to advise us. Three times we expected to come home and see the garage repaired. Three times we showed up and NOTHING was done. When I asked why we we treated so bad, he complained about not having any help. I'm sorry, if your business is that busy you should hire some help not blow off customers who trusted your word. I'd give a ZERO rating here but 1 is the lowest. Don't use Garage Doors and More. Totally unreliable.

Thank You for notifying me about the complaint. After seeing what this person has done I have no regrets. He filed a complaint with the BBB, Yelp, and the commented Quote "More to come" and Angie's List, and quote "More to come. I'll let you know if it goes on local TV". To this day If I would have done the work and for some reason they didn't like it or something went wrong, I can't imagine how far he would of gone. I would probably been in court. It also seemed odd that they didn't ask for a written estimate. Normally with this amount of work wouldn't you want something in writing. Unfortunately I told him the truth that I had a misfortune. The first time I had some unforeseen things come up that toke a lot of time and I didn't return most of my phone calls till evening. The second time I got mixed up in a real state scam that wound up with me calling the authorities. According to what he says about comments, yes I made two of them and the others I said I will try my best Or I hoping to get there on the other days. Let me go back to day 1 when I showed up and fixed the door so it would open easier. Letting him know that I see he did mention that. The whole time I was there no one came out to talk to me or ask questions. This hole arrangement has been long distance. After fixing the door I asked for no money up front. To this date I never asked for one dime. The only thing I did wrong is that I didn't show up to fix the garage. I didn't know that this was a crime. I see it all the time where contractors ask for a down payment and don't show up or even try to communicate with the customer. To this day I made a commitment didn't make it and I'm treated as if I'm a criminal. Majority of the people would have moved on thinking I wasn't interested in the job instead of trying to make a seen out of it. Really Quote BE WARE DO NOT USE GARAGE DOORS AND MORE because I didn't show up. I did no damage to they're garage and I asked for no money up front. Why didn't he put that in his complaint that he didn't have to pay me money up front and he didn't ask for a formal quote. To this day one of my old bosses stated it correctly, Quote "It only takes one old s**t to ruin a 100 at a boys. So far I have a 5 star rating with the BBB and 4.5 and higher with all the others out there with reviews. If you can't read between the lines on this one I would like to ask for a refund and take me out as a member with the BBB. I've been a member for several years and for as long as I've been in business you can't please everyone no matter how hard you try. With my other customers if they had an issue I made it up to them one way or another to make sure that when I left they were happy with my work and with me. I have found that many of those people Have referred me to there friends and family in the area. I take my work seriously. And for one of his last comments, he said that if I'm that busy I should hire some people. The BBB one of all of the organizations should know that it is getting harder and harder to find good help and people that want to work. Every trade in this area can't find enough good people to work the trades anymore. So in closing, I have admitted to my mistake and have seen what this person has said. Instead of trying to work out a solution he felt that it was more important to go out and bad mouth me on every media website out there and to try to but me on local tv for not showing up. I didn't try to take any bodies money or do bad work I just didn't show up. I understand He went to the BBB and made his complaint and if you have to publish it than go for it. I'm pretty sure most people will read all the good comments as well as that one. And I'm pretty sure all the people out there will know that you can't please everyone. So If he gave me 1 star I didn't totally fail.
4.0

Good job, good price. But missed a text message, so needed to call. But right there. Nice guy , felt safe

The owner had to reschedule once or twice because of other emergencies (mine was not an emergency), but he kept in good touch to find the next possible time that worked for both of us. The work was performed quickly and he gave a very thorough explanation of what he did, as well as what basic maintenance I could handle myself from thereon out.

It was fine. He was here on time, did the work, cleaned up the area.

I was initially looking to get my garage door replaced about a month or so back, I had contacted two other companies I found on Angies list, and I contacted Brian. I explained to him what the trouble was and my system was old worn out whatever. So I set up a time for him to come out which he did on a Saturday took at look at it said to me your springs and other components are in good shape all that needs to be done is these sensors, weather strip and a few other small things. I personally would have felt better if I had replaced it but budget constraints at the time with my sister going overseas for school and other things that had to be done around the house didn't allow for that. I'm glad he was honest with us about what needed to be done not just try to take our money and run, I felt he did a great job with that. On the day of the service it got pushed back because of vehicle difficulties he was having, he did come he fixed it in a timely manner and did good work. About 2 weeks or so after the service we had one small issue with the new strip coming undone so I called him up said thank you for fixing our door it's day and night difference in everything I just have a small issue that needs to be addressed. So we initially set up a date to come fix it, the day came he wasn't able to come take care of it, I had tried to get a hold of him after that I'm guessing he was either busy or whatever but he finally did get a hold of me a few days later and came out and fixed it. Overall I think responsiveness and I think professionalism in some ways could be a little better it was a little frustrating but that wouldn't stop me from hiring him in the future, very honest fair pricing and overall good work I'm satisfied with.

In a nutshell it went well.l.

Description of Work
rollers were changed and door was serviced. door is so much quieter when opening and closing.

He was prompt, friendly and helpful. We would hire him again

Description of Work
We had a garage door with a broken hinge. The repair cost less than the estimate and he noticed that our electronic door opener didn't work so he fixed that too at no extra charge.

went fine....He came out twice but the job was completed.

Was able to find problems and make adjustments. He did a good job and showed up on time. The appointment time had to be rescheduled and communication back and forth was very delayed to finally find a time he could come. This was due to family health issues he was dealing with at the time. I did try to overlook this when I gave this rating. He was really running behind in his appointments.

GARAGE DOORS & MORE LLC is currently rated 4.8 overall out of 5.

No, GARAGE DOORS & MORE LLC does not offer a senior discount.