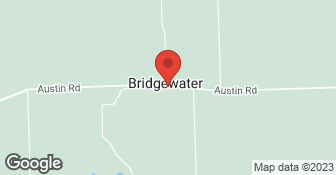 I have used Fletcher Inspections three times over the past nine years. Twice for homes in Michigan and most recently for a home in Ohio--yes, Fletcher can inspect in both states! Fletcher once saved me from buying a bad home--he found mold, carpenter ant damage, and water damage! In the two homes I purchased, with a clean bill of health, Fletcher thoroughly inspected the homes and wrote a very detailed and well documented (with many photographs) report. He also provided great advice on home maintenance. It's also great that the owner, Jeff Fletcher, peer teaches around the country--he and all his employees know their stuff! There is no one better!

Description of Work
inspection for purchase of a home

Great. Thomas was a very thorough and friendly inspector. He was patient and answered all of my questions as a first time homeowner. Would recommend him.

Description of Work
Septic inspection for house I sold.

Tom C. did an awesome job, he was really thorough and took his time to show us and explain different things. He didn't see any mold, so didn't do any of the testing but explained the radon tests and was very knowledgeable. I couldn't be happier with the service.

Kenny did a very thorough inspection of the home and provided us with a lot of helpful feedback and a comprehensive report. Far better inspection than we experienced during our last home buying process. Would highly recommend. Was also willing to schedule the inspection on very short notice.

Jason did an excellent job overall. He was punctual on that day and did the pest inspection beforehand. Then he inspected the whole house thoroughly. He had a lot of insight about different issues in the house and explained to me. He is pretty cautious about some potential issues and suggested us hire a contractor to further analyze. Overall, I am satisfied with his inspection.

Provider did a pretty thorough job of looking around and through the house, and formatted information pretty well, by both showing me all of the notes he had on potential issues with the house as well as photographing them and providing a pdf describing all the issues with photos. My problem has mainly to do with how his opinion of the severity of issues has panned out since the inspection about a year ago. Namely, the inspector insisted that none of the issues he'd described would require and quot;major repairsand quot; meaning repairs costing in excess of $1,000. However, Getting a new electric panel, which he'd said I should do and I did within the first couple months, cost over $1,000. Additionally, the molded-out hole in the ceiling of the garage, which he'd also mentioned as an issue to look at, was indicative of a leak in the roof I got fixed (along with the ceiling); only an isolated part of the roof had to be replaced, but all told that repair cost over $1,000 as well. Further, an issue that he pretty much glossed over is looking like it will cost me soon. The seller installed two skylights in the house, and this seems to have been done imperfectly, as the seal between the skylights and roof is not tight. As a result, the slight leaks around the skylights may force me to replace the whole roof soon (within a year from now) as opposed to when the roof would normally need replacing, not for another 5-10+ years at least. Given the poor job estimating the costs of repairs necessary for the home, I wouldn't recommend going with this provider.

Description of Work
Provider provided standard home inspection for a house I had under contract, the first home I had ever bought.

see the above description. it was a terrible result.

Description of Work
we were told this was a good company, but as i see in the other reviews, it turned out otherwise. this was a home inspection and our purchasing this home was contingent on a clean inspection. otherwise we did not want to buy this condo. this guy missed thousands of dollars worth of work that we had to do which the seller should have been responsible for. but because he failed to look in the usual places with any due care, he missed all the damage. a squishy feel to the floor near a doorwall should have told him the the subfloor was rotted. a large vase full of water under the kitchen pipes in the cabinet should have told him there was a leak and that leak extended to the subfloor and nearly to the ceiling in the condo below. and sticky floor tiles, self done job in the bathroom should have clued our inspector in to the leaks around the tub and also rotten subfloor. all in all, they found nothing. and we found it all upon closing. i would never hire these people again.

Had a great experience with our inspector. He was prompt, thorough and provided tons of insight into my questions. He found little repairs that were important and we were very happy with the entire experience!

Description of Work
Home inspection on a home build in the early 90s.

TERRIBLE. Jeff Fletcher performed the inspection of the home and found nothing wrong. We ended up buying the home and had to COMPLETELY GUT the home. There were numerous severe roof leaks that should have been obvious from the lack of flashing throughout the rooftop and many black water stains on the ceiling of the attic. The ceilings and walls were full of mold and mildew. In addition, there was an obvious issue with the overhead ceiling beam. Jeff Fletcher said it was cosmetic. The whole ceiling had to be removed because it was a major structural issue. We trusted his professional knowledge and boy were we taken... Jeff Fletcher drives around in a fancy truck advertising his inspection business - don't buy it: he hasn't a clue what he's doing.

Description of Work
Inspection of home we were considering for purchase.

General residential home inspections. We offer Radon Testing along with your Home Inspection as well. We offer quality service at an affordable price. Contact us today about an estimate!  …

We are a home inspection company that services most of lower Michigan. We offer residential inspections at all times of day and night to fit your ever-changing schedule. Call or text us today at 248-801-4001.  …

FLETCHER INSPECTIONS LLC is currently rated 4.4 overall out of 5.

No, FLETCHER INSPECTIONS LLC does not offer a senior discount.