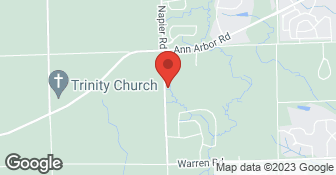 You get 24 years of experience at the best price possible . Call now for a free estimate....

Gary and his son Matt make a great team! We have been using their services for about 10 years now and every single issue has been handled quickly, professionally and at a very fair price. Gary has always responded immediately to my calls or texts. We have an older home and have needed a number of repairs and it's nice to have both of them on the service call. This time Matt did the work and he is every bit as professional and skilled as his dad. On the last call they worked together on a more complicated issue, and on the service call before that, Matt worked upstairs while Gary handled the first floor and basement issues and the job was completed in half the time expected. Both are friendly and professional and I would never call anyone else! Thanks for the great work Gary and Matt!

Gary and his son are outstanding. They showed up on time and explained the replacement process and toilet repair. They completed the job efficiently and the fee they charged was reasonable and fair. I will definitely use their services for all my plumbing needs going forward. I highly recommend them.

Description of Work
Gary gave me information over the phone that allowed me to fix my problem, all at no cost to me. Great service, I would recommend Gary for all your plumbing needs.

Another great experience with Gary's Plumbing! Our main sump pump died and fortunately the water backup system Gary installed for us a few years ago kicked in and saved the day. Gary came out today and replaced the main pump after we called this morning. As always Gary was responsive and professional. Another job well done at a very fair price!

Gary and his son Matt did an excellent job. I would definitely hire them again.

We had a backed up drain in our laundry/utility room floor. I spoke with Gary on the phone personally. He said it might be a broken sump pump and agreed to come out between 4-5pm same day to check things out. Asked me to text him our address, which I did immediately, and everything seemed peachy. Appointment time rolls around and passes without a word from him, so I reach out again. This time my husband answers the phone while I'm helping our toddler on the potty and Gary blatantly lies, saying he referred me to another company after I sent him pictures (which never happened). This man clearly has difficulty keeping his clients straight or just decided not to bother keeping our appointment and looked for an excuse. Do not waste your time like we did.

Description of Work
Backed up drain

no one ever called me back with an estimate. nor did anyone call to set up a date and time to see what needs to be done in order to provide an estimate.

Description of Work
I needed a gas line ran for a gas range. going from an electric range to a gas one.

I called [Member Name Removed] on Saturday we are running a couple day behind because of the high call volume. i apologized to [Member Name Removed] that i could not get to him sooner. It just my son and i doing the work so i can be on each job i choose to have no other employees so i know the jobs get done to my standards. i normally returns calls within 24 hours but i did not on this one.
5.0

It was all great. Gary and his son were right on time and got the work done so quietly and so fast I was in shock! And everything was done so beautifully...they perform great work. I would highly recommend them.

Description of Work
Remove old toilet and uncrate new one and install it.

Thank you [Member Name Removed] for the kind words
5.0

It went well. They had to cut a hole in my ceiling in my kitchen and they cleaned up so well that I didn’t have to clean any drywall dust up.

Description of Work
Replaced a leaking device in ceiling

They called me and requested pictures of the bathroom - I sent them and never heard from them again. I guess they are too busy or didn’t want the job, but I would have appreciated a follow up call. I scheduled another plumber today.

When i found this review i call [Member Name Removed] right a way that day to see what happen i left a message on his recorder to please call me. Meanwhile i check my phone log to see what happen here. I called a second time to tell him that either his message did not come through or i accidentally deleted his message when i clean out my messages from my phone. i called a third time got him on the phone and when he heard it was me he hung up on me. i tried to make this right with [Member Name Removed].
5.0

Gary's was very professional and did a great job. Installed toilets as working great and they removed to old ones.

very well. Gary and his son work in perfect unison. work was professionally completed in a timely way. I have had Gary install a toilet and a hot water tank- both jobs were executed with skill. This time the price was higher than anticipated and the workmanship was excellent.

Called Gary after reading the great reviews and was not disappointed. He was polite and professional, quickly splicing a copper pipe, fitting a valve and installing a new line to the floor above. I would absolutely hire him again.

Description of Work
Running a water line to refrigerator

It has been a pleasure working with Gary when we have needed plumbing related services over the years. During one visit, he and his son installed a couple master bathroom faucets. They were very thorough in making sure everything was set up correctly and passed my wife's stringent inspection. We also utilized their services for the replacement of our sump pump that was on its last legs. Gary suggested models to use and took care of the rest - without any issues, and he was cost-competitive. Garry has been very cordial, responsive and professional throughout all of our needs for his services. Would definitely use again and recommend to others - of which we have done.

Excellent. Gary was prompt and fixed the leak quick. We are considering using him for more work.

Great communication, by corresponding with pictures & texting. No need to call him back out for anything. All jobs were done right & in a timely manner the first time. Reasonable rates and highly recommended !

Description of Work
Gary & his son put in a new main house shut off valve. They also redid my drain piping for a new kicthen counter top, that I had installed. They also redid my bath tub plumbing, and installed a new faucet and drain assembly. Installed a new hot water heater. This work wasn't done all at once, but maybe over the last year or so.

He returned because the ice maker was still leaking but the experience is great and I would recommend to anyone and use them again.

Was on time.Actually was able to come early to do the work required. Had no problems from the repairs

Gary and his son arrived on time and finished all three toilets within about an hour. They were professional and friendly, and I'm fairly sure they left my bathrooms cleaner than they found them. They also either removed their shoes or wore shoe covers to walk around the house without my even bringing it up, which was quite nice. They replaced the rings on the toilets efficiently and neatly, and Gary emailed me a receipt within minutes of the job being finished - and there's a one-year warranty.

Description of Work
I needed the wax rings replaced on three toilets.

no issues, They were able to install the water heater same day I called. Clean and professional. While they were doing the work, I ask for a quote on another small unrelated project. Still waiting on the quote.

Gary was prompt, professional and efficient. He is highly recommended and we will be sure to contact him again with any plumbing issues. thanks Gary!

Description of Work
We needed our leaky hose spicket fixed and our toilet shut off replaced.