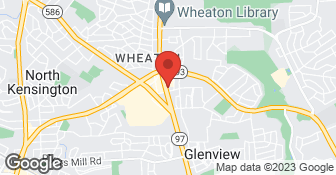 Locally owned sole proprietor specializing in high quality interior and exterior painting since 1985. We pay attention to every detail of your job....

Great! Carlos and his crew are all terrific to work with and really take their work, seriously. I would, and actually will, hire them again. Really, I don't really write many reviews but they were so unusually good, honest, and prepared that I felt I should write something this time.

Description of Work
painted interior and exterior of our house

Carlos and his crew are wonderful! They show up every day and work hard. They take pride in the work and pay close attention to detail. They transformed a 1920's era bungalow in desperate need of repair into a beautiful home that inspires neighbors to stop and say how nice it looks. The team was pleasant and cleaned up daily as well as at the conclusion of the project. The price was more than reasonable - it was a great value! I highly recommend Carlos Mosquera Painting.

Outstanding job by a solid team. We reviewed several quotes but what stood out from the start was the comprehensive and detailed scope of work given by Carlos Mosquera Painting. The work began on time and continued that way, without the common practice of workers being diverted to other places once the job is started, which often results in frustrating delays as contractors try to maximize multiple jobs. Carlos was always readily on call, and as the work developed and the inevitable minor changes were needed, he was always willing to make them as desired. The workers themselves were all courteous and friendly, which can make a difference when painting your home has so many strangers close up to your windows. The work itself was carefully and thoroughly accomplished at each stage. In particular, there was no skimping on the hard labor of scraping and sanding our large historic home, (in the summer heat) which provided a solid preparation, always key. Then one coat of primer to the entire structure followed by two coats of paint were applied by hand, with lines and edges sharp and defined. We are experienced DIY painters ourselves; but decided such a large job needed outside contractors. We were unaware of Carlos Mosquera Painting prior to this work and found them on Angie’s List. We would absolutely recommend his services to anyone.

Carlos's team was excellent. I did a lot of research before talking to him, to make sure I understood what steps needed to be taken, and Carlos was right on all of them. I think he was very knowledgable about what is required to paint or maintain a deck/wood/exterior. His team was excellent: very detail oriented and took the time to make sure the paint was fully removed and the deck sanded down before applying the stain (which is important to having the stain set). They were very careful and respectful of my home, and I would highly endorse him (and would hire again). The price was also very reasonable relative to other quotes I received.

Description of Work
Paint on deck was peeling. I needed the deck to be stripped, sanded, and stained.

Carlos' painters painted all of the stucco on the lower half of my American Foursquare. They did a great job and once I tried painting the upper portion myself and realized I couldn't do it myself I called him back and his guys finished the upper portion. Very professional and prompt, very kind man and easy to work with. Definitely recommend.

Carlos’ crew showed up on time and replaced rotted wood and painted the exterior trim on my house. Price was reasonable and the crew was professional. I will definitely hire again.

Description of Work
I needed my home’s exterior painted.

The job was well done and the price is very reasonable.

Carlos' team did an excellent job painting two rooms in our house. I also had them remove some old built-in shelves and they completed that part of the work and patched the walls there and in various other places where there was wear and tear. The rooms looked flawless when they were done. Carlos was very prompt and professional in all communications and getting an estimate and scheduling the work was very easy. I plan to use Carlos again for painting other rooms in my house.

Carlos and his team were on-time, did the work in an efficient manner, and they were very professional. This is the 2nd time we have hired Carlos Mosquera Painting for a project and it certainly won't be the last.

Carlos and his team did an excellent job. They were understanding, professional and courteous. The team always showed up on time and completed the job on time given a very tight time crunch. They also painted my cabinets in the kitchen which brightened the entire space and added in ceiling fans and doorknobs to help me as I moved in. I would definitely work with them again!