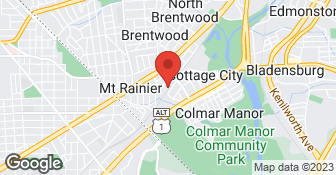 Super Service Award winner. We are a local business that originated in 2001 in Silver Spring, MD. Since then, our team of remodeling experts have been working non-stop around the DC-Metro area. Our number of employees depend on job type and size, averaging from around 3-7 employees working at a job site. We offer great prices and great payment plans! Money should never be an obstacle when you want your dream home....

66% off - Basement Design Consultation with Plans…

66% off - Kitchen Design Consultation with Plans…

Working with JCabido was a wonderful experience. I am truly thankful I called for their services. They are not only professional at what they do but also reliable and dependable. The end result, is everything I ever dreamed of which exceeded my expectations. I highly recommend JCabido Remodeling. Their crew is exceptionally skilled, efficient, and responsive. Will use them again in upcoming projects.

Description of Work
They gutted the entire second floor and installed insulation in the walls and ceilings, a new shower to my specifications, walk-in closet, new windows and upgraded floors.

This is actually the third time I have hired this company, and I continue to be very happy with them. I had a roof leak that created a ceiling leak in an upstairs room. After the roofers fixed the leak, this company came in to fix the interior damage. They cut out a 48”x48” section of ceiling drywall, removed the water damaged insulation, replaced the insulation, put in new drywall, patched it so you couldn’t see the seams, and repainted. They did a very good job. Some of the things I liked was the owner came with the two workers the first day of the two day job to point out to them what they should do so I didn’t have to explain it all over again, and they picked up and took their plastic sheeting and other supplies with them at night so I could use the room when they weren’t there. I would not hesitate to recommend them or hire them again.

I hired JCabido remodeling to remove my existing bathtub/shower and sink and replace with a standard tub with ceramic tile surround. They gave me an estimate and got me scheduled quickly. The workers showed up on time and got the job done just as scheduled. I was not sure on how the ceramic tile would look in my bathroom and Bernard helped me to select a tile that would go well for the size of the room. I could not be happier with how my bathroom turned out. I was very impressed with the quality of the work. This company is very professional and provides excellent customer service and quality of work. I plan to use J Cabido remodeling for future projects in my home.

From beginning to end service was outstanding. My husband and I may have been crazy to start such a big project a day before I went into labor with our baby girl but jcabido took care of everything while we were in the hospital. I really appreciated the care they took by sealing off the construction site to prevent dust and debris from entering into rest of the house, especially with a newborn in the house. Bernard and his team were professional and mindful and were proactive. Our basement came out beautiful. I can’t wait to use them again for the additional projects around the our house.

Bernard and his team are great to work with. They are my go to team for any type of housing project from painting to renovation and remodel work. The folks at J Cabido Remodeling provide detail planning and pricing on every job so there are no surprises and their work is top quality. I would highly recommend them.

The team did a great job! Very pleased with their professionalism. It really looks great. Also, they were able to schedule the work very soon after seeing the job site and generating an estimate. Highly recommend.

The project entailed trim work application along the foyer, kitchen area, living room and application of ceiling bead board which lasted for 10 days. The project was seamless and smooth. Workers were polite, efficient, and punctual. I give this company an A+ and would definitely work with them again in the future.

Cabido is terrific! Responsive, work performed was excellent, and very tidy and organized. Would definately use them again!

I've struggled in regards to writing a review about JCabido. Honestly it's been a love hate type of relationship. They do great work but improvements are needed in a lot of areas. I will be back to write a detailed review but currently I'm dealing with a 21 day no heat issue in the middle of WINTER. I should mentioned this is a post completion perspective of how I’m being treated once I’ve PAID in FULL. I initially reached out on November 3rd, 2020 via text message letting them know that my radiators were cold and not getting warm. This was not an issue before they started work on my basement. I asked if their contractor could come out and take a look. I got an immediate response saying they would give him a call and let me know when he could come out. The heating guy came the next day and explained the issue. He mentioned the JCabido Team was aware of his findings months ago and asked them to alert him as to when he could come back and resolve. Apparently, they did not follow up with him or I wouldn’t be writing this review and be without heat at this critical time. After asking for an update in our group chat numerous times, I was given a price to which I responded immediately saying let’s move forward. Since then, I've followed up many times asking for a status and I got this response from Bernard "I'm trying to get a answer from him I'm guessing he's super busy". I’ve called Bernard directly and left a voice mail and text message asking for the contractor's name, number and business name. I wanted to reach out myself because in the past I've caught the JCabido Team in lies. From my limited interaction with the heating contractor, which was awesome as he overly explained everything and was super helpful, I can’t imagine he would leave someone without heat for this long. I also explained to Bernard that I live with a senior citizen and we both have colds. Still no response. At this point, if they are telling the truth and the heating contractor is super busy, they should have reached out to another contractor in their network to resolve my issue. No way on JCabido watch a client should be in a no heat predicament for over 21 days. I’ve started to research contractors to resolve this issue and my hope is that they are competent. I should not have to spend my time doing this task. I regret referring my neighbor to them. Please note this was before things got bad.

On balance the drywall repairs and painting were well done. Electrical installations went well. The work was supposed to take three (3) weeks and went over, creating a great deal of stress for me as I was on deadline to get back into my home from temporary housing. After I moved into my house, I noticed there were a number of anomalies -- things they should have noticed but didn't. I called them back and they made the necessary adjustments (porch stairs, banister installation, closet shelving, and light switches). The point is that for what I paid, I shouldn't have had to call back for corrections. I give them a C for the length of time as well as the call-backs. I give them a B for responsiveness and for immediately addressing issues I brought to their attention.

Description of Work
I needed for my house to be "made-ready" after returning from overseas and having tenants living in it. The work included: drywall repair, interior painting, removal of existing kitchen cabinets countertops and replacement with cabinets I purchased; installation of light fixtures; and various carpentry repairs.