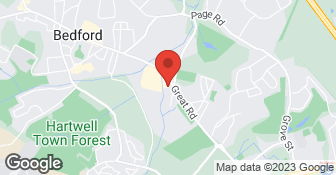 Design 1 Kitchen and Bath is a family owned business in Bedford, MA, specializing in kitchen and bath design and remodeling. We have a 3,000 square foot showroom with over 25 displays for you to look through. Design 1 can take your project from the beginning concept phase right up to the finishing touches, all under one roof. We can work with your contractor, designer or architect or we can take care of all of that in-house with our design/build staff. Our process begins with either an in-home visit or a visit to our showroom with your plans, measurements and pictures. We'll listen to your ideas and concerns related to style, design and budget and formulate a plan for design. We don't charge an upfront design fee since we'd rather have you feel comfortable with us and our products and design. What we will do is arm you with the information you need to make an informed decision on your design and budget. From there, you can make a decision to move forward with us on your project. Can also find on houzz.com as well as on pinterest....

We engaged Kitchen1 to help us design our Kitchen. They advertise to be a one-stop -shop being able to supply materials (Cabinets, counters, etc) as well as manage the labor and install handle everything except the appliances. The initial engagement with them was very promising. We liked the Designer(s) Katelyn, and Mike. They came did a measure and provided us with what we thought to be a thorough initial design. They quoted that our kitchen range should we want to proceed would be about $60,000 - $80,000. This was what we expected as we'd seen numerous other places and was in line with where we thought we should be. At this point we already picked cabinet material, number of cabinets to furnish the entire kitchen, pantry and laundry area and it seems that they were really close to what we wanted so we paid them the $1,500 design fee. We were a bit concerned with this because as we were signing they told us we still wouldn't get any drawings/designs. We'd only get a detailed estimate and could use the $1500 towards the materials so we signed anyway doing so based on their initial estimate. The next phase was to move to the layout of the individual cabinets and finalize color picks. This also went fairly smoothly and we concluded this process around June 1st. We had made no substantial changes to the design, in fact we removed some labor needed for gas plumbing as we switched back to an electric cooktop instead of dual fuel. We were told that the estimates would be ready the following Wednesday (6/8) and setup a meeting to discuss the estimates then. When we arrived on 6/8 is when things started to fall apart. It was completely obvious that they hadn't completed the estimates as promised for either the materials or the labor. They made us sit around and wait 30 minutes as they "Printed out" the estimates in the back. When we reviewed the estimates, the materials alone were $62K and we were told they were not completed with the labor estimates which they said would be $50K and asked if they could have until the following Monday to firm that up. The estimates for the materials were far from the level of detail as promised For example they had one line item for tiling the floor and all back slashes with with no break out by SQFT, Materials or anything else. Additionally if we tried a manual calculation to determine what the pricing structure was we came up with 3X what we knew to be the cost of the tile it self. Same goes for the countertops! We actually calculated that one of our countertop selections calculated to over $140 per sqft for what we knew to be about an $90 sqft counter. Across the board the estimates for materials were about 50% higher then what they quoted prior to us paying the $1500 retainer. After being able to digest this we reached out to them via email (6/9) and phone (6/12) expressing some of my concerns about this. i asked for a few simple items: 1. Break down the estimates so we could tell what we were paying for with each line item and what we'd be getting for our money. (I.e. Sqft, material cost, etc) 2. Provide to us an estimate of what the original $60-80K kitchen looked like so we could compare to what was in their current estimate. 3. Provide a list of things that caused the price to change that we may be able to take out of the design. 4. Complete the initial estimate providing me the labor portion which was due on 6/9 anyway. On the phone on 6/12 Mike was understanding of this, agreed with me that the estimate was lacking the detail necessary and in his words he had "told Katelyn that this should have had more detail". He also agreed to provide the above three items. On 6/17 I hadn't heard back on any of these, and now being at the end of my patience with this process asked Mike to refund our design fees so we could move. Mike Responded saying that they were working on a way to reduce the cost without sacrificing the design and working with subs to drive costs down and he'd get back to me. On 6/20 he responded to me with some issues answering some of point #3 above. However his "Biggest item that affects pricing" was that we wanted stained cabinets instead of painted which is making things 10% higher. The issue is, we went in from day 1 (prior to their initial estimates) saying we wanted cherry. He also stated two sections of the project were adding cost (Pantry and Sink/Laundry) Again these were all known in the initial design so I'm perplexed why we thing it's adding cost at this point. Finally he stated the cost when up because we moved from their "Holiday" brand to their "Showplace" brand. This was a move we did do, but we were told that they were equal in price structure and it really came down to our design preference about which one we chose. As of Friday 6/24 I had still to receive the break down of the estimates, the original estimate for what he was quoting for the $60-$80K kitchen or the labor estimates completing the initial delivery of the estimates. In my opinion, I didn't get the feeling that we were being purposely being mislead to get the design fee, but that Design1 completely messed up the process and after repeated attempts to right the course, they failed to do so. This was a complete fail.

Description of Work
Contracted with Design1KB to a Kitchen Design. Goal was to have them design and build a new Kitchen in our house.

we went to design 1 for a quote for new kitchen cabinets. sales staff was prompt, professional and gracious. he told us that their minimum budget for a kitchen renovation is $50,000.

Description of Work
They were pleasant enough to work with, however, throughout the project it became clear that not enough attention was paid to the details in the original design plan. In addition, with many sub contractors hired to do the work, coordination and communication was an issue. Luckily I had the time and was able to step in and manage.

Description of Work
They prepared a few different kitchen designs. We intend to use them later this year for a kitchen remodel.

We are a family owned business, we pursuit quality, we work hard every day to accomplish or surpass our customer's needs and/or expectations. We believe that when a family business grew together the family stays together, we try our best to bring these principles to our customers, which involve, honesty, kindness, goodness, patience, hard work, safety, and quality workmanship. As a family, we try hard every day to live up to those principles. Starting from ground zero up, we grow doing the best for our customers, and still doing the best for our customers.  …

Established in 2009, Newbridge Contracting has made quick work of building a large client list, along with a reputation for impeccable work and craftsmanship. Our tile specialists work diligently to complete every job to your exact specifications and do so with respect and professionalism. We are confident in the work we do and can handle any type of tile job residential and/or commercial. Whether it's ceramic, glass, porcelain, marble or any other tile; rest assured that we will lay it down in style at an affordable price. We also give free estimates so give us a call!  …

How is Design 1 Kitchen and Bath overall rated?

Design 1 Kitchen and Bath is currently rated 3.6 overall out of 5.

What days are Design 1 Kitchen and Bath open?

Design 1 Kitchen and Bath is open:

What payment options does Design 1 Kitchen and Bath provide

Does Design 1 Kitchen and Bath offer a senior discount?

No, Design 1 Kitchen and Bath does not offer a senior discount.

Are warranties offered by Design 1 Kitchen and Bath?

What services does Design 1 Kitchen and Bath offer?