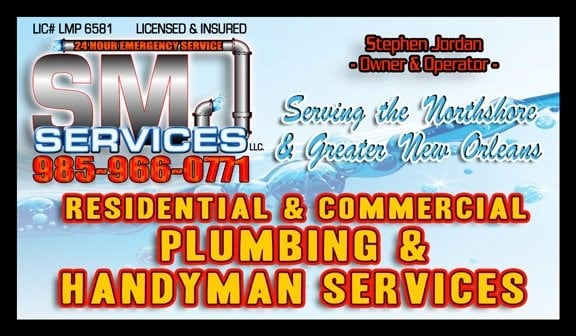 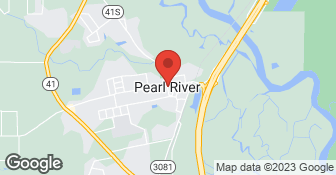 SMJ Services, LLC is a small, locally owned, licensed and insured plumbing contractor with over 12 yrs experience in all phases of commercial and residential new construction, remodel and repair. Integrity and Quality work is what SMJ Services strives for. Sewer Camera Service....

Very satisfied. SMJ Plumbing completed the repair work on both of my water heaters in a timely and professional manner. Stephen's crew did very good work, kept the work area clean and kept me informed of their progress. I would recommend SMJ Plumbing for plumbing/water heater work.

Thank you for the kind review. We always strive to be the best.
5.0

Prompt and efficient service. Brandon was very professional and answered my questions

Mr. Steve showed up able to work less than a week after my initial call and finish the repairs by the end of the day. A very efficient and tactful contractor.

Description of Work
I started a bathroom renovation that I could not finish.

I had two 17 year old water heaters that needed to be replaced in my 2nd and 3rd floor attics. I had used SMJ plumbing for a minor issue a few months previously. Stephen did a great job, so I wanted to use his company again. I called Stephen on a Tuesday. He helped me choose the replacement water heaters over the phone. The order was then placed to the manufacturer. The following Wednesday Stephen and Tony promptly arrived and installed both water heaters in about 4 hours. They did a great job protecting the floors and stairs. They were both very conscientious about not making a mess and cleaning up after themselves. A friend of mine recently replaced his water heater for a few hundred dollars less, so I'm sure I could have done this project a little bit cheaper. However, for the extended warranty and excellent job performance, I feel SMJ charged a very fair price. I will definitely use SMJ in the future.

It went great. Stephen was very responsive, He explained the pros and cons of each system, stated the unit he intended to use, detailed the efficiency and cost, and provide installation options for indoor - outdoor. After seeing the job on site, asked is he could do a few additional minor plumbing, to which he responded quickly and provided very reasonable estimates. It was a pleasure working with this company and Stephen in particular.

Description of Work
Replacing a water heater with a tankless system

Steven answered the phone immediately and provided an estimate over the phone giving me three options for water heaters based on years of warranty. He made a couple of calls and came out to replace our 16-year old electric water heater late on a Sunday afternoon. His service was exceptional and he and his partner even cleaned up after themselves. Thank you, Steven.

Description of Work
Our water heater sprung a leak and fried the heating element.

After initial contact, they came out to get the scale of the jobs we wanted. They were very professional and gave us a very accurate quote on the job. It took a few weeks to complete and we are completely satisfied.

Steve was outstanding! He was conscientious, professional and considerate of our home. He even loaned us a fan to dry out our saturated carpet! Would definitely hire again and recommend to anyone who needs a terrific plumber!

Thanks for the kind words.
1.0

We told the plumber there was no urgency since we had 3 bathtubs and he could come the next day. He decided to come after hours anyway and saw immediately that there was no problem with the tub: we had just forget to put down the handle which made the water drain excessively slow. the plumber charged us $155.00 for the above. He did absolutely no work: he literally put the handle down in the tub and ran some water: this procedure took between 10-20 seconds. We live in a $500, 000 house and this 33 year old decided to be grossly unprofessional and charge us a dishonest price because in his eyes we had the money to pay. Unfortunately, I, the wife, wrote the check even though I knew the plumbing price was dishonest. After Stephen left, I talked the matter over with my invalid husband, and he said it was critical that we inform the public of this plumber's dishonesty. The plumber actually said he charged me more: because of the bad driving conditions due to excessive rain. I had told him over the phone that he could come the next day but irregardless one does not punish the customer for the weather when one was told up front that the problem was not at all urgent. This young man is greedy and envious. I assume Stephen is used to doing average middle class to lower class homes and assumed he could commit highway robbery with us since we have a wealthy home. He commented with envy how gorgeous our home and property was. I did call Stephen several minutes after he left our home and told him I would pay him a $100.00 for coming out and if he was not willing to compromise and take a professional offer, I would have to write an unfavorable review. His listening ability over the phone regarding the above matter was pathetic: he had no desire to even listen to logic or reason.

Mrs [Member Name Removed], I apologise to your husband first and foremost. When I found your error, you expressed that I could not tell your husband of 30+ years that you use Drano to try to clear the tub drain and when this didn't work you called out a plumber. At this point I was not aware of him being an invilid. And thought you guys may have a rough relationship. When the problem was resolved with a flick of a lever , I asked if there was anything else you would like me to look at. I inspected your water heater for any visible damage, and address the solutions for getting water to your kitchen sink faster. This is something you said has been extremely aggravating to you. Especially in the winter time as it can take as long as 10 minutes to get hot water. When we went on the porch for you to write the check, in the absence of your husband, I told you that I would credit this job towards fixing the hot water at the kitchen issue. As you will see I did not cash your check. As far as being envious, I was taught that it is polite to compliment someone on their home. I did not comment on your home out of envy, rather to congratulate you on your accomplishments. When you told me your age I was truly Blown Away. I honestly did not think you were that age, I said wow I thought you were 10years younger. I Just wanted to clarify ,as you may have Misunderstood, I was not showing Envy, rather being polite to a customer. To assume that I deal in mostly low end homes and think that I charged you because of your nice [Member Information Removed] is an insult to a large portion of my client base. I am a man of my word and people across the state know me as such. I do new construction, residential and commercial, as well as repair. We have 5 of our latest projects in the Parade of Homes on the South Shore the first weekend of June. Please feel free to come out and see the homes we have just completed with Creative Builders.