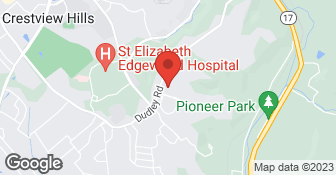 Five Star Home Inspections is dedicated to providing you with valuable information about your new home. We thoroughly inspect all major components of the subject property to expose unknown defects and advise you about future maintenance about your home once the purchase is complete. Our company will give you the information you require to make an informed decision....

http://northernkentuckyinspections.com/Home.php# Buying a home is one of the most important decisions you will ever make. Like any investment, you will want to know as much information about your purchase as possible. Our comprehensive, professional home inspection services are designed to help you with that effort. The property buying process doesn't need to be stressful and complicated. Choosing a qualified, honest, and experienced real estate inspector can give you the knowledge and confidence you need to make sound real estate purchasing decisions. At Northern Kentucky Inspections, our comprehensive inspections and commitment to honesty and accuracy bring peace of mind to every client. At Northern Kentucky Inspections, we take the time to do the job right. We spend time with you, clearly explaining our findings, giving you real answers that can help you make the right decision. We understand how important a real estate purchase is to you. We don't consider a job to be complete until all of your questions are answered. At NKI, we don't answer to anyone but you. We do not have any personal relationships with real estate agencies, mortgage brokers, or anyone involved in the real estate industry. We are completely independent. This is how we can honestly say that we operate with NKI. Before you buy call NKI. Our home inspectors are not only experienced construction, appliance, plumbing, and electrical inspectors, they are great communicators. Our professional inspectors are friendly, approachable, and well-spoken. Call us today and experience the difference for yourself. (859) 485-2914. Northern Kentucky Inspections was established in 1999, before people knew that home inspections would be a necessity. Today, whole house inspections are an important part of almost every real estate transaction. It is our goal as a company to find any deficiency in the home that you are getting ready to purchase. It is also our goal to teach the new buyer simple things they need to know. Since there is a move-in date, it is our job to protect the investment of our client. There is no perfect home or building; therefore it is our job to tell our client the facts allowing them to make an informed decision. Having a whole house inspection will better educate the client for making one of the biggest financial decisions of their lives. We also try to make the inspection easier for the client by doing a termite inspection the same day. Rob Wells, Owner and Operator Certified New Home Inspector Certified Commercial Property Inspector Member of PHCC Certified in HVAC and Electrical FHA/VA Approved Investment properties are our specialty! Proudly serving the Northern Kentucky Area for nearly a decade! Lic# HI2265  …

Perfect! Chris was informative, patient, and explained everything!

I came home to a mess; he inspected the attic and left a pile, (and I mean a very large pile), of blow in insulation all over the carpet in the upstairs hallway. It was several inches thick in places and covered a very large area. No attempt was made to clean up the mess. He also left blinds looking like kids had been playing with them in every room; blades at every angle, askew, partially raised. Cabinet doors were left open. I have used several other home inspection services and cleaning up and putting things back in place is a routine process. They carry tools in their car to perform this task and it is a common courtesy to leave a home in the condition you found it when done inspecting, especially when that home is on the market. Do unto others, I say, so even if you are a buyer, please ask your home inspector to leave the home as they found it. If you are standing there when they inspect and see a mess, ask them to take care of it - that's what they are paid to do.

Description of Work
I was selling my home and Brian was hired by the buyers to do the inspection and left his card.

The home inspector did a shotty job. The report stated that the house had not leaks, however on the day that we moved in and used the shower, it leaked all the way to the first floor kitchen- I'm talking buckets! There were also old wet marks on the ceiling that were missed. We have had to have contractors come to the house and have estimated the damage to be up to $12,000! When I called and spoke with the owner of the home inspection company, he came to look at the shower. He lied, was manipulative and attempted to swindle us to get out of admitting fault. Terrible service! On top of that, we have found other things that the inspector missed- such as a large leak in the basement, other faucets that didn't run hot water etc....Will never hire them again!

Bad. The guy spent most of his time checking the kitchen appliances, which I didn't care that much about. He missed that most power outlets weren't working, rotten wood around several windows, and birds living in a vent. he incorrectly said there was something wrong with the furnace (I brought another guy in to check it and he told me the original inspector "probably didn't know what he was talking about). These are just the obiovus things that it shouldn't take an inspector to find. He also missed a leak in the basement that he could have spotted if he had checked the place the way somwone like, say, an inspector would be trained do. What was most disturbing was not getting an answer from Five Star. When I emailed the guy who did the inspection, he basically told me he had done things right. I then tried to contact a gentleman named Rodney who wither owns or manages trhe business and never heard back from him. Five Star must have a sweet deal goin with Sibcy Cline (who "recommend" them pretty strongly). I will not hire them again.

They were very professional. The answered all my questions.

Very articulate, thorough, professional. I'd highly recommend them. I forget the price I paid, the price reported is my vague estimate!

Description of Work
thoroughly inspected home, discussed every question I had, explained every step of the process to me as he went.

While the inspector was very pleasant and professional, the inspection itself seemed incomplete. The inspector did not bring a ladder to check the roof, which seemed odd given that we needed to have the chimney examined. It did not seem he had the proper equipment to execute a quality inspection, and did not give a thorough examination. Quite frankly, the job seemed very rushed.

I was referred to this company by my realtor (Sibcy Cline). The gentleman came on time and answered some of my questions in what seemed like a competent manner. However, his performance left a lot to be desired. Here is what happened: 1- Even thought it's a condo, I wanted to get a full inspection. The inspector claimed that, because it was a condo, he was only going to inspect the inside. After some back-and-forth, it became clear that there was no way he was going to get on the roof or look at the outside, so I decided to let him go ahead with the inspection of the inside. When he told me how much I owed him, the number sounded high to me and, upon checking the original quote later (should have had it with me), I saw that he had charged me for a full inspection. I called Sibcy Cline to and they told me 5-Star had agreed to send the inspector back to look at the roof (this whole process was completely unnecessary and aggravating). 2- The report said that the areas around the windows and deck needed normal painting. However, a contractor that came to do some work later told me there were significant cracks and moss and some of the wood around windows and deck was rotten. Also, there was an bird (complete with nest and abundant excrement) living in one of the vents. the inspector totally missed this. 3- There was a lot of loose siding at the back of the property. 4- Several power outlets don't work. The inspector gave the elctrical a clean bill of health. 5- He did point out that there could be problems with the furnace and water heater. Due to this, I hired a specialized inspector to check those. He told me they were fine and, in his words, that the guy who had checked them probably didn't know what he was doing. 6- The inspector told me he couldn't check the sump pump because it was sealed. Without knowing anything about sump pumps, I was able to find a way to open the sump and test the pump. So I have to think this gentleman either didn't know how to test a pump or just didn't feel like doing it. To top it all off, I tried to contact 5-Star by mail and got no response; then tried the BBB and also got no response. So, no, I have no intention of sending any money their way in the future.

They missed major issues. We had to replace the garage door opener $335. We had to replace the stove which was leaking gas on top of the computer motherboard in it being bad $1000. There was holes in several screens he missed $50. Holes in the flooring. Rust on the back door. Another winter storm door leaks air consistently and is not properly sealed/ fitted. Had to call out to have dishwasher repaired$100 Called to have service on two of the ceiling fans$130. A leaky faucet and drain that does not work. The owner offered us a settlement of only $550 and then sent the wrong release of claims ( had the wrong name and amount 100 dollars less). Never replied back. We are now seeking a lawyer.

Description of Work
Home inspection of house and radon testing

They arrived on time and described the process from beginning to end. We then went through the home top to bottom inside and out the inspector was very knowledable and patient awswering all of my questions while pointing out several diffencies in the home. I have been through several home inspections and they far exceeded my expectations. i would refer them to my family and freiends.

Complete Whole House Inspections including; Electronic Radon Testing, Wood destroying inspect, lead, air quality, aluminum wiring, polybutylene piping, EIFS, swimming pools, asbestos and mold. We will tell you if this home “Can stand the test of time”. Home inspections are not a prediction of future performance, but can pinpoint existing problem areas.