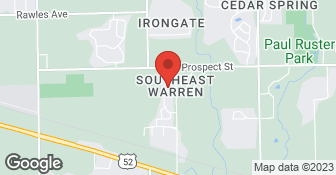 I called the owner and he answered right away. We were looking for a fix to a second story window to seal before winter as it was starting to leak. He wasn't able to perform services at this time but gave some great advice on how to get quotes for others and I will include him in a search for other services around the house as soon as we are able. Overall, very helpful and kind.

David was very responsive and answered my call right away. He was able to come within a week and charged us a fair hourly rate. We was very careful in removing the mirror and did a great job patching the drywall.

Description of Work
Removing mirror and trim above fireplace.

Thank you for rating us on Angie's List and elsewhere online! Reviews make such a difference and it means a lot to us. I'm glad it went well, please keep us in mind for future projects. David Price, owner 317.724.8995
5.0

I called and the owner was able to work my project in within a few days. He came promptly on the agreed day. I am having waterproofing work done in the basement and needed to have existing drywall and studs removed before that procedure could begin. He did an excellent job in less time than I imagined it would take. I will contact him again when the basement is ready for new drywall again.

Description of Work
Demo in basement

Thank you for taking the time to review our company! Very kind of you. It was our pleasure and look forward to helping complete this project when you are ready for us! David Price, owner
2.0

I wanted to hire them to remodel a bathroom that was destroyed by a previous tenant in our rental. We had an appointment April 23rd at 5pm. Myself, and the other two property owners had arranged to meet him at the rental. He called at 5, to inform me he was “running behind”, and asked if we could reschedule. Absolutely unprofessional to call at the appointment time to inform me he was going to be needing to reschedule. We agreed we would all leave and and come back in an hour. We did that, and he showed up and did a walk around. We let him know we only wanted to focus on the bathroom right now. He said his plumber would be in touch, so he could come so his part of this estimate. The plumber called as promised, set an appointment and showed up on time. He did the estimate, and had it to me in two days. Now we are still waiting on David’s quote. Sent several messages, and finally got a call the morning of may 3rd, where he proceeded to clearly not know what we needed done and have absolutely no estimate drawn up what so ever. He hung up on me, because said I was “agitated”. I, still trying to work with the company, tried to message him regarding it. He told me he would call me that evening, that evening came and went. I asked him about it, and was told “I thought you were calling me”, fine. Mistake. He says he will call the next day, 9pm. Zero calls or texts regarding anything, and still no quote. Roy’s plumbing was fantastic and in the ball. Well done handyman, is not reliable at all.

Description of Work
Flaky, with no communication

imagine you show up for an interview (appt) and that person goes from yelling to apologizing then yelling and cursing you and then saying how much they like you to yelling again... then they send you 45 texts (yes...FORTY FIVE TEXTS) in 2 days, and you've not even decided to take the next step, they send harassing texts despite asking them to stop... they use a veiled threat to rate you negatively on the review site they work for unless you work for them trying to hurt your chances of obtaining future work...(every client is like a new prospective place of employment), if in your interview (appt) the above happened to you... would you feel comfortable working for them? (that's exactly what happened here by someone who we did not do work for, to get a more accurate picture of clients experiences read the reviews where the >>>"Services Performed"<<< is marked "Yes" unlike this one where we did not provide services and it is marked "No"
5.0

They did a fine job and I would recommend them. I would definitely hire them again.

Description of Work
They put in some drywall and insulation in my garage.

Thank you for taking the time to rate us here on Angie's List! So kind of you to take time out to do this for us, reviews make all the difference in the world for us, and we value each review we receive. Hope you have a great week. David Price, owner 317.724.8995
5.0

David was professional and on time. He was very thorough in explaining the current project as well as future projects. He removed the glass shower door and replaced the caulk between the shower pan and tile. I would hire him again.

Thank you for taking the time to review us here on Angie's List! We really appreciate it! Hope you have a great week! Please keep us in mind for future projects! (we do bathroom and basement remodels, new decks and deck repair, drywall installation and finishing as well as repair). David Price, owner 317.724.8995
5.0

It was A quality work & completed in a timely manner.

They did not respond to my request.

Description of Work
installation of blinds and screen repair

We don't have any record of them contacting us.
1.0

It didn't the price was insane. 1,200.00+ for small projects.... would not give me an hourly rate and told me that the replacement of a Braun bathroom fan could take all day????

Why does this client lie? They likely either have an agenda. Or they didnt like my answer. THE TRUTH.. I told him it could take 2 or 3 hours for the fan, sometimes 4-6 hours (look online for how many hours, i.e. homewyse and other sites for potential time investment., but in some cases it takes a day if duct work is involved, many times fans are installed without connecting to duct work, sometimes there is no duct work and when you combine darkness of an attic with moisture you get mold. THE TRUTH... as it pertains to hourly I told them we have an hourly special on Angie's List. THAT is not what he wanted. He wanted me to agree it would only take a couple hours and quote an hourly rate. I cant guarantee how long it would take.
5.0

Great! I couldn't be more pleased. They arrived on time. The owner and Charles came together because one door was large and might require 2 people. Charles thought he could handle it and fixed everything we needed. The quality was great and the amount of time it took was less than expected. Will definitely use again!

Description of Work
Several doors did not latch. They needed rehung.

See above. If not listed we don't offer those services.

Well Done Home Renovations is currently rated 4.6 overall out of 5.

No, Well Done Home Renovations does not offer eco-friendly accreditations.

Are there any services Well Done Home Renovations does not offer?

See above. If not listed we don't offer those services.