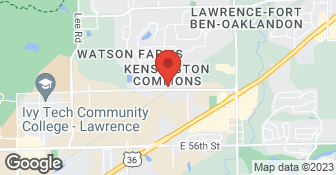 Tony was recommended to me on Facebook. Never again. He came to look at some wood rot to give me an estimate. The estimate looked fine so we scheduled the job. He told me he wanted half up front via Paypal, but I told him I was locked out of my account, that I would try, but would prefer bill pay (check sent from my bank.) I tried, but couldn't get back into Paypal, so I set up bill pay and texted Tony to tell him what I had done. I also told him 2 days ahead of the job that the check would arrive in 4 days. He responded ensuring I was sending it to the right address, etc. The day of the job he called me saying he was at my house and asking where I was. I reminded him that he told me I didn't need to be there - the work was entirely external. We moved past that, but then he said I was going to have to leave work and meet him at my bank to pay him since my bill pay check wouldn't come until Thursday. I pushed back on that because I couldn't rearrange my schedule at the last minute. He became aggressive pretty quickly - let me know he had 4 men at my house waiting to work and he was losing money. He also asked why I didn't want to pay him and insinuated I was having a hard time paying him and was going to stiff him. Really?! I mean...just leave dude. If you think someone is going to be that bad of a customer just cancel the job. He also said he was upset about the bill pay because he didn't know about it. That was lie #1 - he did know because I texted him and he responded. So odd. I completely understand his need for payment (half) up front - I just didn't have another option - we agreed to reschedule the work for Thursday. He came back Thursday and we did a walk around my house to confirm the work to be performed. I made a list as we walked and left for work. I received a call awhile later from the hardware store to pay for materials over the phone - something we had agreed to up front. I gave my cc info and the call ended. Tony call me back minutes later saying I needed to provide the extra 3 digits of my zip code. I asked if he meant the plus four, but he said no it was 3 numbers. I asked if he wasn't referring to the CID code but he said no the zip code. I was looking it up (not memorized), but before I could find it he said that he would just pay for it, that I could pay him cash later, and that that particular hardware store never accepts cc payment over the phone. He seemed extremely frustrated with me, but I didn't ask him to do this. And I will never understand why he agreed to pick up materials from a store that he knew wouldn't let me pay over the phone! We met at my bank later in the day so that I could pay him what was essentially the up front deposit. The job was going to take one day (even though he originally said 2-3), so the check in the mail was going to be payment for the remainder. When I got home I inspected the work, but there were a few spots left undone. He texted over the weekend saying the check hadn't arrived as promised and suggested he was going to just come over and get a check. It felt aggressive. I told him I would call my bank Monday to see what was going on. I did that, but didn't get any answers until I got home that night - the check was returned to me undeliverable. That's never happened to me before, but of course it happened this time. I texted Tony to let him know what happened - even sent a picture of the check. Said I'd be happy to give it to him once he finished the work. We ended up speaking the next day and he became extremely aggressive very quickly. He lied about what we spoke about during the walk around the morning of the job, lied about how he examined the house during the estimate, and then (this was all him bulldozing the conversation) he threatened to put a lien on my house for non-payment. WHAT ON EARTH!!! He has no integrity and poor communication skills. He lied to me, made harassing statements, and threatened legal action that was completely unnecessary. While part of this conflict stemmed from miscommunication that I am partly to blame for, his response was beyond unprofessional. I decided to pay Tony and to be done with him forever. Like I said at the beginning of my review, he was referred to me, but my experience was so bad I honestly can't imagine how other people can recommend him or how he stays in business.

Ms. [Member Name Removed], Sorry, I am a Carpenter and agreed to perform wood replacement on your home. I emailed you a detailed estimate of items that would be addressed. I did in fact repair everything listed in estimate. There is no mention or even the word paint in estimate. Sorry that you assumed painting was included. [Member Name Removed] please read your contracts from this point forward completely so nobody else threatens you with a lien. (As a buisness owner this word is what we use to collect our money when a job is completed professionally) PS. I agreed on a buisness relationship not an intimate relationship. I will pray that you find Mr. Right.
1.0

I was needing this work done ASAP for a home inspection. I was then told I wou get an estimate emailed to me but never received it.

Sorry that as a business owner I am not able to perform work with the promise that I will be paid when and if the house is sold.
5.0

Perfect! We are hiring again for next project.

Fantastic! I had planned for Tony to help me finish a few projects that were needing professional input. In no time, I was relegating new items to his list. His work included plumbing all new fixtures in two baths and the kitchen, upgrading electric items where needed and repairing some subflooring damaged by removing some tiles. Tony and his helpers work quick and finish all items as needed. His pricing was exceptionally fair. He can do a variety of different trades. I will call him first with any upcoming work. If he can't help me, he'll refer me to someone that I can trust because he trusts them.

It went very well ?Very knowledgeable ?He removed a wall so we would have an open living area between the kitchen and living room ?He moved our front door and enclosed the walls where our front door was to make ?walk in pantry. ?Installed ceiling lights to give us more lights that we needed. ?Installed new cabinets and put an island in for us. ?Moved the water lines from the wall to the island. ? Put in a dishwasher. ?Installed out built in oven and cooktop ?and ran gas lines to it. ?Put puck lights under out top cabinets and put on crown molding. ?He did an excellent job and is very well schooled on everything he does. ?He is very helpful and offers a lot of input.

Description of Work
Opened the kitchen up by removing wall between kitchen and living area. Relocated front door and installed 36in door with side light. Hung new cabinets, installed 6 ceiling lights and new oven and cooktop Installed an island with double sink and dishwasher. Built a big walk in pantry.

This was an excellent project. Tony and his crew were absolutely fabulous! The cost was about $30,000 but the app wont let me put that.

OWNER-OPERATED. NO SUBS.2012,2013 CONTRACTOR OF THE YEAR. COST IS DETERMINED BY THE JOB. NO ADDITIONAL TRAVEL CHARGES. NO SERVICE FEE.NON-SMOKER.MUST SEE JOB TO GIVE ACCURATE QUOTE PLEASE USE DIRECT EMAIL OR CALL ABOVE PHONE NUMBER.  …

Since 1990, Danny's Pro Painters has provided exceptional service to our customers. Originally started in Indianapolis and surrounding areas. We carry workers comp. General liability insurance. 45 employees. No subs. Cost is determined by the job. No travel charges. No service charges. May contact through email, but please include your phone number. Award winning.  …

We McClees Enterprise Inc is a family owned and operated local business with over 30 years of painting industry experience. As a Super Service Award winner (1999-2019), we opened McClees Enterprise Inc because we saw a need for an honest painting company in the Indianapolis area that is driven by morals and quality. It’s our mission to be a company that brings back the personal approach to our customers. It is our goal to build a relationship with our clients that will last a lifetime. What sets us apart from our competitors is our dedication to do a quality paint job for our customers the first time. If for any reason our customers are not satisfied, we will make it right. What sets us apart from our competitors is our attention to detail. You can be confident that we will clean up completely and leave no paint on your concrete, grass, furniture, floors, etc. We do what we do because we love to see our customer’s faces when we completly transform a room or the outside of their house with a quality paint job. We take the time with each of our customers to the point where we become more than a business partner, we become friends. We also set ourselves apart because we are certified lead specialists and do not shy away from these important jobs. We are an excellent painting company for Angie’s List members because we will put you first. We would love the opportunity to partner with you and all of your exterior and interior painting needs. For fastest results, please leave your phone number and email with your inquiry.  …

How is Anew Look overall rated?

Anew Look is currently rated 4.4 overall out of 5.

What days are Anew Look open?

No, Anew Look does not offer eco-friendly accreditations.

No, Anew Look does not offer a senior discount.

Are warranties offered by Anew Look?

No, Anew Look does not offer warranties.

What services does Anew Look offer?