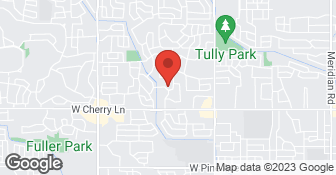 We have been in the repair industry for 30 years, with 18 of those years servicing the Treasure Valley. We accept cash, checks, and all credit cards as payment for services. The Maintenance Shop also works with many out of state property owners, providing repair services and periodic inspections for rental property....

I am posting this as a warning to anyone contemplating using services of Steve of The Maintenance Shop also known as Treasure Valley Repairs (Meridian, Idaho) in hopes that others will not become victims of this company. I believe seniors, like myself, are especially susceptible to this business? practice of intimidation and bullying to extort money. He has set up his sprinkler blow-out service as follows: complete a form on his web page,submit, and await a confirmation email. He specifically states that if you do not receive a confirmation email you should submit again. Once a confirmation is received, you must check his blog every day to find out if he might be in your neighborhood and if he has or has not blown out your sprinklers on that day. I submitted his form and got no confirmation email. I asked him for clarification as I was a new customer and he sent a text that basically said refer to his web page. So I submitted a second request form. Again, I did not receive a confirmation. I called his phone to find out what was happening. No answer. A month later he shows up at my home after dark and after the area had experienced freezing temperatures.When my husband informed him we had the sprinklers blown out weeks ago, he said I owed him $25 anyway. The following morning I received an email invoice so I was obviously receiving his emails. He also sent a text saying he had placed liens against 5 homes last year and he had to take time out of his very busy schedule to do so and demanded immediate payment in order to avoid a lien against my home. This was followed by a direct threat of a lien and he became volatile. When I clarified I had never received confirmation emails he responded in an alarmingly threatening manner. A few of the more choice statements included: ?your confirmation email probably went to a junk folder or something. . . I have proof you agree to the term so you need to prove you did not receive the confirmation email. . ., I do not take calls during blowout season because I have too many customers. . ., I have all the information I need. . ., not sure what kind of game you were trying to do. . .? etc. I felt I had to pay him (by cashier?s check which he has never acknowledged) in order to prevent him from continuing to harass me. His responses were so volatile and threatening that I don?t think I am dealing with a stable individual. No one should be subjected to such unethical behavior and have to spend time defending themselves against such unprofessional attacks.

Description of Work
At the present time he is threatening me with a lien against my home. Other than threats, nothing

Most of the review has been blown out of context, but It states in our terms of service that customers agree to before the sign-up form will even send that if they do not cancel their sprinkler blowout and we show up at the property their will be a $25.00 non-cancellation charge. It also states that if invoices aren't paid within 15 days they are subject to a lien on their home. We get about a dozen complaints every year out of 1,100+ sprinkler blowouts because they do not feel they need to pay money owed for services or non-cancellations. We have done everything we can to make it simple to understand. Even with doing over 1,000 sprinkler blowouts each year we still get 200+ cancellations from those who followed what they agreed to and sent us a cancellation notice. We have done over 15,000 sprinkler blowouts this way, and it works quite well. 85% of our customers are repeat customers, and many of those have been customers for 10+ years. Our sprinkler blowout terms of service can be found here: http://treasurevalleyrepairs.com/terms-of-service.html on the second half of the page. VERY easy to understand.

Sorry, we do not provide services for concrete, or re-roofing at this time.