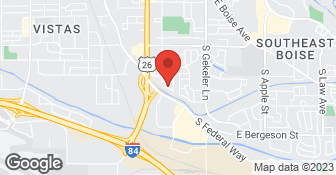 Dyer Property Maintenance is a full service property maintenance company specializing in home repairs. Whether it’s cutting a lawn, repairing sprinklers, general repairs and upgrades or making that “rental nightmare” ready to rent, we want to be your trusted source for affordable, quality work.

George arrived as agreed. He assessed the problems I was having with my sprinklers. Turned out to be some basic adjustments and simple modifications. He took care of them and basically just charged me for his time ( one hour min). I will use him again in the future.

George was great. Very responsive and very personable. He found a time that worked with my schedule and then stayed in communication to pin down the time he would arrive.

Description of Work
George repaired a few sprinklers, turned on our sprinkler system, and consulted with me on some landscaping and watering plans.

My friend's regular sprinkler serviceman went out of business leaving her to find a replacement in the Boise area at the last minute. She contacted George with Dyer Property Maintenance. She was so pleased with his quick response and the through and reasonably priced job he did, she recommended him to me. I had a dining room table that I loved which was damaged in a recent move. Shortly before Thanksgiving, I contacted George explaining my plight that my table was unusable and that I needed it for Thanksgiving as I had a large family gathering planned. He picked up the table pieces to take to his shop to repair and assured me he would have it repaired prior to Thanksgiving. Not only was it completed on time, but he delivered it and set it up for me in my home. I found George to be personable, professional, prompt, and skilled. I would not hesitate to use him again for any repair or property maintenance needs.

George Dyer himself showed up to do the work. He was cheerful, friendly, and seemed knowledgeable about the work he was about to do. The work was completed within a reasonable time and was appropriately priced. Upon arrival, George asked me to show him the location of the blowout points and the valve boxes. He then ran a line from the usual trailer-mounted compressor with regulator valve and pressure gauge and used an adapter to attach it to the hose bib. After which he turned on the compressor and opened the valves in succession to blow the air out of the sprinkler heads. This was the same procedure and similar equipment to what my old contractor used, but George charged less. During previous years, I hired the contractor that originally installed the system to do the winterization; however, the old contractor charged a high fee for such a small sprinkler system. George was willing to do the same work for a much more reasonable fee (half). I was able to get in touch with George with the first call. We arranged for him to do the service on Friday afternoon. I waited for him at home but around 5:00 pm he called and left the message that he would not be able to make it and that he would come by Saturday morning. On Saturday morning he called to say he would be at my house at 11:00 am , which he did. Overall, my experience with Dyer Property Maintenance was very positive and I would certainly use in the future for sprinkler winterization.

Founded in 1979 by Brad Scheele, The original S&S Seamless Raingutters was one of the very first providers of seamless extruded gutter in the Treasure valley. I purchased the brand in 2022 and assembled a solid team of installers and we have not skipped a beat. We even have Brad out working with which is a real treat! We respond quickly, we are courteous and most of all we strive to treat you how we would like to be treated. The Name "SS Seamless Raingutter" may be new but the tradition of quality service at an affordable price has not changed. Please see or new website at SSraingutter.com or reach us at 208-888-6473.  …

Western Heating and Air Conditioning has served the residential heating and air conditioning needs of the Boise Valley since 1967- new construction, remodel, add on, and retrofit. Stop and see us any time. Plus Western is proud to be a Factory Authorized Dealer of quality Carrier products. Carrier - turn to the Experts  …

Here at Elite Rooter we pride ourselves on our 5 star Elite service. From our office staff to the Techs in the field, our promise to provide our customers with an outstanding experience and an ease of mind knowing they have a whole team of Professionals in their corner to provide a long term solution to the unforeseen issues that arise and at a competitive price.  …

Dyer Property Maintenance Llc. is currently rated 4.9 overall out of 5.

No, Dyer Property Maintenance Llc. does not offer eco-friendly accreditations.

No, Dyer Property Maintenance Llc. does not offer a senior discount.