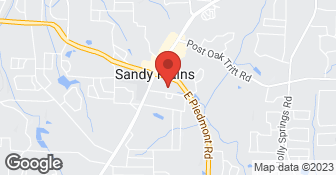 Both Nick Marine and Tony Little are retired U.S. Navy Chief Petty Officers , a team you can trust! Nick creating Marine Plumbing in 1992 and Tony joining shortly after, proudly serving Cobb, Cherokee and North Fulton counties ever since. Combined both Nick & Tony have more than 60+ years of Plumbing expertise between them! Along with our team of Najee, Jonathan, Austin, Ryan and Andrew we can solve plumbing jobs big and small. Specializing in tankless heater installation as well as service. We are gas experts as well designated as an (NGAD)Natural Gas Advantage Dealer by Atlanta Gas/Southern power companies....

I hired Marine Plumbing Service to replace my kitchen faucet with one I purchased elsewhere and also to replace my home's water pressure regulator. The existing kitchen faucet was shot after 8 years because it loosened under the granite counter and rusted the hardware underneath. That made it wobble mercilessly and allowed water to seep down into the cabinet beneath. I don't have the tools for such a tight space to get at - much less remove - they faucet. Thus my call to a professional. They were able do that removal, install the new (touchless) faucet, and maneuver the battery pack to a spot inside the cabinet to allow easy access for battery replacement. The faucet is installed securely and works as advertised. Additionally, my 9-year-old water pressure regulator was malfunctioning. The problem became apparent when experiencing intermittent high pressure of water at our faucets and toilets. (Sometimes the water pressure was too powerful, other times normal.) Nick Marine made some recommended changes on the placement of the new pressure regulator, having it installed horizontally on a ceiling pipe rather than vertically on the wall pipe where the original had been. He believes that configuration will make it last many years longer. I really won't know how long this one will actually last until 12 or 15 years from now. He set the pressure at 63 psi. So I'm hopeful I now have a long-term solution. While replacing the pressure regulator, they also installed (with my agreement) a new, better quality incoming water on/off value on the piping coming into the house from the street. And Nick offered a few recommendations concerning my water heater to make it safer, actually doing one of the changes without any additional charge to me. His knowledge of residential plumbing standards and quality of workmanship are impressive. His work is not inexpensive, but likely to well outlive that of many other plumbers.

[Member Name Removed]-Thanks for taking the time in preparing such a detailed review! Glad we were able to resolve your plumbing needs, please call on us anytime. Nick
5.0

Good! Working great again! I think their technician really knows what he is doing and has very experienced.

[Member Name Removed] Thank You for the kind comments. Yes, it takes a lot of time and money for us to attend the many tankless classes to be highly trained in tankless as we are. Thanks again Nick Marine
5.0

Tony Little put down his lunch and came immediately after we agreed to a price of $375 before coupon. He fixed the pipe and offered welcome and knowledgeable information. What amazed me and makes certain I will call Marine again, is Tony called a few days later to check on us and he told me he had added a water shut off valve that I can now reach! Thank you Tony for your work and your kindness.

Glad we were able to assist you and appreciate the kind comments. Nick
3.0

They never called me back. Disappointed in their lack of response. After an A rating on Angie's List I expected better than this.

Description of Work
Cap off hose bibb and add a water line.

[Member Name Removed] Neither Tony nor I ever received your voice message. In addition, no email sent to us and /or to Angie's list email either ? We always return calls and leave messages even when we are busy with other clients. Thanks Nick
5.0

Tony was fantastic! Responded immediately to my email and scheduled appt quickly, arrived promptly and discussed my issues professionally. He completed the work and even went above to brace the old pipe to the wall which had previously been hanging a bit loose. He was very helpful, knowledgeable and friendly and the price was very reasonable. Will definitely hire again!

Description of Work
Advise on a leak and replace outdoor water faucet, ended up with replacement of very old pressure control valve

[Removed Member Name] We appreciate your business as well as the kind comments. Nick Marine
5.0

I have used this company before and every time they amaze me with the quality of work they perform. I work in the service field as a licensed electrician and these guys always exceed my expectations. It is very hard to find a company and its employees that take pride in their work. Marine Plumbing is a company that I feel is very well trained and experienced to handle all your plumbing needs. They did an amazing job for me in my home and I know I will have no problems for a very long time.

Description of Work
I need my plumbing redone in a new home I had purchased.

[Member Name Removed] We enjoyed working for you and appreciate you taking the time from all your meetings, classes, seminars etc... Nick
5.0

Very well. They installed a new hot water heater and replaced the original poorly installed plumbing that had caused it to fail prematurely. Also corrected faulty plumbing in other areas of our house.

[Member Name Removed] Thanks for the kind comments and we enjoyed working for you as well. Nick
5.0

It was an emergency call as I discovered my garage was flooded due to water pouring out of my hot water heater. I phoned Marine Plumbing Service and Nick Marine immediately talked me through how to cut off the water to the tank. Then he asked for specific data on the existing tank telling me where to find the info. Within an hour Tony arrived followed shortly by Nick with a new water tank. They worked together replacing the old tank, the ruined expansion tank, and the faulty pressure regulating valve. There was no existing gas supply shut-off valve, so they added that as well. They also did some rearranging in the close-fitting utilities closet for better access to both the water heater and the hvac system which called for some re-piping. I had called my son (a mechanical engineer) to drop by during lunch to help me determine water damage in my garage where I had a lot of stuff stored in cardboard boxes. While here he asked the plumbers a lot of questions and inspected their work giving them an A+ rating. Both Nick and Tony went out of their way to be professionally accommodating and helpful. They were very thorough in their explanations and in their invoice. They certainly left the utility closet looking and functioning a lot better than they found it, and I was much appreciative to have the problem fixed so well and in such a timely manner.

[Member Name Removed] Tony and I enjoyed working for you and appreciate the kind comments. Call on us anytime! Nick
5.0

It was a pretty simple job. They were very courteous, explained things thoroughly, and were meticulous in avoiding damage of any kind in our home. I got the impression that these were serious, engaged professionals and would happily work with them again.

Description of Work
Replaced a toilet.

[Member Name Removed], Thanks for the kind comments. Call on us anytime. Nick
5.0

Marine Plumbing provided excellent service. I originally hired them to install a hot water heater, then I called them back to do repair work and renovations to 2 bathrooms and a kitchen. It's easy to tell how knowledgeable they are, and they have integrity. I live in a condo that has some plumbing limitations, and they proficiently handled any potential setbacks. Their service was well worth the investment I made. I would refer them to anyone and call them back in a heart-beat.

[Member Name Removed] Thanks for you business and allowing us to help you with all your plumbing and remodeling needs. Call on us anytime. Thnaks Nick

We DO NOT offer drain cleaning, for plumbing that backs up and/or camera services.

Marine Plumbing Service Inc is currently rated 4.9 overall out of 5.

Are there any services Marine Plumbing Service Inc does not offer?

We DO NOT offer drain cleaning, for plumbing that backs up and/or camera services.