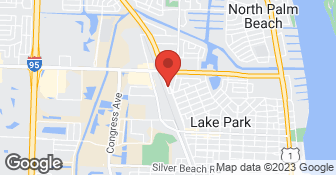 Restore Force Inc, is a full service FL state licensed contracting company specializing in structural drying, mold remediation, fire damage restoration and your everyday household issues. Located in Jupiter FL we are a customer service oriented business, where the customer in always number one. Our area of operation includes most areas within Palm Beach County. Feel free to contact us at any time day or night to set up a free consultation....

5 phone calls, two emails,over a 10 day period and none returned.

We reached out to Mr. [REMOVED MEMBER NAME] several times. Unfortunately we were unable to get back in touch with them and it was a simple game of phone tag. We're very bothered by the fact that our customer was unable to get in touch with us and have improved our customer call center since then to make sure that this issue never happens again. We truly hope that this review does not sway future customers from contacting us in the future.
3.0

They basically had the job done in 1 1/2 days. I was happy with that. Once they had demolished the area and cleaned up after themselves, the considered the job done. They were helpful in arranging other contractors to fix leak in roof, rebuild interior wall, etc. But the work they did was so much less than what they had estimated they would need to perform. I was surprised that they would not lower the price. I asked if the job had taken more hours than they thought, if they would raise the price. They said yes. I asked if the job took significantly less, wouldn't they lower the price, and they said yes but that had not been the case. When I asked (several times) for them to send me an indication for what hours they had worked, they sent me a fabrication...people working days when no work occurred, and the owner even indicated that he worked long hours on a day when the house was completely locked up. When I asked about this, I received no response. They were somewhat difficult in contacting, either by phone or email...especially when I had issues with the work done. After I had paid their final (and in my opinion $$ bill), I contacted them 3 times for a paid in full receipt that they said they would send. It has been weeks now, and I have given up trying to get a response. I would not hire them again, neither would I recommend them to anyone.

Description of Work
Knock out approx 100 square feet of drywall, to discover where a leak was occuring, and performed some anti-mold work.

James did a thorough leak inspection of the whole house with focus on the problem area where we discovered mold growth. He was great at spotting problem areas with the naked eye and used his thermal imaging camera in addition to a regular visual inspection. He made a lot of recommendations about the problem area and also located multiple other leaks that we did not know about. I was amazed at how many leaks he was able to find, not only in the exterior but also interior piping leaks. He also made a lot of recommendations about how to fix the problems. He was very professional and I would recommend him highly.

Description of Work
We had leaks which were causing mold growth on drywall/baseboard. Leak detection was the main objective.

The people who did the work were very knowledgable and experienced. The knew exactly what to do and how to do it.

Description of Work
They removed all mold and prepared walls for new drywall. I recommend this company for anyone needing mold remediation. Very professional work.

The technician was amazing, very professional and patient. He explained everything in detail and really knew his stuff. I was having difficulties with an excessive water bill and he narrowed it down to a change in programming of my sprinkler, took the time to explain it and made the changes. There was no pressure to purchase anything else, I even had to ask what their business model was. I was very impressed with his knowledge and capabilities, I highly recommend them to everyone.

Description of Work
A complete thermal scan of my home looking for issues with water and air leakage around the property.

My 144 gallon fish tank on the second floor of my house leaked in the middle of the night. I lost about 25 gallons of water which pooled on the hardwood floor and then leaked down through the concrete slab through drill-out holes for plumbing and conduit until it then soaked the insulation in my garage ceiling and eventually hit the drywall and leaked through to the floor of the garage. I called Restore Force after a recommendation from a friend and they came quickly to a**** the damage. The owner and one of his workers arrived together and both were very knowledgeable and friendly. Using an infrared camera, they were able to show me exactly where the water had managed to find its way in the floor and on the walls. They set up a commercial dehumidifier, two large floor fans, and a series of plastic mats with suction hoses to soak up the water in the wood floor upstairs. They also removed and reinstalled a few baseboards that had absorbed water too. They then removed 3 panels of drywall from the ceiling of the garage and all the wet insulation as well. After the drying equipment ran for a few days, they came and removed it quickly and cleaned up. The repairs were then completed in the garage. New insulation was put up and new drywall hung, mudded, and sanded. I had them leave the ceiling unfinished as I plan to just paint it myself with some extra paint I have in the garage. Overall I was VERY satisfied and would DEFINITELY use Restore Force again in the future and recommend them to anyone!

I was not happy with them. They were quite expensive and I didn't expect it to be that much. They are very, very fine young men but they were expensive.

Description of Work
I used Restore Force because I had a flood in my house. They pulled up all the flooring and sucked out the water. They had to take out a little of the drywall. They restored everything to a certain stage and then I had another company come in to rebuild the kitchen.

Unfortunately the costs associated with repairing water damage properly usually run high the important thing to consider is weather the job is being taken care of properly or not. This peticular job we most likely saved the customer money in comparison for what he would have paid seperatly for each service provided. We handled the entire job minus the installation of the new kitchen cabinets. We completed drying on the entire property in 4 days, once dry we replaced all the flooring associated with the loss. All the floors were upgraded, the baseboards were replaced to match remaining areas in house. All pricing was discussed prior to engaging in any work on the property. At Restore Force Inc we take pride in our customer service and workmanship. The services provided were well above industry standard, while following our company protocall to the T.
5.0

Restore force was at my house within 15 minutes and was able to take care of the job way faster than we thought was possable. Ther estimate price matched the price i was billed , and i was never harrased for the payment. The crew ended up being locals, and they were extremely polite to my whole family. If anything were ever to happen i would definatly use restore force again. I would recomend them to all my friends and neighbors.

Description of Work
It started off as water damage, and quickley was found out that mold had grown in an area of my home. They quickly closed off that section of the house. The caeaned the air, air handler, and all my vents. They had the house dry in 2 days and the mold removed in another day. They had AIRMD come to do a clearance test and they actually did all the lab work on site, and cleared the job wile they were there. Once that was they did the remodleing and it looks better than new. They were very fast and did not disturb our family as i thought they wouls. The whole process took a little over a week, we thought it would take 3 weeks.

ESTIMATES ALWAYS FREE Mold Removal & Remediation. We separate ourselves from the competition by being honest with our estimates. We do not exaggerate jobs, inflate cost, nor use scare tactics. Fully licensed and insured A+ Better Business Bureau since 2006 50+, 4.9 Star Google Reviews since 2006 www.MoldOnly.com  …

Mold remediation, water damage restoration, fire damage repair & board up. Our maintanance decision handles, window cleaning, pressure washing, home service plans, etc. When it comes to your home or business we are the pros...

Restore Force Inc is currently rated 4.4 overall out of 5.

No, Restore Force Inc does not offer eco-friendly accreditations.

No, Restore Force Inc does not offer a senior discount.

No, Restore Force Inc does not offer warranties.

Are there any services Restore Force Inc does not offer?