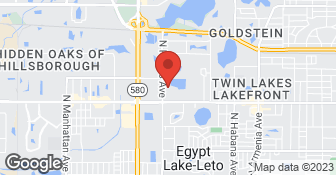 Heaven Sent Construction is a family-owned business that specizlizes in Residential & Commercial Construction. With over 8 years of experience, our main goal is customer satisfaction by providing reliable service & cost efficent options. We rarely use subcontractors, as many of are specialities our in house. All Estimates are free of charge....

Ms. [Member Name Removed], we apologize for the way you feel regarding the project we did for you in 2018. Our company takes pride in providing the absolute best experience possible for all of our clients. If there is anything that is not up to your expectations, please contact us at your earliest convenience.
5.0

Took longer than expected but finished product was absolutely beautiful and expertly finished.

Heaven Sent Construction truly was a blessing for our kitchen remodel. There are no words to express how pleased we are for having chosen this company. Not only did they come in on time and on budget, but they finished earlier then expected. HSC was one of four quotes we received for our project and they were the best value for our dollar providing superior products in comparison to the competition within the same price range . Their professionalism and workmanship exceeded every expectation throughout the entire project. Every appointment was kept promptly and we were kept well informed of their progress. The crew was courteous, well trained and they kept the workspace as clean as possible. Anytime questions or concerns arose, HSC collaborated with us to find the best solution and ensure we were pleased with the end result. Without a doubt, we highly recommend HSC and would use their services again for future projects. Thank You Heaven Sent! Ed & Debbie Lizarraga

Beautiful gut renovation of condo. This GC is wonderful. He communicated throughout the project. Delivered on schedule. He reached out when encountering anything he felt was important to address differently. His work is top of line. Joy to work with and would highly recommend.

very professional and quick to address any questions or concerns. Rooms worked on look wonderful!

Francisco and his crew were professional and honest. Great integrity and excellent work. I do not hesitate to recommend this company. The quote was right in the range of what was expected.. not the lowest, not the highest. We felt he listened to our needs and added some suggestions that were helpful. The work was started as scheduled and was completed on time... earlier than the contract. We were informed when workers would be coming. They were fairly neat. When we asked for extra attention in this area, they complied with no discussion. His subs were also excellent. We had electrical, plumbing, drywall, window installation, cabinets, counters, flooring, shower glass installation, HVAC, trim work. In the end, Francisco, just repeatedly expressed his desire that we be 100% happy with the finished job.. and we are.

Description of Work
Two full bathrooms were remodeled. One included demolition of walls and ceilings. An addition was created from an unused porch area. A walk-in closet was custom installed.

It was outstanding start to finish. I can't recommend Heaven Sent Construction enough! 1) On time and On budget 2) Quality and Speed of work outstanding 3) Trustworthy employees 4) Polite subcontractors 5) Professional back office staff 6) Best bid on my project compared with 3 other contractors, and fastest to get back to me with a quote 7) Text communication with Francisco and back office on details 8) Always felt like he was paying attention to my project

Description of Work
I need space built out for my new physical therapy office, that including demolishing a wall, building 2 new walls, adding a sink w/ hot/cold water lines, adding additional can lights in the ceiling, and re-doing ceiling tiles and wood flooring to match the rest of the building.

They were great. They prepared the walls and textured. Very clean and considerate. They were responsive to concerns and worked with us to make it right. They primed and painted. Very impressed at how quickly and professionally done as we were on a tight deadline. Thank you!

Description of Work
Prepared finished and new walls. Textured walls, ceiling and around windows. Primed and painted walls and ceiling.

I worked with Megan over there a lot. They were punctual, the quality of the work was good, and I felt comfortable leaving them alone in my house to do their work.

Description of Work
They did some painting and flooring work inside my home.

Juan has over 27 years of experience in providing quality stucco work. He takes pride in each job and customer satisfaction is his number one priority. Call today for your free estimate.  …

Polson Painting is a locally owned family run/operated painting company serving the Hillsborough and Pasco Counties for over 25 years. Our services include, but are not limited to for commercial and residential properties; interior and exterior painting, minor wall/ceiling repair, some wall paper removal, cabinet painting, pool/cool deck painting, pressure washing and more. When you hire Polson you hire our entire family to support you on your project. Some projects will include a color consultation as well as our staff will be happy to assist with color selection and recommendations to share with you, and also provide up to 3 free color samples on most projects. We have the staff to handle small and large jobs and will treat all the same. Polson Painting will be there to make your repaint or renovation as organized and stress-free as possible. We are dedicated to customer satisfaction and our goal is to be your painter for life. We are fully licensed and bonded and carry all necessary worker's comp insurance as well. We pride ourselves on our strong customer service and if for any reason you are unhappy with the result of your service, please let us know immediately so we can do all we are able, to earn another happy customer. It is not just our desire to have satisfied customers, it is our mission.  …

At JJJ'S we believe that customer satisfaction comes first. Certified and fully insured we offer a well -trained crew to provide every commercial and residential customer with professional painting and cleaning services. Attention to detail is our trade mark and we strike for 100% customer satisfaction. We offer competitive estimates to match every customer needs. Our goal is to provide superior services to each customer & facility efficiently and professionally. We look forward to hearing from you.  …

Please note we are not a handyman service.

Heaven Sent Construction is currently rated 4.6 overall out of 5.

No, Heaven Sent Construction does not offer free project estimates.

No, Heaven Sent Construction does not offer eco-friendly accreditations.

Are there any services Heaven Sent Construction does not offer?

Please note we are not a handyman service.