This review is long overdue! In August of 2020, some squirrels were scrambling around on my roof and one unfortunate squirrel fell down my 2-story chimney and became trapped right above the fireplace. At the time, I heard scary sounds coming from the fireplace and was terrified, not knowing what sort of creature was in there! After being disappointed by a different company who sent a salesperson out but never showed up to do the actual job, I was fortunate enough to call On Point Wildlife Removal. The owner, James, came out the same day and located the squirrel right away. He and his helpers removed the squirrel within an hour of arrival. This was remarkable as the other company had kept me waiting for three days! That was one angry squirrel, but they handled him with skill and treated him in a very humane way. They gave him water, wrapped him in a blanket, and took him off to relocate him. They also sealed the chimney to prevent further incidents, set traps around the attic to make sure no other critters were there, and sanitized the chimney area. The person who monitored the traps, Emil, was extremely courteous and always texted before stopping by to make sure it was a convenient time. Overall, the whole team was exceptionally courteous, upbeat, and professional. I highly recommend On Point Wildlife Removal for help with unwanted critters!

Description of Work
Removal of a squirrel that fell down my chimney!

The staff was friendly and professional and did an outstanding job. I paid a fair price for the services and would hire them again.

Description of Work
Remove and/or exclude raccoons residing in the attic, and repair exterior damage.

Thank you [Member Name Removed]for giving us the opportunity to help solve your problems, we're proud we were able to live up to your expectations.
1.0

I went with another company. This one never contacted me, but Animals in the Attic did quickly.

Hi [Member Name Removed], why are you leaving us a negative review if you have never done business with us? This "review" is not fair to leave and hurts hard working people and the ability to put food on our table.
5.0

Removed and no further issues.

Description of Work
Squirrels in attic

Thank you [Member Name Removed] ad it was a pleasure to work with you.
5.0

Mike was professional, showed up on-time every time to perform the trap checks. Excellent service and highly recommended, would not hesitate to use agin or recommend.

We agree that Mike is a very vital part of our team and we couldn't be happier that he was able to help you out with your rodent and squirrel removal, thank you for taking the time to leave this review.
5.0

Very well. James returned my call promptly and explained the entire process what would be done. He and his employee was very professional and polite.

[Member Name Removed], thank you for your business and we appreciate you supporting your locally owned companies.
5.0

It went very smoothly, from my initial call to their office. Jerry answered the phone and was very polite, he explained that he could have somebody out the next morning (it's was 3:30pm on a Wednesday when I called). He also briefly explained how the process works, and that an inspector would be out to visit me and ***** the situation, I was provided a 2 hour window when to expect James (the inspector), and that he would call on the way. The next morning I got a call from James when he was on the way, and showed up at my house exactly when the appointment was for. He got on my roof and in my attic to inspect it and showed me pictures of how the animals were getting in (I had been hearing scratching noises at night time). He went over in detail all the entry points, their trapping measures to eliminate the pest, and how they would seal my house and clean up the rat droppings when finished. Over the next two weeks I saw James and his crew many times and they were always polite, professional, and clean cut (their uniforms were always professional and neat, even though they are in a very dirty business) it was nice to be able to tell them apart from other contractors or people on the street because of their bright blue and orange trucks and uniforms, as an elderly woman, it made me feel safe knowing they were professionals. They did an excellent job, never left a mess, got all the rodents out and did exactly what they promised. This company isn't the cheapest in town, but they do a phenomenal job, and they are worth every penny of you want a job done right and not have to worry about a fly by night company. You get what you pay for, there's a reason so many people in my neighborhood have used them, they are very honest and truthful. They also suggested I could help with energy cost by adding a layer of insulation to my attic and they could provide insulation that is insect and animal resistant for a very fair price (I had already been considering this and already had quotes from other companies) , I will most likely be taking them up on their offer in the near future.

Description of Work
I needed animals removed from my attic (rats), and them sealed out and the mess cleaned up.

Thank you! animal removal and attic restoration are our specialty!
5.0

They responded to my phone call promptly. They were here when they said they would be. Very polite and professional. It turned out not to be a mouse problem, so no work for them to do, but at my request they inspected the exterior of the house to ensure that nothing else could get in - at no charge. I'd highly recommend them for their promptness, professionalism and honesty.

Description of Work
Thought we might have a mouse problem.

Professional and quick. On point helped after another company failed and released a trapped raccoon back into our attic. Quick response time.

Description of Work
Removal of wildlife

It went fantastic, this company did every single thing they promised, when they said they would and to the exceptional quality level they promised.

Description of Work
Raccoon removal and attic restoration, including repairing the hole it made and got into my roof.

I had what I thought was squirrels in the attic. I called another company first, they said that they could send somebody out for a free inspection. When they arrived they just looked "rough", they were dirty and their clothes were torn (I understand it's an animal removal business, but they looked homeless,even their company provided hat was faded from black to a greyish brown, yuck). They didn't seem to do a very good inspection, they didn't even go in my attic. I decided to get a second quote, I saw On Point Wildlife on my Facebook feed and they always seemed responsive to questions asked and answered very honestly from what I could tell. They seemed like they had a much better image than the other company. They came out and gave me a fair price, including a senior discount of 10% and had the job complete in less than two weeks. They also gave me a 1 year warranty. Highly recommend their professionalism and quality of work.

Description of Work
I thought I had rats, and needed somebody to come look at my house and attic.

It went very well, I called for the free inspection. James came out the next day and spent about 30 minutes doing it, including spending about 15 deep in the attic itself (even during this heat, he was soaked). Turns out an Opossum had gotten in the attic, he jokingly asked me if I wanted to go up there so I could see the damage for myself, I declined lol. But he did show me many pictures he took so I knew he was being honest. He set a trap the same day, caught the opossum within 24 hours and sealed everything up on my roof so nit doesn't happen again. He and his partner even sanitized and cleaned the attic as part of the services I purchased, which has was much less costly then a previous quote from another local company. Highly recommend.

Description of Work
Was hearing noises in my attic at night, scratching and digging sounds. Wanted to know what it was.

They showed up immediately, like within the hour. When my wife and I told them about the rats we saw running around next door, they started scouting the house. What we thought would only preventative measures quickly turned into placing traps. I was amazed at their knowledge, skill, and speed

Description of Work
We originally contacted On Point Wildlife for some preventative measures because rats and mice were running around our neighborhood. It turns out the rodents were much closer than we thought. 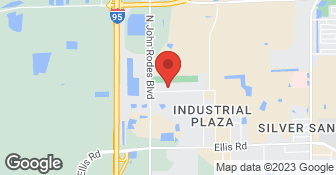 We will sanitize the workspace and all areas touched
All statements concerning COVID‑19 business operations and essential services are informational only, and are self‑reported and not verified by Angi.

How is On Point Wildlife Removal overall rated?

On Point Wildlife Removal is currently rated 4.9 overall out of 5.

What days are On Point Wildlife Removal open?

On Point Wildlife Removal is open:

What payment options does On Point Wildlife Removal provide

Does On Point Wildlife Removal offer a senior discount?

No, On Point Wildlife Removal does not offer a senior discount.

Are warranties offered by On Point Wildlife Removal?

What services does On Point Wildlife Removal offer?

On Point Wildlife Removal offers the following services: We specialize in removing animals from attics and homes, we offer rodent, bat, birds, raccoon, squirrel, rats, mice, even dead animal removal. After removal of nuisance animals, we locate and seal the open locations. Once animals are excluded, we then remove the feces and contaminants left by them, and follow with a hospital grade, anti-microbial sanitizer that kills and diseases and scent trails left behind that mat entice re-entry. In extreme cases we offer full attic restoration including insulation removal and replacement. We then back our services with a full warranty.

Are there any services On Point Wildlife Removal does not offer?