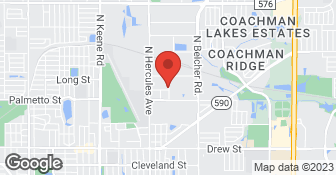 Home repairs and remodeling is what we get excited about, Handyman Connection is your single solution for that list of home maintenance that seems to grow longer every day. Whether you need something installed, built, fixed or maintained, we are your reliable and trusted partner for all your home maintenance, repair, renovating and remodeling needs. Your home needs expertise and we have the experts at Handyman Connection. At Handyman Connection of Clearwater, our mission is the same as yours — making your home a great place to live. As North America's original — and leading — home improvement specialists, you can rest easy knowing your home repair or remodeling job is in experienced hands. We're not just proud of our workmanship — we guarantee it. Additional Number: 7278588781...

They have been very good. We will use them again.

Description of Work
We have been using them for handyman needs for about 5 years.

Work began on 10/1/16. Craftsman claimed work was finished on 10/19/16. After inspection, craftsman agreed that work was not finished. It is now 10/31/16 and no further work has been done. I am just stating the facts from my experience.

Our craftsman was friendly, knowledgeable and helpful. He provided an onsite written estimate and scheduled the work to be done the NEXT DAY! The work was completed in the time frame of which he promised and the quote was almost dead on. Our materials ran a bit more then quoted but it was a very minimal difference. Our craftsman didn't leave until he had done everything I had asked and even "touched up" a few areas that I seen that weren't "quite" right for me. Pickiness maybe but he was kind and patient taking care of the issues. We had purchased flooring and brought it to our home to unload. He stopped what he was doing and jumped right in to offer a hand to carry in those heavy boxes so that myself and my husband didn't lug 35 boxes alone! We insisted we could do it but he wouldn't hear of it and helped w/out asking for anything! The work was to my satisfaction and the company was responsive to all of my questions, scheduling, etc.

I recently had a bathroom remodel job done by The Handyman Company. They were the low cost bidder, I should have known better. You get what you pay for. The person who did the work was clearly not detail oriented and frankly did a sloppy job. I would not hire this company again and am VERY disappointed by the results. Here are the issues: 1) The contractor did not show up as scheduled on the first day. He also did not consistently inform us when he would be in the house. 2) He left my garage, bedroom and pool deck area in a mess. I had all areas totally clean when the contractor arrived. When the job was finished, everything was covered by a thick layer of dust. The contractor should have worked outside on my pool deck as agreed. 3) The tile work was sloppy. The soap dish was installed at an angle (Not straight) and the shower tiles do not lay flat on the wall. The extra grout was not removed from around the seams in the shower or on the floor. 4) The tub was installed with a bend in the corner of the tub. The contractor said "he did not see it", but still did the tile work. the tub can't be removed without tearing out the tiles. The bend was obvious. Now I'm stuck with a damaged tub. 5) The texture coat was sprayed everywhere. I had to clean it off the windows, floors, etc. before I could paint. 6) The bull nose tile was cracked where the shower curtain rod was installed. 7) The shower curtain rod was installed so that it extended 6" beyond the edge of the tub. The curtain would have hung in front of the toilet if I left it that way. The contractor said "he thought it looked wrong, but followed the instructions". If it looked wrong, why did he do it anyway? I had to retrofit a new rod to make it work without drilling new holes and/or tearing out and replacing the tiles. 8) There was a big gap left where the new medicine cabinet was installed. I can go on with the more minor problems, but I would never use this company again. I had had to fix most of the issues myself. The company said that I should have called during the course of the work so they could have fixed the issues. Perhaps they were right, but I shouldn't have had to do this in the first place. UPDATE TO ORIGINAL POST: When their office staff called after the job to see if I was satisfied, I shared the information above. She indicated that she would share my concerns and get back to me with a remedy. No one ever called back. I called the office myself. The representative offered to "clean my garage" for free. When I asked him what he intended to do, he said that he would use a blower to remove the dust. Use a blower!? This made no sense. How would you remove dust from items without contaminating everything else. I declined his offer; I had had enough at this point. The clean-up of my garage took seven hours of my time to vacuum, wash and/or wipe down my possessions. Bottom Line: Don't use this company for any major work.

Very well...arrived on time and completed the job rapidly.

He arrived on time and was very knowledgeable about what was needed. he made a couple of suggestions that I had not considered. I used 1 of them. he kept the work area organized and cleanup was excellent when he was done with the job.

Description of Work
remove and replace the side entry in the garage. included priming, painting and removing and replacing all trim.

I called them two minutes before they opened. She put me on hold for a minute. I spoke Amy who took down all of my information regarding a broken window I had. She said someone would call me back, so I asked about how long that would take. She said it would take about an hour to an hour and a half. I called them back after an hour and a half, and they tried to take down all of my information again. Again they told me they would call back, so at that point I thought it was useless to try to work with them. Since then they have called me multiple times. I have told them no one ever called me back to do the service, and I don't want them to continue calling. It's bothersome that they keep calling about it when they have never completed the work. They also told me that their office was closed that day, and it was an answering service that took my information.

Description of Work
I wanted them to fix a window for me.

Very professional and good jobs, and cleaned up after each job

This is the second time I have used Handyman Co. and been very please both times. I had two different repairs done to two houses. The other job was to replace the front door. Turns out there was a lot of rotten wood in the frame that had to be replaced. Price was $700 and included all materials and supplies (new door, wood for new frame, paint etc.) Job was done quickly, efficiently and new door looked great. Tenants in both houses were very happy with the quality of work, the punctuality, friendliness and professionalism of both of the workmen. As the owner of the houses they were very helpful, and promptly took care of the needed repairs, saved all receipts for materials and gave me a fair price. I highly recommend this company.

Description of Work
Replaced a broken window with a new one.

We work with excellence and professionalism. We have more than 10 years of experience doing interior and exterior painting and we guarantee them great satisfaction and very reasonable prices. We pride our company on reliability, great communication, integrity, and quality work. We are experts in our trade and will do our best to keep you as educated as we can on your particular task or project.  …

Taino Painting, L.L.C is locally owned and operated out of St. Petersburg, FL and servicing surrounding areas. We provide a wide range of residential painting services and our skills are unmatched. We look forward to bringing life back to your home! Give us a call or click for an estimate today.  …

All statements concerning insurance, licenses, and bonds are informational only, and are self-reported. Since insurance, licenses and bonds can expire and can be cancelled, homeowners should always check such information for themselves.To find more licensing information for your state, visit our Find Licensing Requirements page.
General Information
Free Estimates
Yes
Eco-Friendly Accreditations
No
Payment Options
Check, Visa, MasterCard, American Express
Warranties
Yes

How is The Handyman Company overall rated?

The Handyman Company is currently rated 4.4 overall out of 5.

What days are The Handyman Company open?

The Handyman Company is open:

What payment options does The Handyman Company provide

No, The Handyman Company does not offer eco-friendly accreditations.

Are warranties offered by The Handyman Company?

What services does The Handyman Company offer?

Are there any services The Handyman Company does not offer?