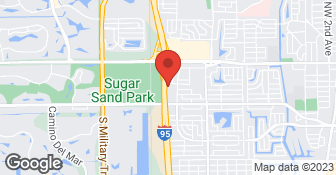 Signature Restorations is a division of Signature Builders Unlimited, Inc., located in Boca Raton, Florida. We are fully licensed and insured and here to assist you with your needs in accessing the damage and providing the services to restore your property in all ways required....

A friend recommended we work with this company. The owner came to our home in the evening after a major storm had passed. We could not tell where the water was coming from but he quickly identified the water coming through the window frame due to the roof leak. Our entire living room baseboards and walls were affected by the water. They set up machines in our living room to draw out the water from the walls and baseboards. This definitely helped to mitigate any damage from mold. We could feel the moisture in the drywall and baseboards in the beginning but it improved dramatically with these machines. The owner coordinated all of the insurance claim work and kept us informed throughout the process. He also oversaw all of the repair work ensuring the completed work was perfect. Andy is trustworthy, conscientious and I always felt comfortable having him in my home to supervise the project when I was not there. He is a true professional and gave us peace and confidence throughout this ordeal. I would definitely call him again if I ever need this kind of help. I highly recommend his company.

Description of Work
We had a roof leak that resulted in major water damage in our living room. We needed help drying out the room (baseboards and walls), repairing the water damaged areas, making sure all traces of mold were removed and helping with the insurance claim process.

The owner, Andy, was very kind, helpful and compassionate. He was able to work with my schedule since the job required me to find other living arrangements while the work was being completed. He took my medical challenges into consideration and was able to complete everything within a timely manner. He is not only professional, but a pleasure to work with. I highly recommend him to anyone. Going through a process such as this is difficult as it is, but Andy is one of a kind and will make enduring this process as easy as possible. He is even keeled, reassuring and has the unique ability to quell any concerns one might have.

Description of Work
It was a two part job. Part A - consisted of taking a sample slide and sending it to a laboratory to make an assessment of the evidence of mold. He then began the process of drying out dampness in the bedroom. Part B - After the laboratory results came back showing evidence of mold he started the repair process. He had a gentle and kind demeanor and laid out a plan. That is when he took my ADA circumstances into consideration; gently and compassionately delineated what needed to occur next in the process.

Andy and his crew are the BEST! Excellent work not to mention the awesome price, so respectful of my home and making the process livable, I have a son with cerebral palsy he needs electricity and water, they worked around him to make sure he was still comfortable and happy! LOVE THEM!

Description of Work
They remodeled our kitchen. They got rid of all the mold and water damage that we had.

Overall the experience was non eventful until I saw how much Signature Mold testing was charging my insurance company. I was appalled. The story is: While away for the summer, when I came home SMT was downstairs and asked to see my apartment there was a leak downstairs. After a preliminary look and short discussion, I was told I needed 5 dehumidifiers in my apartment for one week, or more. I was never told of the cost of these machines, and I didn't ask. I was told several times, you will not be paying the insurance company will. I went ahead with what the sale man (owner) suggested. While having these machines in my apartment it was like living in a generator room. I NEVER noticed a difference of anything except the noise. I never saw a meter, which he stated he used to measure mold etc. When my bathroom was being remolded, there was NO mole present, no signs that it ever existed. Yes on the shower tile there was that everyday small amount of mole from an 20 plus year old shower, but nothing behind the tile or under the shower drain. Down the line my insurance company received bill in the amount of over $6000.00. Also the apartment below me is also being billed. After making inquiries of other mole companies, my result showed I was seriously over charged. in my opinion i cannot recommend Signature Mold Testing.

Description of Work
An inspection of my bathroom, took samples, placed 5 dehumidifiers in my home, and checked on them during the week they were in my home.

Water Restoration Guys, with over 30 years of experience, is your all-purpose emergency and cleaning experts. We have been providing emergency services 24/7 to government, residential and commercial properties across the state of Florida. From water and fire damage to COVID-19 decontamination and much more, the Water Restoration Guys' licensed and insured technicians have the experience and skills to attend all the needs listed below, whenever you need us. Our team can gladly manage your case directly with your insurance company. We have the expertise you need in order to have the peace of mind you want and the ability to get the job done right, just let us know your emergency or situation and we'll take care of the rest. In this new era focused on health and environmental consciousness, the consumer market demand for green cleaning services helps us be at the forefront of the competition by using the highest standards for equipment, sustainable processes, and non-toxic branded cleaning products. At Water Restoration Guys, we care for the environment and work hard to maintain a responsible green philosophy.  …

Welcome to My Remediator! We offer FREE inspections to all of our clients and we are extremely thorough. We are one of the only companies that focus on educating our clients vs selling them services they may not need. Its an unfortunate truth that a disaster whether big or small will happen to everyones home. We can help educate you on how water damage and mold damage affects your home and explore all of your options. Some options may include using your homeowners insurance policy to cover the cost of repairs. We always advise our clients to have us inspect their home and policy BEFORE contacting their insurance, insurance policies can be complicated and we want YOU to have all the facts before contacting them. Here is a few tips on choosing a contractor: Check their online presence, do they have reviews on multiple platforms (google, Angies list, home advisor) Are they professional, uniforms, business cards and website. MOLD REMOVAL-WATER DAMAGE-MOLD TESTING-FREE INSPECTIONS My Remediator LLC is committed to excellence in every aspect of our business. OFFERING FREE MOLD INSPECTIONS and $200 AIR OR SWAB TEST: We will send a technician to your home to do an assessment on your mold or moisture situation at no cost to the home owner! Mold testing, assessment and full protocol provided for $200 ! Samples are then sent to an accredited 3rd party laboratory for incubation and analysis. Our certified mold experts employ state-of-the-art equipment for visual, surface and air testing to collect a variety of samples throughout your home or business. THERMAL IMAGING MOISTURE METERS ZEFON Z LITE SAMPLING DETECTION KIT CALL TODAY TO BOOK YOUR FREE MOLD ASSESSMENT 954 604 0221  …

All Dry Services of Palm Beach

If you find yourself needing emergency cleanup or remediation services after storms, flooding, or mold leaves your property damaged, contact All Dry Services immediately so we can get started on restoring your home as soon as possible. As a full-service damage restoration company, we offer emergency response 24/7 for both residential and commercial properties in the Palm Beach area. We provide top quality service and 100% guarantee our customers’ satisfaction. https://alldrypalmbeach.com  …

How is Signature Restorations overall rated?

Signature Restorations is currently rated 4.2 overall out of 5.

What days are Signature Restorations open?

No, Signature Restorations does not offer eco-friendly accreditations.

Are warranties offered by Signature Restorations?

No, Signature Restorations does not offer warranties.

What services does Signature Restorations offer?