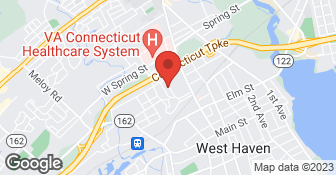 Our non-electric dog fence is comprised of 12 individual components. It is a REAL physical fence that can be assembled by any homeowner or professional installer which we can provide. Our fence acts as a flexible net that inhibits dogs and other animals from climbing. The bottom material is flared in towards you and secured with uniquely shaped ground stakes to create a dig guard. You don’t have to dig any holes, mix cement, or make any changes to your landscape....

Pet Playgrounds installed a 6 foot fence in our backyard to create a safe play area for our dogs. The work was done quickly, the price was reasonable, and the fence has held up well to all kinds of weather. It is by far the best fence we have ever had, and I feel better knowing that when the dogs go outside, they are safe and secure.

Was very excited about animal fencing. No response from messaging and no answer for phone.

It's three weeks after receiving the fence and they haven't yet scheduled installation.

Description of Work
There was a slight delay in the arrival of the fence. Not a problem. However, it's now more than 3 weeks since receiving it, and they haven't yet scheduled the installation.

Harder than billed but ultimately my husband did by himself. Tried to get them to help us find a contractor to no end.

Description of Work
A pet fence

Had to call to get a response on delivery of fencing after 3 weeks. Fencing arrived, but missing critical components. Later found same components much cheaper at Trident Corp. Never heard back from Pet Playgrounds when I called/emailed about an additional fence.

Description of Work
Fencing for my two large dogs

Went well. Slight hiccup with supplies, but Rafael came back the next day to finish. He was great.

On time, very quickly done with very little hassle. No uncharges from the quoted price.

Description of Work
Large backyard fenced for a new puppy.

I am having handymen put fence up on April 13th. Half the price of their installation. Will see what kind of quality the fence and function is.

Description of Work
I ordered the fencing, but it did not get here, but in separate shipments. Took 2 weeks. Installation services of theirs is too expensive.

It has been really good. They provided instructions for how it works. They extended it from the back yard to the front yard. They were very thorough for all of it. The only eye sore is when they left, they planted a really big, ugly pet fence flag in the yard. It was a little much. They were on time. I know they were here early in the morning and they left in the afternoon. It took them 4-5 hours. They had set everything up and put flags for where the wires were going to be under the ground, so we knew where the dog could and couldn't go. They cleaned up after themselves after they were finished with the job.

Description of Work
They put a pet fence in for our dog.

They were terrific. The install was a bit more complicated then they originally expected. Had to come back a 2nd day with 2 people. They did not charge me an extra penny! I have two little escape artists and this fence really works. I have it a few months now and trust it more every day. These guys also love dogs, and were playing with my guys thru the entire install. They also set the fence up so one of the corners could come down easily because we knew we were going to have a rather large dead tree taken down, and the fence was going to be in the way. We got the fence down and they came to put it back up the next day. Only charged me $100! They are great to work with. I also priced out my yard with chain link fencing. it would have been almost twice the cost. One more thing, one night a large animal (we think a deer), tied to get through the fence. Fence buckled a bit, a couple of the ground spikes popped, but it held back an animal of a few hundred pounds. It fixed up easily too.

Description of Work
I had a difficult area to fence. I have it running through treed areas with lots of bends and turns. Not to mention the whole area has shallow bedrock. I had them install about 350 linear feet of the fencing.

WE ONLY DO INVISIBLE/ELECTRIC FENCING -- Established in 1998, we are a licensed, insured, locally owned & operated business with a focus on customer service & satisfaction. We are licensed by the States of Connecticut and New York, where we also carry full liability insurance coverage. We have the latest technology offered in our industry and are the largest Freedom Fence dealer in the United States. We will always help train your dog, to get accustom to the fencing, to put your mind at ease. Our dog, Roxy, is loved by all of our customers. Free financing is available if you qualify and we offer discounts for Angie's List members (check out our coupon offer). Give us a call for all your invisible/electric fencing needs today!  …

ATTENTION - WE ARE OPEN AND WORKING - Hello and welcome to our Angie's List page! As you already know, our company is called Rockland Fence LLC and we provide residential and commercial fencing solutions for safety, privacy, security and beautification. Rockland Fence installs many types of fence including steel, aluminum, chain link, vinyl and wood. Rockland Fence services all of Connecticut and can provide all of your fencing needs including privacy, pets, estates, arbors and pergolas, hand railings, wood guardrail, tennis courts and more. Thank you for taking a look at our company and please contact us with any questions or to set up an appointment for a free quote!  …

I started in 1995 with my brother after our own Two dogs were chasing the UPS trucks down the road, and having fun doing it. It was then we decided to call a pet containment company to get a quote. I was shocked, I knew that there were many pet owners like me who would not or could not pay that amount. I also knew that we could do better if we checked around, we contacted a distributor and started our own business Over the next 20 years 3,000 systems installed and trained over 5,000 dogs to our system we have the most experience in this field. We pride ourselves in being a small company that provides one on one service to our customers. 20 years later, I am fully hands on with my crew installing and personally have trained every customer's pet from day one. Put your trust in us, and we will not disappoint.  …

No License Required for Trade
Insured
All statements concerning insurance, licenses, and bonds are informational only, and are self-reported. Since insurance, licenses and bonds can expire and can be cancelled, homeowners should always check such information for themselves.To find more licensing information for your state, visit our Find Licensing Requirements page.
All skilled traders and home improvement contractors operating in the State of Connecticut are required to be licensed or registered by the State Department of Consumer Protection. License or registration identification is required to be on all advertising, business cards, signage, and contracts. You can check to see if a contractor or tradesperson is licensed or registered by going to:https://www.elicense.ct.gov/
General Information
Free Estimates
Yes
Eco-Friendly Accreditations
Yes
Payment Options
Check, Visa, MasterCard, American Express, Discover, PayPal, Financing
Senior Discount
5%
Emergency Service
Yes
Warranties
Yes

Pet Playgrounds - West Haven is currently rated 4.8 overall out of 5.

Are there any services Pet Playgrounds - West Haven does not offer?