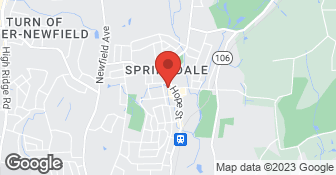 The Cleaning Connection, Inc. is a Stamford, Connecticut based cleaning and restoration company. Located in Fairfield County for more than twenty-six years, it is your first choice for all of your cleaning and maintenance requirements. Customer satisfaction is a number one priority at the Cleaning Connection, Inc. and our cleaning professionals are properly trained and supervised. We provide a quality cleaning service at a competitive price and look forward to working with you

I've been using them for years. Always reliable and trustworthy.

The crew was beyond fantastic. I called very last minute (day before) to get a crew in to clean the house before I moved in. They cleaned everything - the place looked and smelled beautiful - you just knew it was clean. They made the kitchen look like new, climbed to great heights to dust light fixtures, the bathrooms glistened. I can't say enough good things about the outcome. The crew was professional (all wore booties), had all their own equipment and was very organized - they knew what they were doing and they got it done.

Description of Work
Deep clean of a 5,000 sq ft home prior to my move in

Description of Work
cleaned all my windows and screens and sky lights. They did a great job.

They were fine and we would have used them but they were very expensive. The original cleaning was $350 or $400 and after that about $200 for every other week and that’s a lot. They seem very professional, very good and it was just financial. The extent of the work that they would do was a lot. They were thorough and good.

Description of Work
I had an estimate from Cleaning Connection Inc for house cleaning.

They arrived 15 minutes late. I helped them lift the bed and then I left because I had to leave as arranged previously with the booker. When I returned the home was clean, however I was billed at three times the estimate. The work that was completed was satisfactory, no better no worse.

Description of Work
They were hired to do a very basic cleaning on my 1500 sq ft house. I live with my husband and have no children or pets so our home is really clean. We hired him for dusting, vacuuming, and cleaning of the bathroom. He claimed that it would take one hour and gave me an estimate of $126.00.

Description of Work
We use the housecleaning services of Cleaning Connection.

i called for a quote the representative was very professional and informative. we are still thinking about using this company.

Description of Work
gave us a quote for cleaning. they send 4 people at $36 an hour. pretty competitive pricing for the area.

The people that did the work were nice. They did a good job but I dont think 4 were working the whole time. You cant fit the four of them in either of my bathrooms.

Description of Work
Cleaned. It took 4 people to clean 2 bathrooms, 1 kitchen, a living room and a dining room in a small house 3 hours and $450.

Description of Work
They cleaned my windows.

nothing to tell they came in the morning and left in the afternoon---they're heating ducts not a lot to tell here.

Description of Work
They did the duct cleaning and they were prompt and efficient and the price was very fair. We've know them for years. They did the house cleaning for a we elderly couple,who were a client of my wife's. I only mention that because I know they have a number of satisfied clients.

Cleaning connection's service is very professional. They are flexible and responsive. The cleaning crew is efficient and thorough.

Very happy with this company

Description of Work
Very professional. Will use them again

The original foreman was not organized and the crew did not clean the house thoroughly. They had to send another team and I had to watch them like a hawk to make sure they did the job.

Description of Work
for a 1600 sq ft house they charged way too much. I fought with them to come back a second time because they didnt do a good enough job the first time.

These guys were great! They were patient and responsive to all of my questions, accommodated my scheduling requirement, arrived on time and finished sooner than estimated . All at a good price. When they finished, as there was still time left in the day, I asked them if they could do the same cleaning procedure to the three landings and two sets of stairs, which they did without charging me extra! This was a specialized cleaning job but I would not hesitate to use them for any of the other types of cleaning services that they offer.

Description of Work
The Cleaning Connection was called in prior to the leasing out of two apartments in an old building. The apartments were HEPA vacuumed (carpets, floors, walls, windows and ceilings), an air scrubber was present and operational during the process, the walls. ceilings, window frames, sills and wells were damp wiped and checked against the EPAA defined cleanliness standards and regulations. They issued me a certificate stating the above and that their firm is certified to accomplish the protocols established by RRP (renovation and painting program) regulations and the thorough cleaning verification procedure to insure minimizing any exposure to lead based paint hazards was accomplished.

I called them, and 3 guys came out the next day and went right after the whole thing. It was a complicated job, but they had the right understanding of the problem and the right equipment. They did a very good job. They did it for exactly what they said would and when they said they were going to do it.

Description of Work
I used The Cleaning Connection Inc. They did air duct cleaning for me.

This company cleaned our house prior to us moving in. Although the final cost was well over the estimate given on the phone, the owner of the company was very responsive to my concern and negotiated the invoice with me. However, when I scheduled a routine cleaning, I voiced my concern with him about the overage from the first time. I asked for a refined estimate, now that his team had cleaned our house before, which he provided to me. Imagine my surprise when the invoice for this cleaning arrived and it was 50% over the estimate given (again) and well, well over what I would consider to be a reasonable amount to clean our home. I am paying this invoice, but I will probably not use this company again.

Description of Work
Our house received a routine (non-move-in or move-out) cleaning.

The dispatcher answered my call promptly and we were scheduled within 30 seconds. On the day scheduled three people arrived on time, they left 2.5 hours later. The place was spotless. I didn't have to watch over them to assure they did their job. They just did it. It cost a little more than anticipated because they came down to NYC from Conn. and there was travel time costing an additional $45. I'd use them again.

I decided to use another company, but everything went fine.

Description of Work
I called them to clean my home.

There used to be these two firemen that used to do window cleaning when they were off duty, but one of them must've moved and the number I had wansn't good anymore, so I had to find someone else. I knew that when I called a company it was going to be more money, but this was maybe four times of what I was used to paying. It may be the going rate, it just seemed a little expensive to me. They sent a lot of people is what is was, six people came to do the work, and I thought that was kind of silly to be honest. They had two supervisors and four people working, which was kind of overkill, and I kind of felt it was because of where I live more than anything else. I thought they did a good job, I just felt that they were over priced. Between all of the workers they spent 42 man hours doing the work, and thats too many. They were professional, nice people, and I was very happy with the work that they did.

Description of Work
I used The Cleaning Connection to clean my windows. I have a lot of windows, most of them are four panel windows, so all together there are probably 50 windows and 6 sliding glass doors.

They were ok, not particularly thorough, just middle of the road as far as cleaning services goes. The woman was very nice however.

Description of Work
They cleaned for me 1 time.

They were very good, they were reliable, and they sent the same crew every week. They showed up on time, they were honest, they were very careful and they really cleaned everything. I was at home when they did the work, but I know other people who would just give them a key. They are expensive, but I don't know how they compare to others as I don't usually have this service. I believe they charge $28 per person per hour, but I am not totally sure of that figure.

Description of Work
They cleaned my house for a month when our housekeeper was not available. The job involved cleaning bathrooms, kitchen and bedrooms, dusting and vacuuming, but no laundry. Our house is large with five bedrooms and six bathrooms. They had a crew of three who came for three hours.

Bonded
Insured
All statements concerning insurance, licenses, and bonds are informational only, and are self-reported. Since insurance, licenses and bonds can expire and can be cancelled, homeowners should always check such information for themselves.To find more licensing information for your state, visit our Find Licensing Requirements page.
All skilled traders and home improvement contractors operating in the State of Connecticut are required to be licensed or registered by the State Department of Consumer Protection. License or registration identification is required to be on all advertising, business cards, signage, and contracts. You can check to see if a contractor or tradesperson is licensed or registered by going to:https://www.elicense.ct.gov/
General Information
Free Estimates
Yes
Eco-Friendly Accreditations
No
Payment Options
Check, Visa, MasterCard
Senior Discount
No
Warranties
Ask for details

Cleaning Connection Inc is currently rated 4.4 overall out of 5.

No, Cleaning Connection Inc does not offer eco-friendly accreditations.

No, Cleaning Connection Inc does not offer a senior discount.

No, Cleaning Connection Inc does not offer warranties.