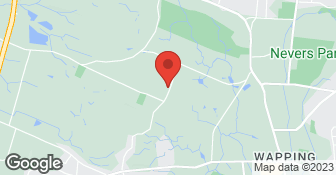 PLEASE CALL DIRECTLY FOR 860-521-7463 FOR QUICK, COURTEOUS RESPONSE! Over 30 years of experience in all areas of home improvements. Owner owned and operated.

Great - Steve showed up on time and did the work very well. Thanks!

Contractor gave initial review of work. Rate changed several times during work, increasing the cost exponentially to over $3,000. Contractor dumped vines and tree brush material in my backyard along with other chemical substances. When asked about it, he denied it until I told him I have video surveillance proof. Repairs are still needed to the porch as it was skipped over intentionally. The repairs that are needed sits behind the front steps, which he painted, so he knew that was supposed to be done. Contractor was more concerned with bigger jobs in other homes across the state instead of giving my home the same priority. I am a black home owner, and it seems that it is impossible to find a decent, respectable contractor to perform work on my property. I hope Angie's List reaches out to this contractor so that this doesn't happen to another home owner.

Description of Work
Front and Rear Porch Repair and Paint

Did extra work after being paid at no charge to customer. Told him that as the job progressed we might find more rotten wood and we did. Customers garbage cans were full and the customer was supposed to remove the vines and brush. He did not remove it. It wasn't dumped in his backyard, it was put into the woods. No chemicals were dumped.
1.0

No one ever contacted me from this company

Steve was great, responded to my request same day (on a weekend) and came out the next day to assess the job and give me a quote. Price was very reasonable and he did a great job. Would definitely hire again.

Great. They look like brand new. The job was done when agreed. I'm very happy.

Description of Work
Repair and stain deck and porch

Steve responded immediately, came the next day to give me a quote and assessment of what was needed, and finished everything within a week. They completed everything we had agreed to, were prompt and professional, and I’m very happy with the results. I will be hiring them again.

Steve was prompt and performed all work as we agreed in a timely and efficient manner. His pricing was very reasonable. We are very happy with the results.

Excellent. Four year old 16 x 20 ft deck had mildew and lots of peeling. Steve responded same day by phone, next day on site with quote and assessment of what was needed for a quality repair. Finished within a week. Looks great!

Hello, I have obtained a new crew to help me with the growth of my business.
5.0

Upon replacing the magnetic strip that had bee installed incorrectly by another handyman, Steve found that the shower door was bent and would not close properly. He suggested we have the shower door installers check the door as he thought we might have to replace it. He was correct we now have to replace the shower door. Won't hire other handyman again. Since we didn't have the correct caulk for the shower he will come back later to take care of the caulk issue. He didn't charge for the work he did. "I didn't fix anything so I am not going to charge you."

Steve and his crew did an excellent job. He and his assistant were prompt, professional and courteous. There were several jobs to do and they worked very efficiently and got the job done in no time. Steve gave me honest answers to my repair questions. They were respectful of my property and cleaned up when they were through. I was very happy with the work they did.

Did a great job! Got it done quickly too.

Steve and his assistant did a fantastic job reframing a window, replaced the siding on the back of the house, replaced the trim around the garage, installed a storm door and fixed front gutter. The price was good and I received quality work. Would definitely use his services again.

Description of Work
Misc. repairs around the house

Steve did a good job for a fair price and was very punctual and responsive. I plan on hiring him again for future work.

Steve and crew were professional and hard working. Completed job in very short time frame and with high quality. Always on time and managed expectations with clear communication.

Repair was completed efficiently and well. Would hire again for sure.

Actually did most of the planning over the phone. Job was done in good time as promised. They even included a downspout we hadn't talked about but DiD need changing.

Description of Work
Patched a large area in my garage with concrete.

Wow what a wonderful experience! Great workers and super nice. Efficient and talented with wood working. Opened up a doorway of mine 9 inches and put the sheetrock and trim up so fast. Filled the holes in my wood floors. Looks like they were never there! Cut porcelain tiles for my 170sq ft bathroom and grouted it. I am so happy with all the end results and for the price ,I got a great deal!

Justin returned my call & could fit me immediately. I have parts to purchase before I call him back.

Description of Work
Misc tasks; reattach the closure mechanism on the storm door, drill holes & mount the roller shades in the windows, etc.

Wonderful. Steve was incredibly responsive, friendly, and punctual. He knows his stuff and even chose the stain/sealant colors so my wife and I didn't have to agonize.

Description of Work
Need a deck stained and sealed. Half the deck was one year old unfinished pressure treated wood. The other half, the original deck, was more than a decade old and had last been stained and sealed about 3 years ago.

Justin arrived on time, removed the window that needed to be repaired, put a temporary piece of insulation in and told me he would inform me when the window would be ready. Once again, he was exhibited professionalism and courtesy.

Description of Work
A window needed to be repaired/replaced.

We are LNJ Home Improvement, your local gutters, siding and roofing specialists. We've been in the business for X years doing quality work at a quality price. With something so important for your home, we know it is all about getting it right the first time. If you're looking for a timely and communicative contractor who has an eye for quality, look no further! Si hablo espanol! DIRECT LINE: (203) 217-9670  …

i am the owner of p.a painting services llc, my company is 4 years old and i have 9 years of experience, i have good price and my specialty and exterior and interior painting, power wash, wall, ceiling repair.  …

Insured
All statements concerning insurance, licenses, and bonds are informational only, and are self-reported. Since insurance, licenses and bonds can expire and can be cancelled, homeowners should always check such information for themselves.To find more licensing information for your state, visit our Find Licensing Requirements page.
All skilled traders and home improvement contractors operating in the State of Connecticut are required to be licensed or registered by the State Department of Consumer Protection. License or registration identification is required to be on all advertising, business cards, signage, and contracts. You can check to see if a contractor or tradesperson is licensed or registered by going to:https://www.elicense.ct.gov/
General Information
Free Estimates
Yes
Eco-Friendly Accreditations
No
Payment Options
Check
Warranties
Ask for details

How is All Home Improvements overall rated?

All Home Improvements is currently rated 4.8 overall out of 5.

What payment options does All Home Improvements provide

All Home Improvements accepts the following forms of payment: Check

No, All Home Improvements does not offer eco-friendly accreditations.

Are warranties offered by All Home Improvements?

No, All Home Improvements does not offer warranties.

What services does All Home Improvements offer?

Are there any services All Home Improvements does not offer?