We are fully open and offering Complete COVID-19 Sanitization 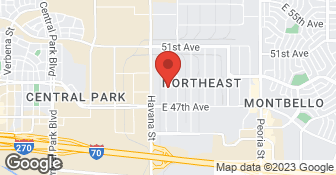 Terrible ! This company was hired to remove mold/ water damage. When they left I asked was the bathroom habitable. The company representative said let the paint dry and then yes. They left a Hazmat type vinyl door taped over the bathroom door so I was unable to check myself. Upon checking the room later, I noticed they left the bathroom with three carpet tack strips with old rusty nails facing up. I called back to request that they come back to remove the carpet tacking strips. A simple and reasonable request I thought ? I left three messages that were not returned. When I finally spoke with "Jim" the " project manager" he stated to me that he had determined this to be safe. "Jim" was never out after the company representative stated he was done to actually see the "completed" project. What project manager doesn't lay eyes on the completed project ? "Jim" advised me "that if I don't walk close to the walls, I'll be fine" " I shouldn't complain" "most people don't complain about this " "Jim" became rude, loud, spoke to me like a parent speaking to a child and then hung up on me. I called back a woman answered the phone she, also, became loud, rude and hung up on me. See the pictures yourself and ask yourself would you want your bathroom left like this ? This company lacks common sense and common courtesy! All Pro Restoration needs to really reflect on the way they treat people and should treat people kindly and respectfully. "Jim" needs to learn to speak to women respectfully! Beware they are only nice until they get paid.

They were very helpful getting to the process. Excellent. Their office help me whenever I have a question. They were very supportive and very professional. I recommend them to other customer. They were here right on time.

Description of Work
They cleaned up water problem in the basement.

It was good. The people were very nice and very professional.

Description of Work
They cleaned up my basement because of water damage. They did air quality and tested some molds. They removed the walls and replaced them. And they fixed the flooring as well.

It done very well. They done it in a timely manner. They we're friendly and they work around their schedule.

Description of Work
Cleaning the carpet, disinfecting anything, cutting out parts of the drywall.

That was great. The lady was very nice and helpful. The communication is really good and informative.

Description of Work
They're just looking and preparing an estimate of redoing our basement.

Thank you, [Member Name Removed], for taking the time to write us a review. Your kind words are very helpful to our future/potential customers! We will pass your comments onto the rest of the team!
5.0

It went really well. They we're easy to deal with and we don't have any issue with them. They are great.

Description of Work
They got a water issue fix some stuff in the basement.

We have been painting in the greater Denver Metro area for eleven years, and have a strong resume of an array of successfully completed, projects both commercial and residential. We don't hire sub-contractors, and I always hear from my customers, about our employess; they show up to the job on time, ready to work, they are polite, respectful, and know what they are doing, they go about their work with, little fuss, and complete the job in hand in a diligent, professional and timely manner, the work site in cleaned everyday.  …

Elk Horn Painting is your premier painting company for Castle Rock, CO, and surrounding areas. We have a simple mission: do everything possible to make sure our customers are raving fans of our services. From the initial conversation to the final brush stroke, we strive to make your project as simple and hassle-free as we can.  …

How is All Pro Restoration overall rated?

All Pro Restoration is currently rated 4.3 overall out of 5.

What days are All Pro Restoration open?

All Pro Restoration is open:

What payment options does All Pro Restoration provide

Does All Pro Restoration offer a senior discount?

No, All Pro Restoration does not offer a senior discount.

Are warranties offered by All Pro Restoration?

No, All Pro Restoration does not offer warranties.

What services does All Pro Restoration offer?

Are there any services All Pro Restoration does not offer?